Past Is Prologue: Markets Start New Year on High Note

As January gets underway, it’s worth remembering that the month is named for the Roman god Janus. In ancient Roman myth, Janus is the god of beginnings and endings. He is depicted as having two faces, because he looks to the future and to the past.

The first trading day of the year reflected this duality. Traders on Tuesday looked simultaneously to the past year and the year to come — and they liked both views.

Major stock indices closed 2017 with their best performance since 2013. The main drivers: robust economic growth, healthy corporate earnings, and expectations of corporate tax cuts. All three positive catalysts are expected to continue in 2018.

Accordingly, the major indices on Tuesday closed in the green. The first week of trading typically reflects the trend of the markets, so today’s solid gains bode well.

In the holiday-shortened week ahead, keep an eye on market-moving economic reports. December payrolls and manufacturing activity top the list. The numbers are expected to be positive, but rising interest rates are a wild card. Wall Street is hoping for signs that higher rates won’t dampen growth.

That said, stocks were buoyed on Tuesday by data that suggest the global expansion will remain resilient. For the first time since 2010, global growth is “synchronized.” Every region around the world is growing. Europe is a surprise standout.

U.S. investors tend to give short shrift to Europe. That’s a mistake. Collectively, the euro zone’s nominal gross domestic product is €10.7 trillion (US$11.8 trillion). That makes the EU the second largest economy in the world if considered as a single country.

On Tuesday, good news from the EU helped lift investor spirits. The December euro zone final manufacturing Purchasing Managers’ Index (PMI) came in at 60.6, the highest since the survey began in June 1997. Any figure above 50 represents growth. Germany and France, the euro zone’s two largest economies, hit their highest manufacturing PMI numbers on record for 17 years.

Reports released Tuesday also indicate that global trade is in sound shape. In China, manufacturing growth unexpectedly picked up to a four-month high in December. New orders in the Middle Kingdom soared. Pundits who predicted a trade war accompanied by a slowdown in China have been proven wrong.

Then again, the pundits in 2017 were wrong about… well, almost everything.

Forecasting is difficult. But in 2017, most forecasters were dismally off the mark. Donald Trump’s presence in the White House was supposed to tank the markets. A correction was supposed to occur. Tax overhaul was supposed to fail. Wrong, wrong, and wrong.

Political risk has been off the charts since Trump eked out an Electoral College victory. The net result of all that hand-wringing? A massive tax bill that Wall Street loves (and many middle-class taxpayers already hate). If there’s anything you should be wary of in 2018, it’s conventional wisdom.

Health services and technology were the top performing sectors on Tuesday. But the gains in all three major indices were broad-based, contradicting fears of the pessimists that the bull market is showing signs of bad breadth.

It has been a wild and unpredictable year. But as Janus peered backward and forward on Tuesday, he saw that 2017 perhaps set the table for a prosperous 2018. 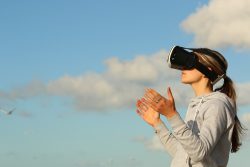 Augmented reality is a view of a physical environment that occurs in real time, enhanced by computer-generated sensory input. These inputs include sound, video and graphics. Augmented reality offers applications for business.

Mixed reality blends these two worlds. In this hybrid environment, synthetic content interacts with the real world. Physical and digital objects co-exist. The sci-fi movie Minority Report features examples of mixed reality that are actually in use today.

Confused about any breakthrough technologies? You have questions; I have answers. Reach me at: mailbag@investingdaily.com