On Wall Street these days, records are made to be broken. The major indices hit fresh highs on Wednesday, with the S&P 500 shattering the 2,700-mark for the first time.

The markets started 2018 with a bang. Stocks soared on Tuesday and the good times kept rolling on Wednesday. Favorable data suggest that the global economy will rack up another year of strong growth. Developed and developing nations are rowing in synch.

On Wednesday, the Institute for Supply Management said its index of national factory activity jumped to 59.7 in December from 58.2 in November. A reading above 50 indicates growth in manufacturing, which accounts for 12% of the U.S. economy.

To be sure, clouds loom. Inflation has been dormant; now it poses a threat. U.S. tax overhaul will kick in during an expansion; the economy could overheat. But little seems to spoil investor enthusiasm.

Wall Street is savoring the $1.5 trillion tax cut approved in December by the GOP-led Congress. It’s the biggest tax overhaul in 30 years. The centerpiece is a reduction in the corporate income tax rate to 21% from 35%.

Middle-class Americans will wave buh-bye to cherished deductions. And the deficit will explode. But the tax windfall will boost corporate earnings. Business spending will surge. With unemployment so low, employers may be forced to raise wages to compete for workers. It’s all food for the bull.

A big winner: Silicon Valley. With lower taxation at home, technology firms will repatriate overseas cash hoards. The money will fuel organic growth. Mergers and acquisitions will pick up. R&D will mushroom. Hence the tech rally.

Across the globe, economic news is good. The U.S. recovery is on track. Europe is booming. China is holding firm. Japan is off the ropes. Latin America is resurgent.

U.S. gross domestic product estimates for the fourth quarter stand at 2.8%. The economy grew at a 3.2% pace in the third quarter.

To be sure, U.S. stocks are overdue for a bear market. The average bull market since World War II has lasted 52 months. The current bull market, which started in April 2009, is almost nine years old. Wall Street’s response to high valuations? A collective shrug.

Wags at the trading desks in lower Manhattan refer to Donald Trump as “President Chaos.” In the Trump era, you should always expect the unexpected.

Stocks are in a bubble. The Federal Reserve might provide the pin. The Fed plans three rate hikes in 2018. Stricter monetary policy could kill the bull. When in December 2015 the Fed raised rates (for the first time since 2006), the markets plunged by 8% over the next month. If the inflation beast rattles its cage in 2018, the Fed’s tightening may get more aggressive.

But for now, why argue with success? Let’s do the numbers. 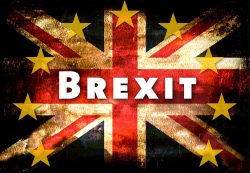 During the darkest days of World War II, Prime Minister Winston Churchill told the British people: “We shall never surrender.”

That’s the attitude European investors are taking toward Brexit, the term for Britain’s vote in June 2016 to leave the European Union (EU). Analysts expect short-term pain but no lasting damage to EU economies.

Certain industries in Britain will bear the brunt. London could lose its status as the financial trading center of Europe. Frankfurt will gain a big slice of London’s banking, cementing Germany’s economic dominance of Europe. New York City also benefits; deregulation enhances its allure. Yet European companies will, as the Brits say, keep calm and carry on.

At first, Brexit talks were rocky. But British and EU leaders expressed comity in December 2017. Downing Street said the “divorce bill” would amount to about £39 billion, a figure both sides can accept. The European Commission president called it a “breakthrough.”

A soft Brexit, where Britain retains some ties to the EU, is becoming more likely. That’s good news for investors everywhere.

Got questions about overseas investing? Drop me a line: mailbag@investingdaily.com