Nine Years Of Bull: Putting The Correction Into Perspective

Before the stock market correction that began two weeks ago, investors had enjoyed nine years of remarkably stable performance. In fact, the bull market that began in March 2009 has only experienced a couple of corrections that amounted to more than 10%.

To put the current correction in perspective, let’s look at the total return of the S&P 500 Index since the beginning of the current bull market: 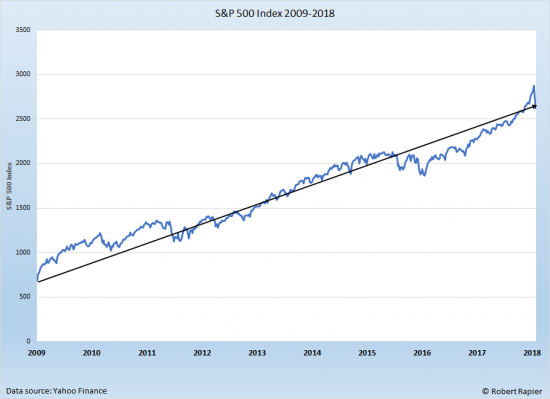 Investors then enjoyed three straight years without a significant correction. That streak ended in the late summer of 2015. During the second half of 2015, the S&P 500 dropped 10%, and it would be nearly a year before it recovered.

President Obama enjoyed a bull market during his entire presidency. President Trump regularly likes to point out the stock market records that have fallen since he took office.

During most of Trump’s first year, the S&P gains continued along the trajectory of Obama’s presidency. But near the end of the year, the market gains accelerated.

This becomes clearer if we look at just the past two years of S&P 500 performance. 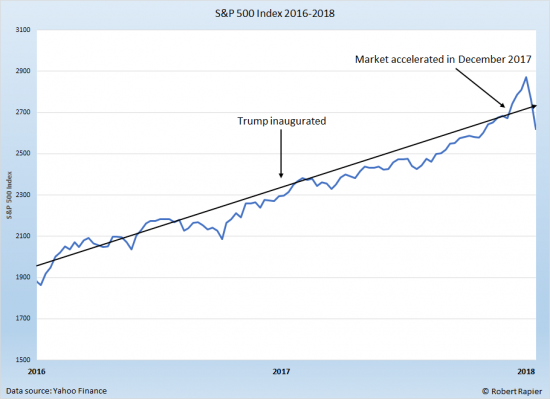 From that graphic, one could argue that the current sell-off is a completely rational correction given the irrational exuberance of the past couple of months. In any case, even with the correction the S&P 500 has generated a total return of 283% since March 2009.

But investors really want to know if this is the beginning of a much deeper correction.

Stick with the Fundamentals

Back in December, with the value of bitcoin closing in on $20,000, a couple of friends asked whether I thought it was a good idea to “invest” in bitcoin. I advised against, for reasons I explain below.

As I wrote in December, I feel — as many do — that bitcoin values represent a speculative bubble that is bound to burst.

The real problem with bitcoin is I don’t know how to evaluate it from a fundamental perspective. As I explained to my friends, I only invest in things that I think I understand. I invest in companies that can be evaluated on the basis of fundamental financial metrics.

For example, companies may be compared on the basis of price-earnings (P/E) ratios, debt-to-earnings, and free cash flow (FCF). But all financial metrics require context. Is a company’s low FCF because the company is in trouble? Or is it investing money back into the company? Perhaps it is in a cyclical industry, and in the midst of a down cycle.

There are fundamental metrics I can understand, based on a company’s financial performance. They are not surefire predictors that a company’s stock will go up (or down, if shorting is your style). But these measures are light-years ahead of fundamental predictors of bitcoin’s value.

So I can’t tell you whether the current bitcoin slump represents a buying opportunity. But I can look at fundamentals for companies and identify numerous attractive buys in the midst of the slump. These buys may not go up next week or next month, but they will serve you well in the long haul.

If the current correction has taken a bigger bite out of your portfolio than you are comfortable with, then it’s time to reevaluate your risk tolerance.

Maybe you are closer to retirement, and this was a reminder that you need to move into less risky investments. It’s not out of the realm of possibility that this correction continues. At some point, we will see another year in which the indices decline by 40%. If you don’t have time to recover from such a decline, then it’s probably time to rebalance your portfolio.

Stick with the fundamentals. Invest according to your risk tolerance. You will sleep better at night, and won’t be as tempted to sell at the bottom of a market correction.