Rise of The Machines: Beware of “Robo-Trading”

John Connor: “You don’t feel any emotion about it one way or another?”

The Terminator: “No. I have to stay functional until my mission is complete. Then it doesn’t matter.”

The dialogue comes from the 2003 movie Terminator 3: Rise of the Machines. But that verbal exchange could have come from the trading desk of any large asset manager. Machine trading has conquered Wall Street.

I want to take a break today from covering the daily gyrations of the markets to focus on two related themes: “passive investing” and robo-advisors. Be on your guard. The trend toward putting investments on auto pilot could pave the way for a crash.

Individual investors who want to profit from the markets but don’t see themselves as stock-picking wizards are opting instead for exchange-traded funds (ETFs) and index funds. These vehicles are managed via software algorithms. Hence the term passive investing.

ETFs that track financial indexes have become a major factor for the recent volatility in stocks. These funds act as accelerants, up or down. They could make the next downturn worse.

During the 2008 global financial meltdown, regulators weren’t prepared for how derivatives and other quant strategies worsened the crisis. The 2010 flash crash occurred as a result of algorithms and automated programs that manipulated the market.

Wall Street seems to have learned nothing. Despite these risks, there’s been a proliferation of passive funds that track indices cheaply and others, called “smart beta” investments, that mimic elements of what humans do at far less cost.

Index funds and ETFs charge annual fees that are only a small fraction of what an actively traded fund charges. The latter need highly paid “talent” to conduct research and conceive strategy.

Since 2000, investors have removed $2.5 trillion from active funds and plowed roughly the same amount into passive ones. About two-fifths of the global industry’s equity assets are managed passively, up from nearly zero in 2000, according to research firm Sanford C. Bernstein.

The popularity of passive funds has concentrated financial clout into the hands of BlackRock (NYSE: BLK) and Vanguard. They’re the two biggest providers of ETFs and index funds. Combined, they hold $10.5 trillion in assets and control 65% of the 1,700 ETFs in existence.

Average investors gnash their teeth during huge market swings. The folks at BlackRock and Vanguard impassively gaze at computer screens. There are no portfolio managers yelling market orders. Software programs are doing the work. No human emotions are involved. Machines are in charge.

This transition on Wall Street from human to machine has been unfolding for many years. The following chart shows the distribution of passive and active ETFs worldwide since 2011. It’s projected that by the end of 2020, 31% of global ETFs will be managed passively. 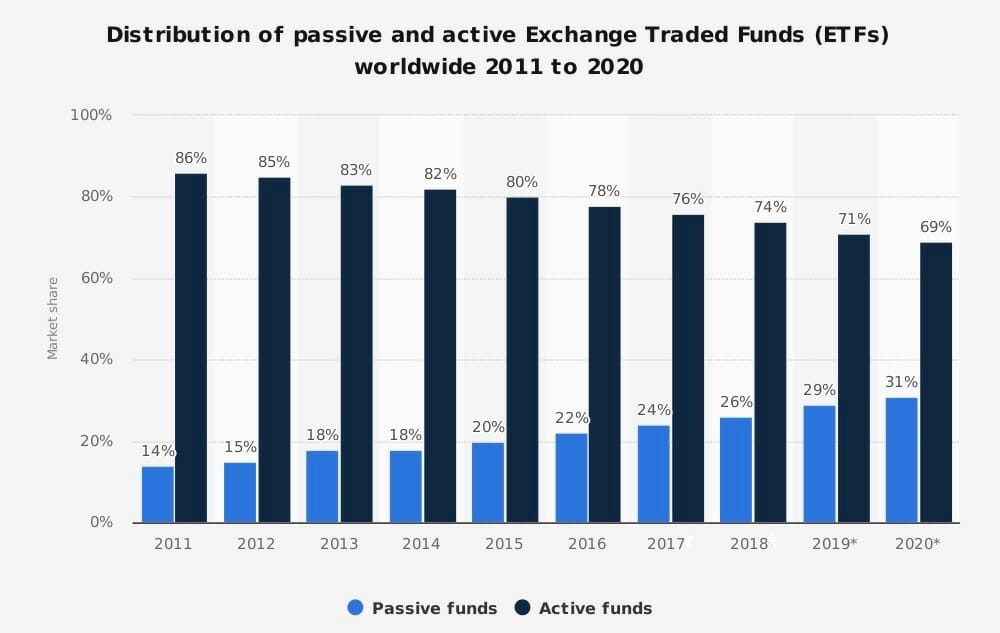 It’s easier to make money with passive funds during a bull market. The true test comes at low tide during a market crash. That’s when investors face a strong temptation to sell, which is usually a mistake. It’s during times of turmoil that the active approach can make a big difference.

In search of balance…

As retail investors continue their march toward passive investing, I remain an advocate of active investing. Don’t get me wrong: pooled investment vehicles, such as mutual funds, ETFs, and closed-end funds, still belong in portfolios. I don’t want to settle, though, for index performance. At Investing Daily, we strive to beat the market. The wisest stance is a combination of passive with active.

To be sure, index funds and ETFs involve less stress. With an index fund or ETF, you’re not tempted to shift your funds from a loser to an ostensible winner. You’re liberated of desperate efforts to buy low and sell high. Emotion is removed from the equation.

The downsides to passive investing? Well, for starters, it’s really boring. But more importantly, your chances of getting rich through the passive approach are just about zilch. And besides, it’s not truly passive. You need to decide which fund is appropriate for your needs and goals; you also need to determine asset allocations.

Also keep in mind, it’s easier to be passive in an up market. This bull market is entering its 11th year and, as they say, a rising tide lifts all boats.

The true test comes at low tide during a market crash, when investors face a strong temptation to sell, which is usually a mistake (and which turns them, ironically, into active managers).

In a closely related trend, we’re seeing the rise of automated investment services called robo-advisors. Introduced a few years ago, these services are being aggressively sold and are quickly grabbing market share. In 2015, they managed only half a percent of invested assets, but by the end of 2020, that number will rise to 5.6%, or more than $2 trillion, according to the consulting firm A.T. Kearney (see chart).

Robo-advisors are computer-based systems that set up asset allocations based on answers to a dozen or so questions about your age, risk tolerance, years to retirement and other basics.

However, robo-advisors lack a personal touch. Their automated systems don’t account for a client’s personality or changing circumstances. Customized advice can add value, especially for complex situations or during bear markets, when a good financial advisor can be a voice of reason.

Corporate earnings growth has dipped into negative territory for several quarters in a row, and yet equity valuations hover at historical highs. In this bifurcated situation, an active approach is about to become more important than ever.

Read This Story: A Tale of Two Markets

My view? If you’re not making your own decisions, you’re burying your head in the sand. There are proactive measures that not only protect your portfolio but also retain a growth trajectory. For example, in this frothy and increasingly risky market, you should rotate toward safe havens, such as stable dividend-payers. (For our dividend map of the best income stocks, click here now.)

As the major stock market indices continue to hit record highs, a correction probably lies ahead this year. In previous columns, I’ve recommended that you re-balance your portfolio by paring back exposure to large-cap momentum stocks in favor of value plays. I’ve also recommended that you elevate cash levels and add inflation hedges.

But you can’t expect this sort of balanced and carefully calibrated approach from robo-trading. During a market downturn, passive investing results in automatic losses.

Many traders follow the lead of the greatest investors, especially Warren Buffett and his Berkshire Hathaway (NYSE: BRK.A, NYSE: BRK.B).

The Key Takeaway: Don’t put your portfolio on automatic pilot. Be sure to perform regular performance reviews of your investments and place performance in the wider context of your long-term policies as well as overall market conditions.

Care to weigh in on the debate between passive and active investing? Send me an email: mailbag@investingdaily.com