One scenario, in particular, got a lot of media attention. That was the company’s forecast for the impact of electric vehicles (EVs) on oil demand: 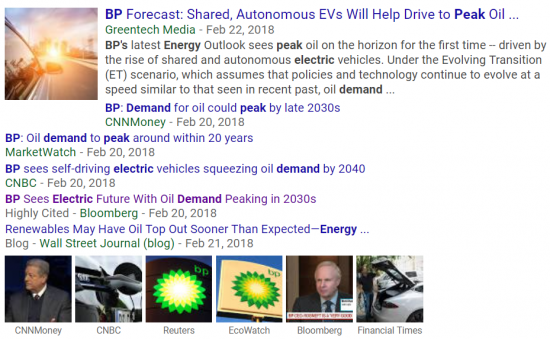 For oil companies, future oil demand is of utmost importance. Remember that when coal demand fell in recent years, investors in coal companies got burned as many coal companies saw their market caps evaporate.

Some analysts have warned that the same thing will happen with oil companies. I would argue that such concerns are one factor helping to weigh down oil prices.

Garbage In, Garbage Out

The timing of peak oil demand is important, but we have to take these forecasts with a grain of salt. For example, two years ago Bloomberg suggested that at a continued annual growth rate of 60%, electric vehicles could displace two million BPD of oil by 2023 — marking the beginning of a permanent decline in oil demand. It was then widely reported in the media that peak oil demand could occur early in the next decade.

But the Bloomberg scenario ignored the sharp upward growth trajectory that oil has experienced for many years. This resulted in the assumption that in 2023 the displacement would take place from 2016 demand levels.

In other words, if 2016 demand was 95 million BPD, the Bloomberg scenario presumed 2023 demand at 93 million BPD and falling. But oil demand is growing at more than a million BPD every year, which would mean the baseline could be 102 million BPD in 2023.

The World Still Needs a Lot of Oil

But here is the bottom line from the latest BP projections. If oil demand doesn’t peak until 2035, the world is going to continue to need a lot of oil in the years ahead. In fact, lost in the headlines about peak oil demand was this comment from BP’s Chief Economist Spencer Dale:

“The suggestion that rapid growth in electric cars will cause oil demand to collapse just isn’t supported by the basic numbers, even with really rapid growth.”

It’s important to “do the math.”

Investors who continue to focus on quality oil companies needn’t fear projections of peak oil demand. Companies that generate positive free cash flow, while funding capital expenditures and dividends should be near the top of your wish list. Over time these companies’ business models may change in response to changing oil demand, but BP reckons that’s still nearly 20 years out on the horizon.