One of My 2018 Energy Sector Predictions was “The U.S. will break its all-time oil production record.” I wrote that I believed it was nearly a sure bet for 2018.

I thought it would happen in the first half of the year, but what nobody knew at the time I made my prediction was that a new monthly record had already happened.

But last week the EIA revised November’s oil production upward, which pushed it into the #1 all-time spot for monthly production. The revision increased U.S. oil production in November to 10.057 million BPD, just edging out the previous record of 10.044 million BPD from November 1970.

I still think it’s a sure bet that tight oil production (more commonly called “shale oil”) will continue to increase this year and that more monthly records will be set. It’s also a pretty good bet that a new annual production record will be set in 2018.

But I have often wondered: Just how much will U.S. tight oil production increase before it peaks and begins to decline?  Another million BPD? Three million BPD?

The first is the EIA’s latest Annual Energy Outlook (with projections to 2050). The AEO models several scenarios for future oil production.

The Reference case projection assumes that known technologies continue to improve along recent trend lines. The economic and demographic trends that were used reflect the current views of leading forecasters.

Here are the projections for all three cases: 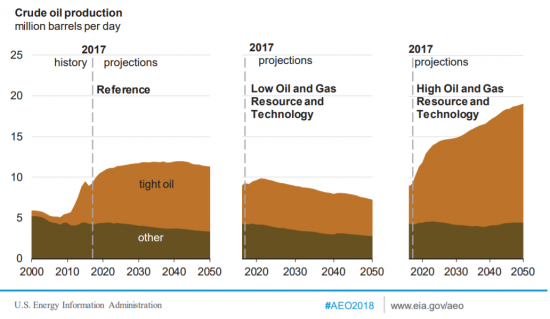 Every case assumes at least a few more years of tight oil supply growth. The Reference case shows shale/tight oil production growth of two to three million BPD over the next three years, before leveling off and remaining at approximately that level until 2050.

The Low Oil Resource case projects tight oil growth of another million barrels per day through about 2022, and then a steady production decline until 2050.

The High Oil Resource case projects sharply higher tight oil growth until about 2025, and then slower growth until 2050. Total production growth, in this case, was almost nine million barrels per day — implying a near doubling of tight oil production between now and 2050.

BP (NYSE: BP) also attempted to answer the questions in its recently-released 2018 Energy Outlook (“the Outlook”). BP forecasts that the U.S. will become “by far the largest producer of liquid fuels.”

BP’s base case scenario assumes much the same conditions as the EIA’s base case. BP’s Evolving Transition (ET) scenario “assumes that government policies, technology and social preferences continue to evolve in a manner and speed seen over the recent past.”

Under this scenario, BP projects that U.S. tight oil grows by around five million BPD, peaking at close to ten million BPD in the early 2030s.

But they state that U.S. tight oil could grow faster or for longer than projected in the ET scenario, depending on the availability of finance and resources. For example, if the rig count doubled by 2025, U.S. tight oil could peak earlier at around 12 million BPD, but would then decline more rapidly if the same total resource is extracted over the Outlook period.

In BP’s ‘greater resource’ scenario, stronger productivity gains increase recoverable resources. In this case, U.S. tight oil could potentially grow to around 15 million BPD and remain at that level for the rest of the Outlook period.

But there’s one item that barely gets a mention in these projections. It is something I witnessed firsthand when I was recently in the Permian Basin. Oil production can expand only as quickly as infrastructure can keep up. And it is struggling to keep up.

It’s not just crude oil pipelines that are an issue. Along with oil comes associated natural gas. In some cases, producers have no outlet for this gas, so they flare it. But there are various legal limits to flaring. I recently heard about a producer who is having to reduce production because they are bumping up against their permitted limits for flaring.

In addition to potential infrastructure constraints, higher oil prices also lead to greater demand for oilfield services providers. That leads to higher costs for the oil producers, but higher profits for drilling and fracking services providers.

It seems likely that U.S. tight oil production will continue to grow for the foreseeable future. That presents both risks and opportunities for investors. There is little doubt that many financially disciplined oil companies and oilfield services companies will profit from this growth.

The risk, of course, is that such strong production growth leaves little room for other producers around the globe to increase production. Thus far, OPEC has maintained discipline in adhering to production cuts that have lowered global crude oil inventories. Should that discipline lapse, oil prices could quickly drop 20-30% from current levels.