Investing legend Charlie Munger, vice chairman of Berkshire Hathaway (NYSE: BRK.A), put it best: “It is remarkable how much long-term advantage people like us have gotten by trying to be consistently not stupid, instead of trying to be very intelligent.”

To be politically correct, I’ve always avoided using the word “stupid” in my column. That changes today.

I’ve seen too many investors make moves with their money that they thought were smart at the time, but which hurt them in the long run. I can’t stand to see people lose money, especially when it’s because of easily avoided mistakes.

Based on my long experience in giving financial advice, I’ve gathered five common blunders. As a public service, I outline them below and explain better courses of action. Investing is hard enough. At the very least, you should sidestep the obvious perils.

My list, of course, is far from comprehensive. But it’s a good start.

If you can afford it, you should delay claiming Social Security benefits. It’s a widely prevalent mistake to start too early.

Every year you put off claiming Social Security translates into an annual hike in benefits of 7% to 8%. Try to withdraw from your 401(k), Individual Retirement Account (IRA), or other savings first before tapping Social Security. It’ll take discipline, but you can better leverage your Social Security payments if you wait.

Retirees who sell taxable assets with substantial unrealized gains will forfeit the advantageous boost in cost basis that their heirs would have received. In such a case, drawing first from a traditional or Roth IRA confers larger tax savings for heirs.

Tapping a traditional IRA rather than a Roth is more desirable when a retiree’s tax bracket is lower than the beneficiary’s. Although the money in an IRA grows tax-free, contributions are taxed as ordinary income for you or your heirs.

The opposite is true for a Roth IRA, which you should tap first if your tax bracket is higher than the beneficiary’s. Savers fund Roths with taxable dollars, which means the money is tax-free for both you and your beneficiary, but that benefit is more valuable for the person in the higher tax bracket.

3) Not Protecting Your Existing Tax Breaks

If you retire before age 59 and a half, you should live on non-retirement plan savings, because early withdrawals from traditional IRAs and 401(k)s incur a 10% penalty in addition to being taxed as income.

When you turn 59 and a half, you should rely on traditional IRAs and 401(k)s in your lower-income years, preferably before Social Security or a pension comes into effect, and withdraw non-taxable savings from a Roth IRA for those years when your income is higher.

Beware of a scenario that often surprises unwitting retirees: hefty withdrawals from a traditional IRA or 401(k) can generate unintended tax liabilities by hiking your taxable income high enough to preclude your eligibility for other tax breaks that you’d ordinarily have coming to you.

For example: a married couple filing jointly with an income of up to $75,300 doesn’t owe tax on qualified dividends and long-term capital gains from investments held in non-retirement savings accounts for more than a year. However, once the couple’s income exceeds $75,300, the tax rate for those earnings rises to 15%.

One of the surest methods to reduce the bite of income taxes on dividend payments is to own dividend-paying stocks in tax-advantaged retirement plans, such as 401(k) plans and IRAs. Dividends paid by investments held in these accounts are not subject to dividend taxes.

I currently suggest the following all-purpose portfolio allocations for readers. Consider these allocations to be guidelines; you may want to tweak the percentages based on how close you are to retirement: 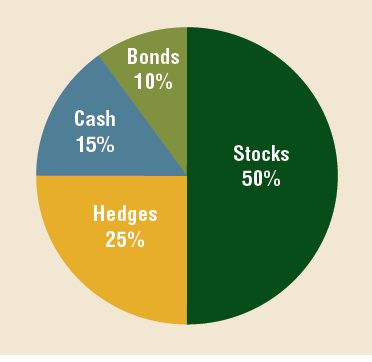 Generally speaking, investors should get more conservative as they get older, mainly because they have fewer working years in front of them. If your portfolio takes a turn for the worse when you’re in your 40s, you still have plenty of time to bounce back.

However, if your investments take a nosedive when you’re 65, you’re in a far worse predicament. That’s why, as you get older, you should increase your portfolio’s bond weighting.

That said, it’s a common mistake to get too conservative. Keep in mind, bond yields fall as interest rates rise. In this rising interest rate environment, a large allocation to bonds may result in significant capital loss.

The destructive effect of rising rates on bonds are even worse if you’re a shareholder in a bond fund. A given bond fund will hold up to several thousand individual bonds. When rates rise, shareholders in a bond fund tend to liquidate their shares to avoid losses, which in turn can prompt the fund manager to prematurely sell bonds to raise sufficient cash to meet redemption requests. This dynamic can clobber the average price of a bond fund, called its net asset value.

You’re better off adding exposure to stocks that do well in a rising rate environment. We’re also starting to see signs of renewed inflation. By taking on some equity risk, you’ll put your assets on a path to not only outpace inflation but also grow in real terms.

5) Ignoring the Cost of Fund Fees

Compare that to another fund that also returns 9% a year, but with an annual fee that’s one percentage point more, or 1.3%. Over 25 years, that first fund will grow to $800,000, whereas the second fund will reach only $621,000. That’s a whopping difference of $179,000, which any intelligent investor recognizes as real money.

Got a question, investing idea or comment? You can find me at: mailbag@investingdaily.com.