2018 First Half Review and Outlook

With the year half over, now’s a good time to assess the big picture in the energy sector. I’ll also take a look at the predictions I made in the beginning of the year and how they’ve fared. This half-year review will make it easier for you to discern the investment opportunities that lie ahead.

It’s been a year of growing U.S. oil and natural gas production, but global demand has eroded spare oil production capacity. Geopolitical issues in Venezuela and Iran are also removing barrels of oil from the market.

Oil producers are enjoying a great year on the back of higher oil prices, but natural gas prices remain stagnant. Cash flow is up sharply from last year for nearly all of the major oil producers. Refiners have done well, but midstream companies continue to suffer from bearish sentiment.

Here’s how I saw the year playing out in my January predictions, followed by a mid-year assessment of the prediction.

1. The U.S. will break its all-time oil production record

I predicted “a new all-time monthly production record, probably in the first half of the year.” That had in fact happened even before I made my prediction, but the data hadn’t yet been released.

In October and November 1970, U.S. monthly crude oil production slightly exceeded 10 million barrels per day (BPD). Production hasn’t been back to that level since then, but after I made my prediction the Energy Information Administration released data showing that November 2017 production reached 10.099 million BPD — a new record. Since then, production has continued to rise, reaching 10.9 million BPD in early July.

Bear in mind that when I made this prediction, the price of West Texas Intermediate (WTI) had just reached $60 per barrel. It traded back down into the $50’s since. There were still plenty of analysts predicting a return to the $40’s when the year began. But by May the price had reached $70/bbl, and has traded as high as $77.41/bbl before recently pulling back.

3. For the first time since 2014, the average Henry Hub spot price for natural gas will be above $3.00/MMBtu

This was a prediction I almost didn’t make. I indicated at the time that my first instinct was “to predict that supply would likely keep up with demand this year and that prices would trade in a range from $2.50 to $3.00.” But a cold snap in late December that pulled natural gas inventories down to the bottom of the average range led me to believe that this would lift natural gas prices. 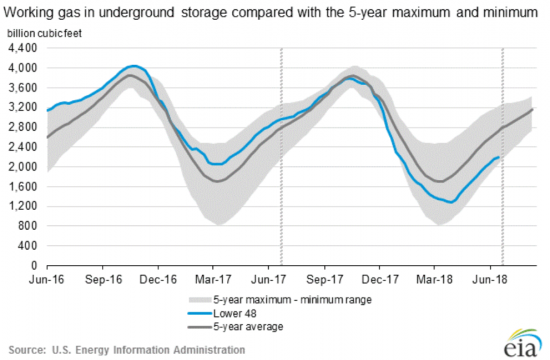 As the graphic above indicates, natural gas inventories remain below normal for this time of year, and that could put upward pressure on prices as we head into heating season. But at least for now, after spiking to nearly $4 per one million British Thermal Units (MMBtu) in January, gas prices have in fact traded mostly in the $2.50-$3.00/MMBtu range.

I made this prediction to emphasize a point. Despite the rapid growth of electric vehicles, the underlying growth in the population and the fact that SUV sales are on the rise will drive gasoline demand higher. The U.S. saw record gasoline demand last summer, and I felt this year was going to be more of the same — despite all the talk of peak oil demand.

5. Shares of Tesla will close the year lower

What a wild ride this has been. EV producer Tesla (NSDQ: TSLA) opened the year at $312, and is presently trading within 1% of that value. However, shares have traded as low as $245 and as high as $370.

I indicated at the time that because Tesla is a cult stock that can swing wildly based on CEO Elon Musk’s promises, this was somewhat of a risky call. When shares plummeted below $300 in March, I thought they would remain there. I still believe the company is grossly overvalued based on the fundamentals, but there’s a compelling story about the future that’s propping up the price.

In conclusion, two predictions for the year have already been fulfilled on the back of a strong U.S. oil sector, one is on track to be fulfilled, one is tracking under my prediction, and one is a coin flip at this point.

The energy niches that have done well so far this year should continue to thrive as the rest of 2018 unfolds. The upward trajectory of oil prices enjoys sustainable momentum.

If you’re looking for profitable opportunities regardless of sector, turn to my colleague Jim Fink. As chief investment strategist of Velocity Trader, Jim has devised a proprietary trading method that makes outsized profits whether the market is moving up, down or sideways. In these increasingly uncertain times, that’s just the sort of investment system you need. Want to know more? Click here for all the details.