Disruption (noun): the act of stopping something from continuing in the normal way.

E-commerce giant Amazon (NSDQ: AMZN) on Friday proved, yet again, that it’s the most potent disruptor in the business world. News broke that Amazon is considering selling its own network switches with embedded connections to its Amazon Web Services and cloud-computing customers.

The Dow Jones Industrial Average, S&P 500 and Nasdaq all finished higher Friday, on optimistic earnings expectations. However, the tech-heavy Nasdaq vacillated between negative and positive territory throughout the session before edging into the green in the final minutes of trading.

The big news was about Amazon, which created turmoil in the technology sector.

Bezos guns for the network leaders… 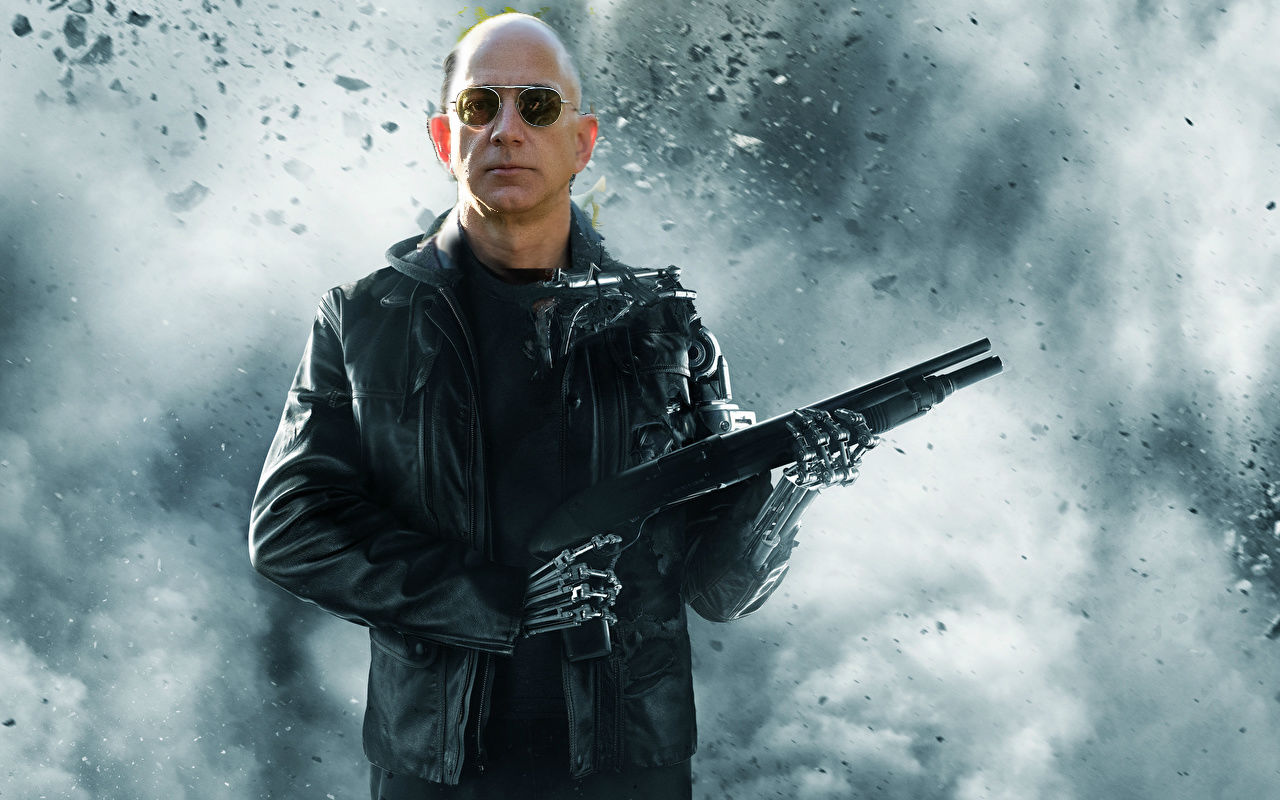 The mere speculation of competition from Amazon is enough to clobber the shares of an industry’s established players. On Friday, the shares of CSCO, JNPR, and CIEN fell 4.13%, 2.28%, and 1.35%, respectively. AMZN rose 0.91%.

The broader markets were buoyed by positive earnings projections. Second-quarter earnings growth for the S&P 500 is expected to reach a healthy average of 20%. The estimated revenue growth rate for Q2 is 8.7%.

Stocks wrapped up a strong week of gains on Friday, for the second consecutive week, after losses over the previous two weeks. Investors suffer cognitive dissonance. They continue to seesaw between pessimism over tariffs and optimism over earnings.

Bank profits are surging but their stocks are not. Investors realize that much of the lift in bank earnings comes from the temporary “sugar high” of the 2017 tax cut, not an improvement in lending.

JPMorgan’s earnings per share (EPS) came in at $2.29 in the quarter, beating the $2.22 estimate. It was the 14th straight quarter that JPMorgan topped analysts’ estimates. JPM shares nonetheless fell Friday by 0.48%.

Citigroup posted EPS of $1.63, beating the $1.56 forecast. However, the bank reported weaker-than-expected quarterly revenue, due to a drop in corporate lending. Revenue came in at $18.46 billion, compared to expectations of $18.51 billion. Citigroup shares dropped 2.26%.

Buffett has been a big fan of the bank but lately, the karmic wheel has turned for Wells Fargo. WFC shares have gotten pummeled this year as the bank’s ethical lapses continually come to light.

The punishment of JPMorgan and Citigroup shares on Friday also shows how exuberant expectations for quarterly operating results can be a double-edged sword.

Woe unto any company that falls short of estimates. The Catch-22 is that, even if a company beats estimates, the stock can still sink. High expectations are setting up a lot of companies for failure, because in the context of excessive valuations, sometimes good just isn’t good enough.

The main indices racked up a solid week, but keeping gains in check were numbers that point to a slow but relentless buildup of inflationary pressures.

The Consumer Price Index (CPI) climbed 0.1% in June, according to the U.S. Labor Department’s latest report on Thursday. The increase in the CPI rose to a 12-month pace of 2.9% from 2.8%, the highest level in more than six years. A year ago the 12-month rate stood at only 1.6% (see chart). 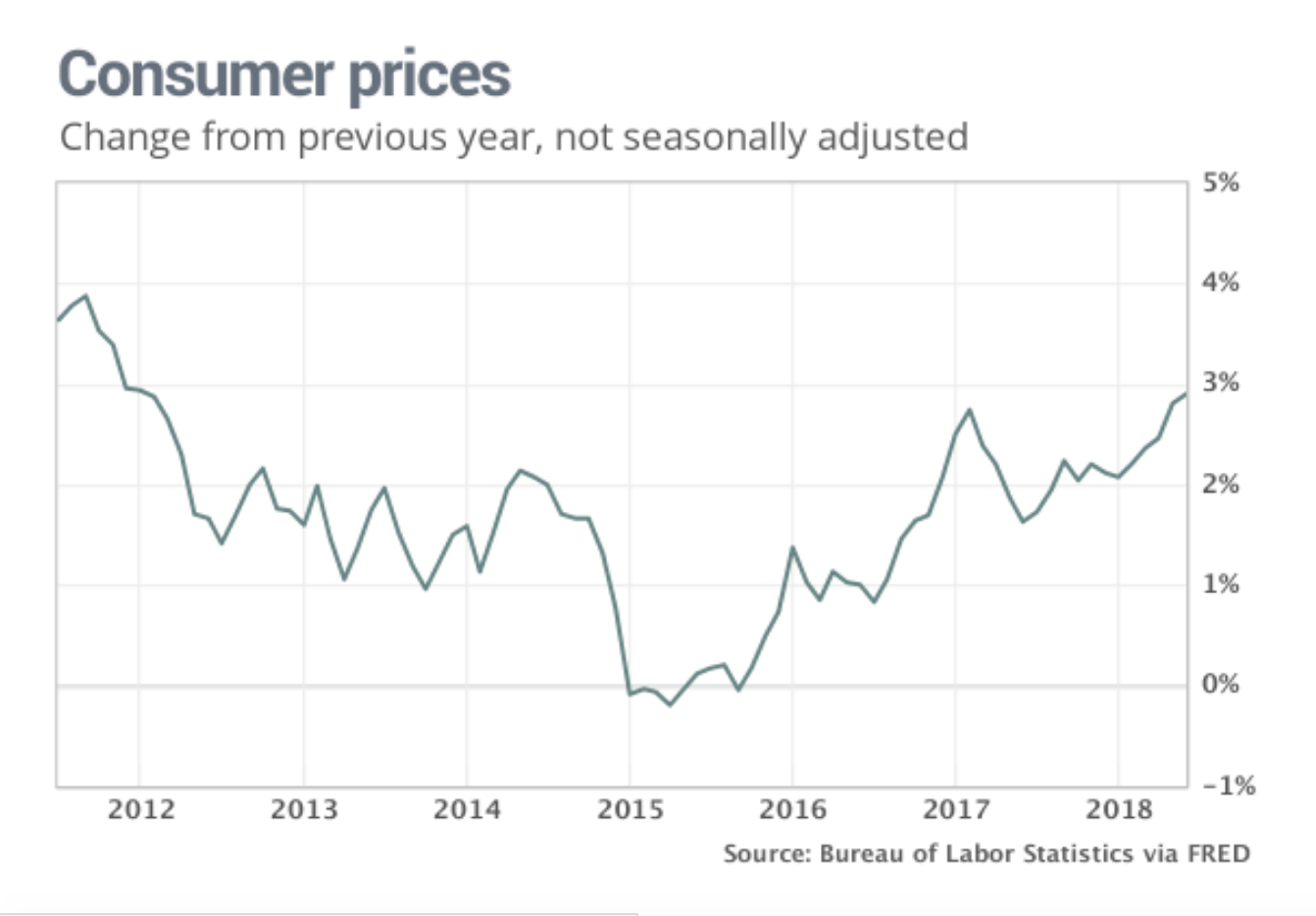 Meanwhile, the University of Michigan reported Friday that consumer sentiment fell in July to a reading of 97.1, below June’s level of 98.2. The decline stemmed from growing anxieties over the global trade war.

Sentiment still remains relatively strong, due to low unemployment and wage growth, but negative views of tariffs are eroding confidence. Confidence wasn’t exactly bolstered when U.S. Treasury Secretary Steven Mnuchin said Friday that trade talks between China and the U.S. had broken down.

Markets have been struggling for traction. In the week ahead, as major blue-chip companies report second-quarter earnings, the rubber will hit the road. 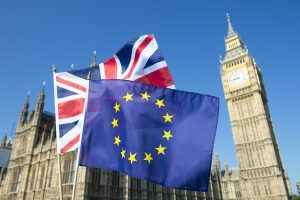 “President Trump is visiting the UK, amid massive protests. He supported Brexit but many Brits now seem to regret it. Can Britain rescind the referendum vote?” — Adrian B.

The “leave” camp continues to learn more about the actual ramifications of Britain’s exit from the European Union, such as its likely adverse effects on the country’s economy. Brexit won’t really stem the tide of immigration, either.

To be sure, an increasing number of Brexiteers are expressing remorse. But to use a term from golf, a “mulligan” (i.e., do-over) isn’t a viable option. The biggest loser will be London, as European banks relocate their headquarters to the Continent.