This year, as the stock market confronts a multitude of risks, corporate earnings have often played the role of “trump card” (pun intended). That happened today, as companies continued to benefit from the Trump administration’s tax cuts and business-friendly policies.

I’ve noticed that on financial television lately, the pessimists get treated as pariahs. (I watch CNBC, so you don’t have to.) As a contrarian, this unalloyed bullishness should give you pause. Investors still face many dangers, the escalating trade war chief among them. But today, strong earnings soothed most anxieties.

That said, stocks coughed up some gains in the late afternoon. The tech-heavy Nasdaq closed in the red, as investors pared back exposure to smaller-cap technology stocks out of concerns that they’re overbought.

After the market closed yesterday, FAANG member Alphabet reported adjusted earnings per share (EPS) of $11.75, compared to consensus expectations of $9.59. Revenue came in at $32.66 billion versus the expected $32.17 billion. GOOGL shares rose 3.89%.

This is a blockbuster week for earnings, with the focus on the large-cap technology stars that have been driving the broader stock market. On the earnings docket are Facebook (NSDQ: FB) and PayPal (NSDQ: PYPL) on Wednesday, and Amazon (NSDQ: AMZN) on Thursday.

All three companies are expected to excel on earnings. Amazon should do particularly well, in the wake of government statistics that show traditional and online sales grew significantly in June.

In surprisingly upbeat news on the trade front, the chief trade negotiator of the incoming Mexican administration asserted today that he expected the renegotiation of the North American Free Trade Agreement (NAFTA) to come to a satisfactory conclusion in the next few months.

When bad news is good news… 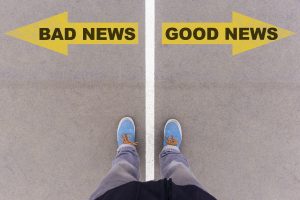 Throughout the Middle East, strife is growing worse. Israel today shot down a Syrian jet fighter over the Golan Heights, agitating hostilities between the two traditional foes.

Tensions also are worsening between Iran and the U.S. As OPEC’s third-largest producer, Iran pumps 3.75 million barrels a day. But Iran has come under pressure, as the Trump administration pushes countries to cut imports of Iranian oil due to the country’s nuclear program.

Yesterday, President Trump posted a provocative tweet that was blistering in its condemnation of Iran, stoking fears of outright conflict.

But all of this bad news has a way of becoming good news. Over the past 12 months, geopolitical woes have caused supply disruptions, which in turn have propelled oil prices higher (see chart below, compiled with data from the U.S. Energy Information Administration). 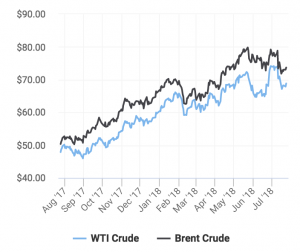 Investors this year have interpreted higher oil prices as a bullish sign of economic vibrancy. As a result, the price of crude and the stock market have tended to move in tandem. We saw that dynamic in play today.

Goldman Sachs (NYSE: GS), which has been bullish on oil for most of 2018, stated last week that it expects Brent crude prices to retest $80/bbl before the year ends, on the strength of growing global demand and interrupted production.

It’s been a blowout earnings season, powerful enough to distract investors from the growing risk of tariffs. For today at least, Wall Street held the right cards to play a winning hand.

“It seems that Brexit talks are collapsing. What’s it all mean for Britain and its economy?” — Larry G.

Most analysts contend that abandoning the European Union would make Britain poorer by undermining the country’s trade with the rest of Europe, in turn reducing the UK’s productivity and incomes. However, Brexit talks became so chaotic this week, speculation is arising that the ruling Tory government will submit the matter to another referendum. A re-vote would be a stunning development that no one expected. Stay tuned.

Questions about geopolitical risk? Drop me a line: mailbag@investingdaily.com