Today was a cliffhanger on Wall Street. After wavering between red and green in choppy trading, stocks suddenly bounced higher in the final minutes of the session.

The Dow struggled to gain traction throughout the day, making it apparent that this global trade war is more than just rhetoric. It’s very real and it’s already taking a bite out of corporate profits. Some of the damage was on display today.

Front and center were Boeing (NYSE: BA) and General Motors (NYSE: GM). Before the opening bell today, both blue chips issued second-quarter operating results that were ostensibly strong. But investors read between the lines and got rattled.

Boeing is the world’s largest airplane maker; General Motors is the world’s third-largest automaker and the biggest in the U.S. Both companies buy most of their steel from U.S. producers, who have raised prices in reaction to tariffs on imported steel imposed by the Trump administration earlier this year.

These higher costs are hitting Boeing’s and GM’s bottom lines.

Boeing beat estimates on both the top and bottom lines. But the company’s commercial airplane division posted revenue of $14.48 billion, which is about $350 million lower than analyst projections.

GM reported EPS of $1.81, exceeding the EPS of $1.78 expected by analysts. Revenue in the quarter came in at $36.76 billion, slightly higher than estimates.

BA and GM cited higher production costs for their tepid full-year outlooks. Other U.S. manufacturing stalwarts are suffering because of tariffs, despite a healthy U.S. economy.

On the economic front today, there were further signs that the crucial housing sector is cooling. The U.S. Commerce Department reported that new home sales decreased 5.3% in June to a seasonally adjusted annual rate of 631,000 units, the lowest since October 2017.

The high cost of tariffs…

During their earnings calls this season, several S&P 500 companies have lamented rising costs due to tariffs.

The following chart shows the projected costs of import tariffs to U.S. metal-intensive manufacturing (compiled with data from Oxford Economics): 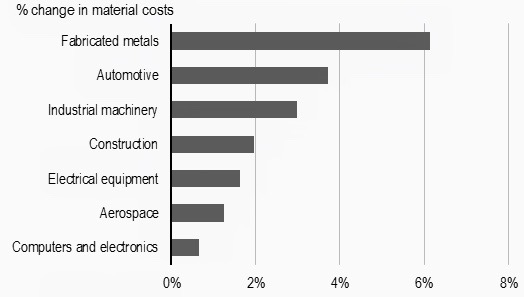 It’s not just China. The U.S. has launched a trade war with just about everyone.

In response to U.S. tariffs on steel and aluminum, the EU has imposed its own import duties on $3.3 billion worth of U.S. goods, focusing on products such as motorcycles, peanuts and whiskey that are produced in electoral districts that voted for Trump in the 2016 election.

The European Commission said that it is drawing up an additional list of $20 billion worth of U.S. goods to hit with duties if Washington imposes tariffs on imported cars.

However, European Commission President Jean-Claude Juncker met President Trump today in the White House for trade talks. Although no deal was announced, the tone was positive in remarks to reporters.

“The headlines have got me spooked. Should I stay invested?” — Kenneth T.

Regardless of uncertainties over trade policy, don’t lose sight of your long-term goals. Look for companies with strong balance sheets, good products, market domination, and high-quality management. Those qualities will see you through.

Got an opinion about the trade war? Let’s hear it: mailbag@investingdaily.com