The Economic News Is Bullish… for Now

Listening to the bloviators on financial television this morning as they parse today’s latest data on the U.S. economy, I’m reminded that economics isn’t a science. It’s a quasi-religion. Numbers are often filtered through a person’s belief system to support their preexisting views.

The bulls use the data to confirm their views, the bears do the same. Republicans and Democrats play a similar game, using the data to support their respective political agendas.

Today, as always, I will strive for objectivity. Unlike the simplistic sound bites you hear on cable news, the truth usually entails ambiguities. Acknowledging the gray areas is bad for TV ratings but beneficial for your investment decisions.

Friday’s report is ostensibly robust, yet beneath the data are bearish portents. 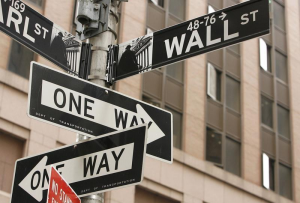 The U.S. Commerce Department released its initial estimate of second-quarter U.S. economic growth today and the news is good — with several caveats.

U.S. gross domestic product (GDP) rose at an annual rate of 4.1% in the second quarter, up from 2.2% in the first three months of the year. That represents the strongest quarter of growth since 2014.

Inflation seemed modest, with consumer prices rising at a 1.8% annual rate. Consumer spending was robust in the quarter, climbing 4%.

Sure, today’s economic numbers are encouraging. But don’t expect the good times to last. The surge in second-quarter growth stemmed from a combination of events that aren’t likely to reoccur. What’s more, they don’t reflect the headwinds we face for the rest of the year and beyond.

As super investor Warren Buffett said: “In the business world, the rear view mirror is always clearer than the windshield.”

The second-quarter rear view is encouraging. But the windshield shows considerable risk ahead.

At first glance, the chart below (compiled with data from the Commerce Department) tells a positive story: 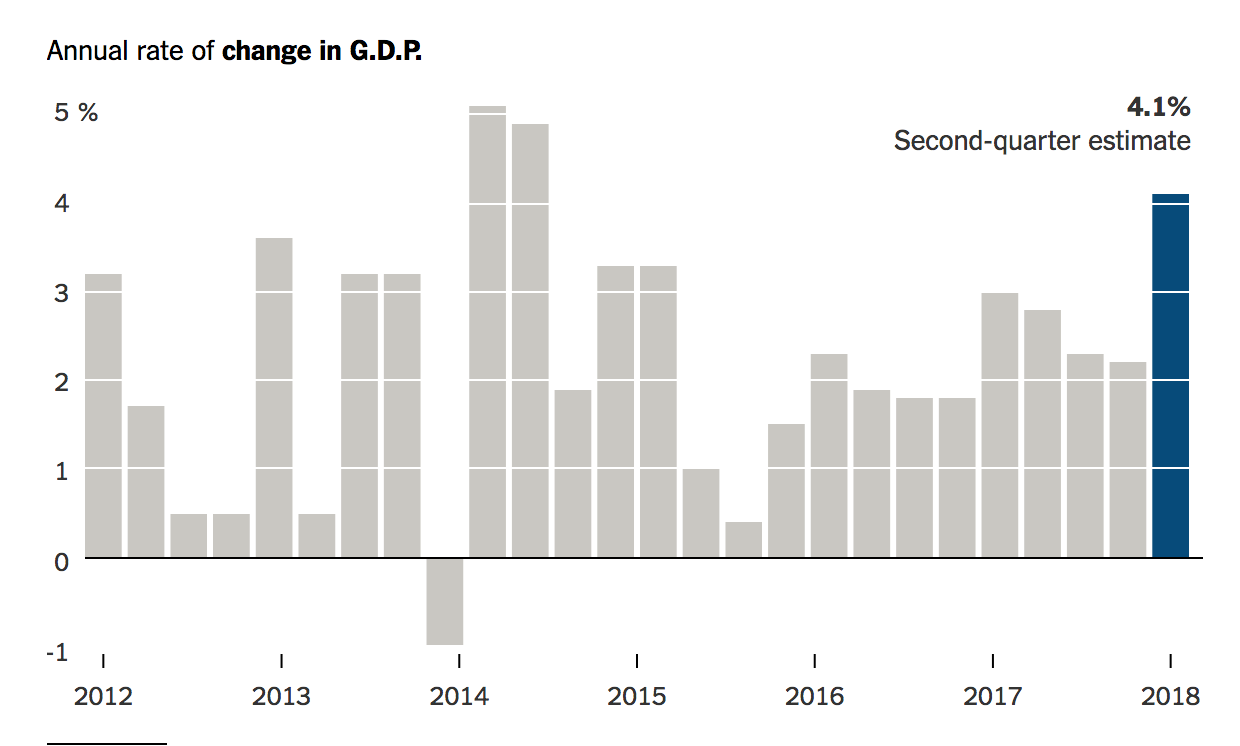 However, most economists expect growth to slow in the second half of 2018. Notably, about 25% of the total growth in the second quarter was fueled by a spike in exports. This export boom resulted from foreign buyers hurriedly stockpiling U.S. products to beat impending tariffs; this catalyst won’t happen again. And as the year wears on, the trade war will take its toll.

Ironically, much of the growth in Q2 was pumped up by the trade war, like a shot of steroids. This doesn’t bode well for future quarters. On the other side of this dynamic is a cliff.

Friday’s robust figures also reflected stimulus from the federal budget that Congress passed last year. Federal spending rose at a 3.5% rate in the second quarter, helping feed a massive budget deficit that will come back to haunt markets in the form of hotter inflation and higher interest rates.

The $1.5 trillion tax cut bill that President Trump signed in December also juiced the second-quarter numbers. Much of the windfall from corporate tax savings, though, is going to stock buybacks and dividend increases, which is great for shareholders over the short term but not so great for sustainable, long-term economic health.

One overtly gloomy aspect of the government’s report on Friday appeared in the housing sector. Residential investment, a gauge that incorporates home construction, slipped for the second time in a row and the fourth time in five quarters.

Separate housing data earlier this week showed that the crucial housing sector is cooling off.

The government reported on July 18 that U.S. homebuilding plummeted to a nine-month low in June. Housing starts last month tumbled 12.3% to a seasonally adjusted annual rate of 1.173 million units. The percent drop was the largest since November 2016. Starts fell in all four regions last month.

In the wake of today’s economic report, the Federal Reserve is unlikely to deviate from its established course. When the Fed meets next week, it’s expected to leave interest rates unchanged. Economic growth was strong in the second quarter, but inflation seemed under control.

Next week’s economic report docket is particularly full. Keep an eye on these scheduled reports, each of which has the ability to move markets:

The market could keep rising in coming months, but high valuations leave a shrinking margin of safety. And the escalating trade war puts this aging bull in jeopardy.

More than ever, you should stick to high-quality stocks that boast inherently sound fundamentals. I don’t advise you to exit the market altogether; you’d be leaving plenty of money on the table.

However, you should pare back your exposure to momentum growth stocks. Facebook’s (NSDQ: FB) spectacular crash yesterday is a case study in why you should be wary of overvalued, mega-cap tech stars.

Benjamin Graham, the father of value investing, said: “Buy not on optimism, but on arithmetic.” Be forewarned, not all of today’s economic numbers add up. In the coming days, you’ll hear a lot of white noise about U.S. second-quarter GDP. Resist crowd psychology and stick to your plan.

Questions about today’s Commerce Department report and what it means for your portfolio? Drop me a line: mailbag@investingdaily.com