Albert Einstein once said: “Technological progress is like an axe in the hands of a pathological criminal.”

I can’t think of a better description of how “disruptive” technology can mercilessly sweep away the old order and generate undreamed-of opportunities. It’s worth remembering this truism, in the context of the technology sector’s comeback today from its extended slump.

In a minute, I’ll get to the most profitable plays in disruptive tech. First, a quick re-cap of how the broader markets fared.

Apple (NSDQ: AAPL) seesawed in volatile trading ahead of its fiscal third-quarter earnings report, which is due after the bell. AAPL shares rose 0.20%.

Investors also were cheered today by reports that the U.S. and China had restarted trade talks, with the goal of de-escalating the tariff conflict. The economic news was reassuring, too.

The Commerce Department reported today that consumer spending rose 0.4% in June, in line with expectations. The government also reported that the personal consumption expenditures (PCE) price index excluding the volatile food and energy components gained 0.1% last month, keeping the year-over-year increase in the so-called core PCE index at 1.9% for a third straight month.

The Federal Reserve’s PCE target is 2%. The Fed concludes two days of meetings tomorrow, at which time it will announce its latest intentions on interest rates. The central bank is expected to leave rates unchanged for now.

The tech sector slump on Thursday, Friday and Monday was triggered by Facebook’s disappointing second-quarter results and outlook, reported after the bell last Wednesday. 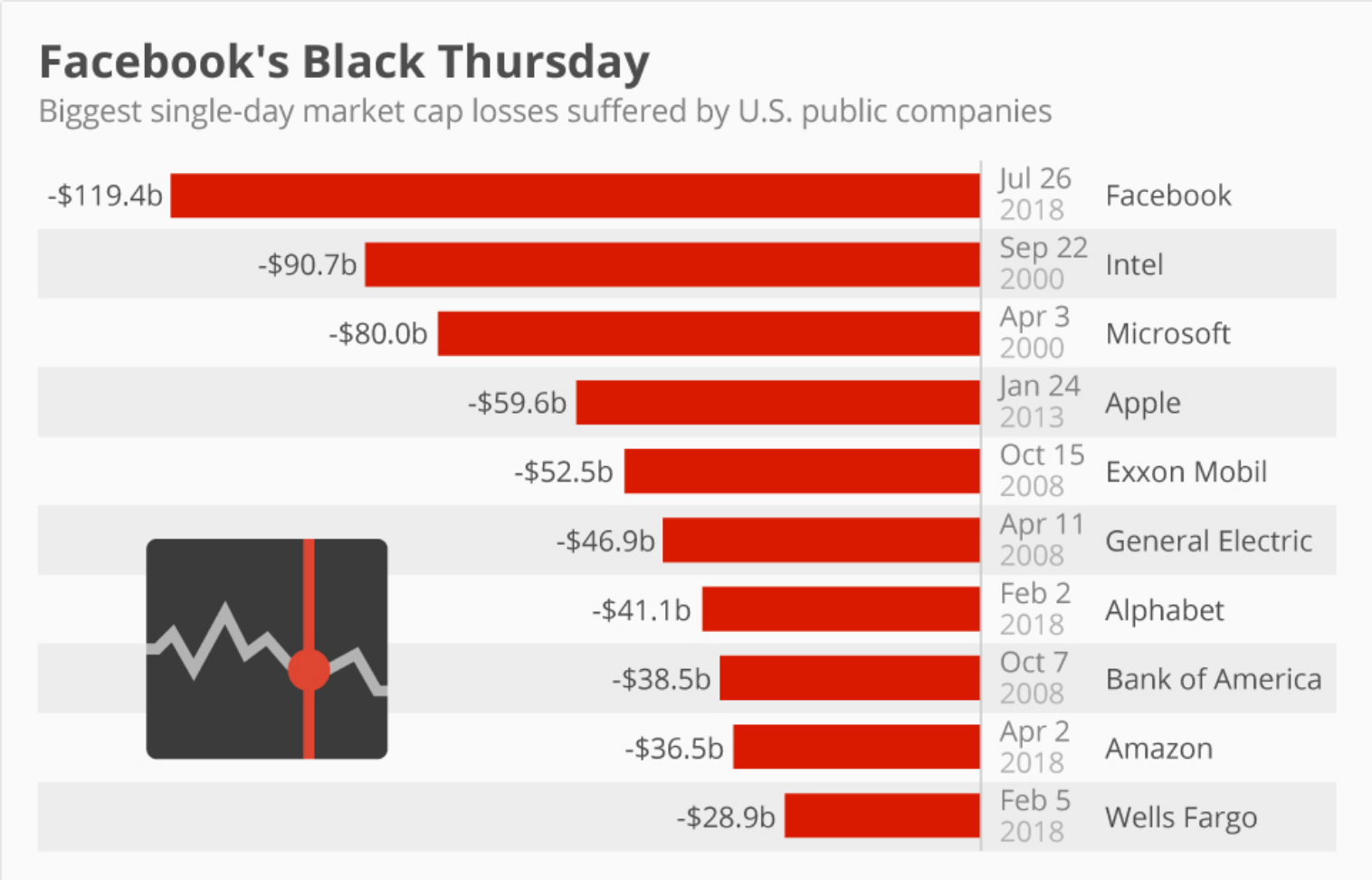 You’ll notice from the chart that six of the 10 stocks that staged historic plunges are technology companies, testimony to the sector’s volatility.

The crash in FB shares last Thursday chopped nearly $120 billion off the company’s market capitalization, dwarfing the $90 billion loss that chipmaker Intel (NSDQ: INTC) endured during the depths of the dot.com collapse in the fall of 2000.

But don’t pity Facebook shareholders too much. Before the massive sell-off on “Black Thursday,” the company’s shares had closed at an all-time high of $217.50, and the current price is still about 15% above the 12-month-low reached in late March. FB shares today rose 0.89%.

The technology sector enjoys many advantages beyond just social media and clever apps that are popular with Millennials.

The tax cut bill of 2017 allows companies with huge cash hoards parked overseas to repatriate that money back to the U.S. at a lower tax rate. Cash-rich technology companies have already indicated that they will devote most of that money to stock repurchase plans.

The global economy has taken hits lately because of the trade war, but it’s still growing (albeit fitfully). Economic expansion gives corporations the wherewithal to make greater investments in IT infrastructure.

But the tailwind of disruptive innovation isn’t dependent on the economic cycle. The cloud, artificial intelligence, electric and autonomous vehicles, pilotless aircraft, virtual/augmented reality (VR/AR), the Internet of Things — all of these technologies represent unstoppable trends that transcend a single corporate quarterly report.

Case in point: United Parcel Service (NYSE: UPS) today announced that it would develop and test an all-electric delivery truck, for deployment later this year.

Amazon’s (NSDQ: AMZN) push into drone delivery also is instructive. The e-commerce leader’s development of pilotless air vehicles to deliver packages has sparked a growth spurt in this aviation niche.

Yet another promising area is VR/AR, which has become mission-critical in engineering, architecture, aerospace and automobile manufacturing, health care delivery, drug development, military training… the list of commercial applications goes on.

You shouldn’t run from the tech sector. Instead, get more selective. The mega-cap growth stocks with high valuations that you see touted on financial television remain risky; Facebook’s recent woes prove that all too well.

If you own one or more “FAANG” stocks, you would be ill-advised to sell out of fear. This five-stock coterie — Facebook, Amazon, Apple, Netflix, and Alphabet’s (NSDQ: GOOGL) Google — still possess inherent strengths that will endure over the long haul. But right now, excessive growth expectations make them vulnerable to pullbacks.

For future tech investments, gravitate toward smaller value plays. The market in the second half of 2018 appears on the cusp of a rotation from momentum to value. Tech stocks still offer outsized growth, but there’s more to the sector that the handful of media darlings.

“Is the self-driving car boom a reality or a lot of hype?” — James L.

Autonomous vehicles represent a very real investment opportunity. Research consultancy IHS Automotive projects that 21 million self-driving cars will be plying the roads worldwide by 2035. IHS also estimates that global autonomous car production will reach 600,000 units by 2025, at which point production will grow at a compound annual growth rate of 43% for the following 10 years.

Questions about investing in disruptive technology? Drop me a line: mailbag@investingdaily.com