The American Way: Get Rich With “Lopsided Bets”

Happy Fourth of July. As you fire-up the barbecue on Saturday and enjoy your favorite libation, it’s time to reflect on a roller-coaster week. As the coronavirus pandemic worsens, economic warning signs abound.

Worried about market volatility? Don’t be.

Just start making “lopsided bets” like the colonists did during the American revolution.

Tomorrow is the day on which we commemorate the adoption of the Declaration of Independence on July 4, 1776, in which the 13 colonies sought freedom from the Kingdom of Great Britain. I was raised and educated in the great city of Boston, so July 4 has special resonance with me (as does Sam Adams beer).

The American colonial patriots defeated the British in the American Revolutionary War (1775–1783), winning independence from Great Britain and establishing the United States of America.

By opposing the mighty British empire, the 13 colonies embraced monumental risk and took a leap into the vast unknown. Against the most fearsome military force on earth, the rebels’ chances of success appeared slim.

And yet, this lopsided bet paid off…in a big way. The U.S. won its independence and went on to become the richest and most powerful nation on earth. 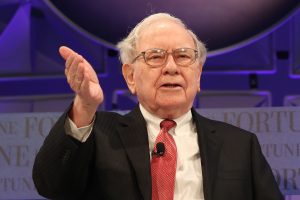 Fast-forward from the 18th century to the 21st. Warren Buffett makes the same sort of lopsided bets. You can use these bets to leverage risk to your advantage.

Buffett once said: “Risk comes from not knowing what you’re doing.”

The financial press loves to quote Buffett, and why not? He’s worth $80 billion, so he must know what he’s doing.

Let’s look at one of Buffett’s key tactics for handling today’s investment climate — a climate that’s fraught with a multitude of risks.

Read This Story: After The Q2 Party, Investors May Face a Hangover

Whether the market is moving up, down, or sideways, this method allows you to double, triple or even quadruple your money, without shouldering undue risk.

Buffett is famous for being a value investor, whereby he pinpoints stocks that trade for less than their intrinsic values.

But he also uses another method that you’ve probably never heard of — “asymmetric investing.”

Many of the world’s smartest investors apply this concept and it’s a major factor in how they got so rich. It’s how a rag-tag Continental Army led by General George Washington beat a vastly superior force of British redcoats. If you want to make serious money, you should understand how it works and leverage it for your own gains.

Buffett’s Berkshire Hathaway (NYSE: BRK.A, BRK.B) is one of the world’s greatest success stories, but it hasn’t racked up returns in a linear fashion. Buffett is 89 years old and he’s seen his share of rallies and crashes, crises and panics, and booms and busts. Through it all, asymmetric investing allows him to balance risk — and spot a “bottom” for superb entry points.

Asymmetric investing is a strategy whereby the outcome of a trade probably has more profit than loss or risk taken. The upside potential may be greater than the downside loss, or the downside is limited but the upside is unlimited.

“Asymmetric” is the absence of symmetry.

As applied to investing, it means the risks versus the rewards are imbalanced. An asymmetric portfolio entails fewer scenarios where the investment has the potential to lose money and, if it does lose money, the amount lost is limited.

This method preserves capital and offers downside protection. There are more scenarios where the investment has the potential to profit, and when it does the profits are significant.

How does this method differ from conventional investing? Like most investors, you probably weigh risks and returns in a way that’s more directly correlated.

It’s a familiar “weighing scale” and it’s fine for investors who are content with making relatively modest gains over the long haul. But it’s no way to become wealthy.

If the American colonists had weighed risks in a linear fashion, they would have remained vassals of the British and world history would have turned out much differently.

Consider the math underlying asymmetric investing. Stocks can only go down 100%, but their upside is unlimited.

Sounds simple, doesn’t it? Problem is, most investors either don’t use the asymmetric method or they’re unaware of it. They tend to invest their money with tunnel vision, concerned only with avoiding risk and trying to bet on “sure things.”

But many of the investment world’s top money managers embrace asymmetric investing. They usually don’t use the term, but it’s how they became billionaires.

Sure, sometimes they make a losing bet, but over time an asymmetric approach will hit pay dirt for outsized gains that trounce the market. You may not get a national holiday named in your honor, but this method can ensure the steady accumulation of wealth.

And here’s the really good news: our investment analysts have unearthed a lopsided bet in the biotechnology sector that’s poised to soar. Want to learn more? Click here for details.

John Persinos is the editorial director of Investing Daily. You can reach him at: mailbag@investingdaily.com. In the meantime, enjoy America’s birthday.