Keep Your Head, When Others Lose Theirs!

I spent the last week in Iceland on a working vacation. I met with innovative energy producers there, an experience that I initially planned as the topic of this column.

But each day I watched the market correction deepen. Consequently, I decided to postpone that column by a week and instead address the market’s volatility.

The risks of a correction had been growing. Rising interest rates and oil prices, as well as the escalating trade war, have all started to seriously dampen investors’ outlooks for the future. When sentiment changes, it can take awhile for it to shift back. Investors flee good and bad companies alike. We never know how long these corrections will last, so the best thing to do is to stick with your plan.

I have been through many market corrections during my investment career. My first major correction was the stock market crash of 1987, when the Dow plunged more than 22% in a single day. It was my first real experience with the “fear” side of the fear and greed factors that drive investors.

Your net worth takes a hit. You might get a margin call. Options may get assigned. Several bad things may hit you at once, driving up your anxiety.

The key to overcoming fear is reason. I am a reasonable person. In 1987, I rationalized that I would be invested in the market for the next 40 years. History was on my side given the long-term performance of the market. The worst thing to do, I reasoned, was to sell in a panic.

Panic buying and selling are the main factors that cut deeply into an investor’s long-term performance. The reason is that we only sell after the market has made a significant downward move, and we buy after it is clearly moving higher – and we fear that we are missing the next big thing. So, we clip our gains on both ends. 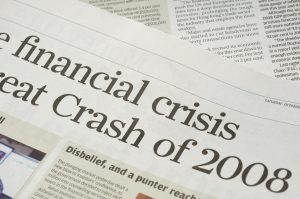 Don’t fall into that trap. I know it’s hard. It was gut-wrenching for me in 2008 to watch my 401k get cut in half. But once again, I knew I had 20 years of stock market returns in front of me, so I held tight and just avoided looking at the market daily.

The result was that by 2010 my 401K had reached the level it was before the crash, and by 2014 it had achieved twice that value. It doubled in value between the beginning of 2008 and 2014, but it saw a steep decline in between.

As an investor, you must mentally prepare yourself for overall market corrections of 20%, or even more. If you are not prepared for such corrections, you need to lighten up on the portion of your portfolio that is invested in stocks.

This becomes especially true as you reach retirement age when you might rely on that money for income. In that case, you may not have the luxury of waiting a few years for a recovery. Don’t let the greed side overrule your fear side. Or, don’t risk what you can’t afford to lose.

But these corrections are also a good time to reassess your overall investment plan. If this market decline causes you undue stress, you can cope by not checking your balances daily. Doing so increases your anxiety and may cause you to make an emotional decision. If you find that you are now losing money that you can’t afford to lose, it’s time to rethink how aggressive you want to be.