Traders often analyze stock charts to try to predict future price movements. This is called technical analysis. To them, the fundamentals of a company, or even what the company does, are irrelevant.

Technical analysts often look for patterns to give themselves a higher probability of making a profitable trade. One popular pattern traders look for is the “head and shoulders.”

This pattern is formed when a stock makes a high, falls back, then makes a new high, corrects again, and then makes a lower high. It is regarded to be a bearish signal that the stock has peaked and will reverse into a downtrend. The pattern can take a long time to form.

An example can be seen in the chart of General Electric (NYSE: GE). The stock makes the first “shoulder” in early April 2016, pulls back, then makes the “head” in July, pulls back again, and finally makes the second “shoulder” at the end of that year. 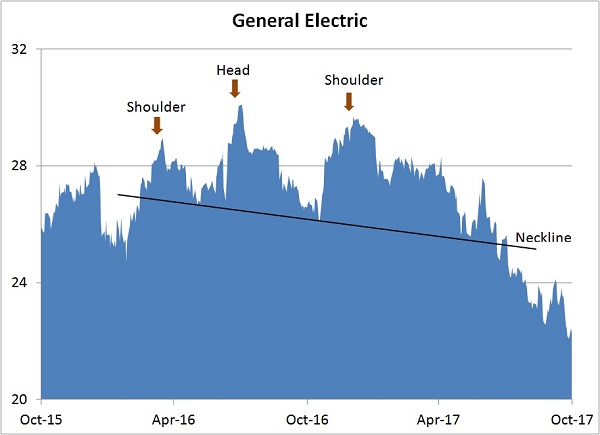 Technical analysts will also draw a line called a “neckline.” It’s a line that connects the two bottoms on each side of the head and forms support.

When the stock price falls through this line, it’s the completion of the head-and-shoulders pattern and from there the price is expected to march lower. It’s not unusual for a stock to bounce back temporarily above the neckline, only to fall through it for good. In GE’s case, this occurred in July 2017.

The stock has gone downhill since.

A reverse head-and-shoulders can also form, which is regarded as a bullish signal that a stock has made a bottom.

Another popular pattern traders look for is “cup and handle.” This pattern is regarded as a continuation of a bullish trend into a breakout. It forms when, after a rally, a stock enters a consolidation period that then turns into a rally to new heights.

The chart of the consolidation period should roughly have a rounded shape, like the letter “U.” This is the “cup” part of the pattern. It can last anywhere from seven weeks to 65 weeks. At the high on the right side of the cup, there should be a minor correction that could last up to four weeks, forming the “handle” before the breakout occurs.

Keep in mind that those lengths can vary depending on who you ask. After all, technical analysis is more of an art than science. 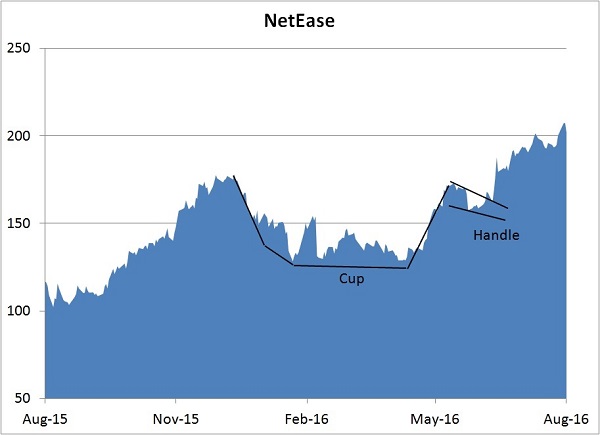 A simplified example of the pattern can be seen in the chart of China-based Internet company NetEase (NSDQ: NTES) between late 2015 and the first half of 2016.

After reaching a high in late 2015, the stock gave back about half of its gain in early 2016. A large part of this was due to the steep decline in all Chinese stocks in general at that time. Otherwise, the retracement for NTES would very likely have been much smaller.

The stock challenged its previous high in May 2016 and underwent a retracement for about two weeks, and then broke out to new highs.

Of course, these are just two examples of patterns that traders look for. Experienced and successful traders are able to see opportunities where the Average Joe may miss them. It also takes skill to know exactly how to trade stocks once you see patterns.

One analyst with an exceptional ability to spot these patterns is my colleague Jim Fink, chief investment strategist of Velocity Trader.

Jim has developed a proprietary trading system that works just as well in bull and bear markets, in good economic times or bad. That means you don’t have to second-guess the movement of the stock market or the economy.

Jim is making a “bet” that his system can deliver 24 triple digit winning trades over the next 12 months. If not, he’ll cut you a check for $1,950. Learn the details by clicking here.