How to Convert Renewable Energy Into Rich Dividends

You have probably heard of REITs (real estate investment trusts) and MLPs (master limited partnerships). REITs and MLPs both provide a low-cost and liquid way for retail investors to own types of assets that they normally wouldn’t be able to easily buy on their own. In the case of REITs, real estate; in the case of MLPs, our nation’s oil and gas transportation and storage infrastructure.

Because of the nature of their business, REITs and MLPs have been around for quite a while as popular choices for income investors.

In recent years a similar type of investment vehicle has emerged. Like REITs and MLPs, they hold portfolios of steady revenue-generating assets that allow them to pay generous cash distributions to investors. The difference is, instead of buildings and pipelines, these assets are renewable energy properties—think solar and wind farms.

This new class is called a “YieldCo.”

Developing renewable-energy projects (wind, solar, hydroelectric, etc.) are time-consuming and risky. As a result, raising capital is difficult and expensive. However, once the projects are completed, they tend to generate stable cash flow and don’t require a lot of maintenance costs. To separate the low-risk operational assets from the riskier assets under development, renewable-energy companies formed YieldCos.

The typical way a yieldco works is as follows: A parent company, usually a renewable-energy developer, forms a public subsidiary (the YieldCo). The parent company then sells (or “drops down”) operational assets, often already with existing long-term power agreements with customers, to the YieldCo. The parent company gets a sum of cash to fund other growth projects while the YieldCo will collect a steady revenue stream, guaranteed by the long-term contracts (see chart). 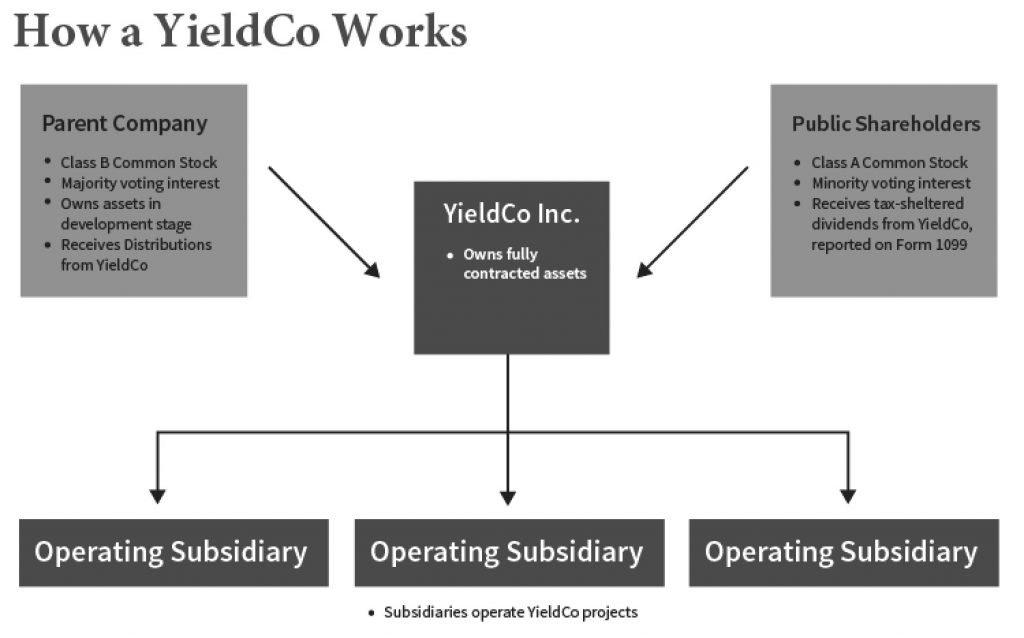 Over time, a YieldCo will grow through acquisition of more renewable-energy assets from the parent company as well as from third parties. YieldCos also enjoy the benefit of large (non-cash) depreciation expenses, which reduce or eliminate taxes.

The years 2013 to 2014 was a heated period for YieldCos as a number of them were created and publicly listed. But then came the oil market crash, and at about the same time the Federal Reserve started to raise interest rates. In addition, Donald Trump, not known to be friendly to clean energy, became president. All these factors lowered the market sentiment on YieldCos and their stock prices fell.

A falling stock price can hurt a YieldCo’s growth. One way YieldCos raise capital is through secondary equity offerings. When the price is high, they don’t need to issue as many shares. But when the price falls, YieldCos would need to issue more shares. This increases the incremental cost of equity—the dividends.

When expectations start to worsen, lenders also demand a higher interest rate so debt also becomes higher and fewer investors may be willing to invest. The situation becomes a vicious cycle, which explains why some YieldCo share prices plummeted.

Bent but Not Broke

However, today, energy prices have stabilized, the U.S. has passed a new tax law, bringing some clarity to the tax code, and interest rates aren’t flying.

Over the past year, a flurry of transactions saw new owners buy out the weaker YieldCos from their parent companies. The industry is ready for another round. Strip away the irrational market euphoria and the pessimism of past years that first drove YieldCo prices up and then down, and you are left with the essence of YieldCos: stable businesses with predictable revenue flow.

There’s another industry where you can find a stream of profits: marijuana. Yes, that’s right. The booming cannabis industry is making investors rich. But you have to be careful. There are a lot of risky marijuana penny stocks out there that are about to go up in smoke.

However, my colleague Jim Pearce, chief investment strategist of Income Millionaire, can give you the full story on a marijuana play with staying power. This company became the ONLY one of its kind operating in the marijuana industry.

He’ll explain why its relationship with Uncle Sam guarantees you’ll have the opportunity to collect up to $55,563 in marijuana profits over the next year. Interested? Click here for the details.