How to Beat Back the Bear

The fourth quarter has gotten off to a volatile start. The concerns are the usual list of suspects: Rising interest rates, higher oil prices, slowing housing starts, slower earnings growth, and rising trade tensions. As I write this, utilities and consumer staples — defensive sectors — are the only two S&P 500 sectors that are in positive territory for the month.

Investors are hoping that this sell-off isn’t the beginning of a 2008-2009 magnitude crash. I don’t think that’s likely, but the risks of a bear market are growing. Bank of America (NYSE: BAC) recently reported that 14 of their 19 bear market signposts have been triggered. They further warned of the possibility of volatility that could persist for the next two years.

So it’s understandable that investors would be nervous. As someone who has lived through many such corrections, let me offer a few pieces of advice.

First, keep in mind that market recoveries ultimately follow market crashes. Unless you need the money soon, or unless you otherwise sell and lock in your losses, you will recover.

But sometimes it could take a year or two to recover. That’s atypical, but this is why you shouldn’t invest beyond your risk tolerance. If you are going to need the money soon, don’t gamble with it. Money that you may need in the next two to three years should be invested conservatively.

For investments with a longer time horizon, you can afford to be more aggressive. That has historically meant greater returns over time, but that also means greater volatility. It means that you will endure market corrections at times, which is what we are currently experiencing. 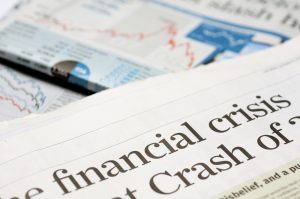 To cope with those market corrections, I find it helpful not to watch the market too closely. It can exacerbate your stress and result in emotional decisions.

During the 2008-2009 crash, I rarely looked at my investments. I was happy with my investment choices and convinced that they would do well over the long haul. They did, and then they soared in the ensuing recovery.

One final piece of advice. I have written previously about the conservative use of options to add a few percentage points to your annual returns. This is done by selling covered call options, or cash-covered puts. But you can also use options to protect big gains in the market.

If you hold shares of a company that you aren’t ready to sell, but you are afraid of a short-term correction, you can always buy puts to protect those shares. In the event of a sharp market drop, your shares will lose value but the value of the puts will soar, helping to buffer the losses.

The bottom line is that you should maintain realistic investment objectives and stick with your plan. Don’t panic. This is a good time to reassess your risk tolerance and make appropriate changes.

That said, outsized growth opportunities still abound, even in this risky market. One such opportunity is the booming marijuana industry. My colleague Jim Pearce, chief investment strategist of Income Millionaire, has pinpointed a company that’s the ONLY one of its kind operating in the marijuana industry.

Jim can explain why this company’s relationship with Uncle Sam guarantees you’ll have the opportunity to collect up to $55,563 in marijuana profits over the next year. For Jim’s presentation click here.