It appears that Jack Ma has bested Jeff Bezos, at least in China.

Amazon announced in April that it would formally shut down the Chinese operations of its vast global e-commerce network. The U.S.-based company invested heavily in Amazon.cn, but the site had trouble adapting to the fickle and often enigmatic tastes of Chinese shoppers.

Amazon won’t completely pull the plug on the world’s second-largest economy; Amazon Web Services (AWS) and Kindle e-books will remain in operation there.

E-commerce is increasingly popular in China. However, Alibaba has been nimbler on its home turf than Seattle-based Amazon.

By leveraging its local supplier networks, Alibaba has enhanced customer service and reaped economic efficiencies. Alibaba also has demonstrated a deeper understanding of Chinese consumers, by tailoring its online offerings and shopping experience to their moods and preferences.

Amazon was only able to capture 0.6% of Chinese business-to-consumer online retail, whereas Alibaba commands the largest share at 61.5%. Bezos knows when to bet big; he also knows when to fold ’em.

Does Amazon’s surrender in China make Alibaba a hot stock to buy now? Or will BABA finally run out of steam after years of torrid growth? Let’s find out.

What's In This Guide

What Is Alibaba Group?

Alibaba’s better-known counterparts in the United States hog the media spotlight, but with a market cap of $485.7 billion, the China-based online commerce company is a widely diversified global juggernaut.

Alibaba is the biggest e-commerce firm in China, with hundreds of millions of consumer and business customers. 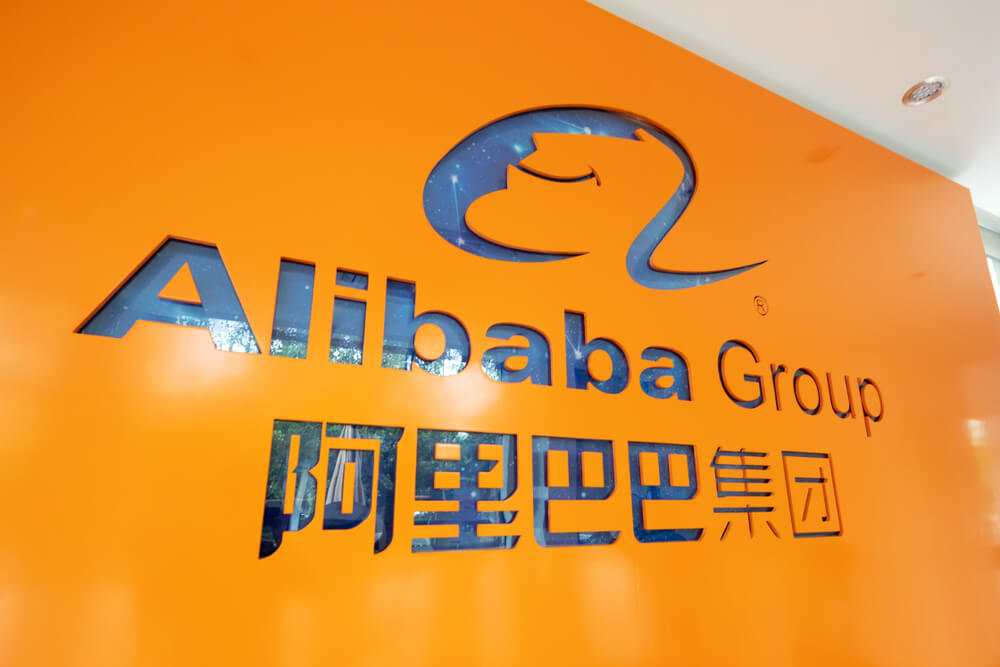 Alibaba was founded in 1998 by entrepreneur Jack Ma.

Ma announced in September 2018 that he will step down in 2019 as chairman of Alibaba. He will leave on the 20th anniversary of his founding of the company, to focus on philanthropy.

The self-made Ma is China’s richest man, sporting a net worth of $44 billion. (Bezos’ net worth is $137 billion, still a hefty amount despite the $36 billion shellacking he took this year in his divorce.)

Although he only stands 5 feet 5 inches tall, Ma is a towering giant in the field of business. This video profile tells the fascinating story about Ma:

How Has Alibaba Group Stock Performed?

What Is the History of Alibaba Group’s Stock?

However, over the past year, the escalating U.S.-China trade war has taken its toll on not just Alibaba but many other China-based firms.

Tariffs already are hurting the bottom lines of companies across a wide swath of industries. As of this writing, trade tensions remain unresolved.

Who Are Alibaba Group’s Rivals?

As brick-and-mortar stores continue to flounder, e-commerce companies such as Alibaba Group are expanding their reach. Let’s look at Alibaba’s main competitors.

China-based Tencent, founded in 1998, is among the largest and most widely used Internet service portals in that country.

Amazon was launched in July 1995 and since then, it has proved itself one of the greatest success stories of all time.

With a market cap of $947.9 billion, Amazon has never been afraid of embracing revolutionary technologies to slash delivery times and undercut the competition. Amazon started by selling books but it’s now the world’s largest online retailer, selling tangible products from A to Z.

Based in the U.S., eBay is a multinational e-commerce platform that facilitates consumer-to-consumer and business-to-consumer sales through its website. The web site has expanded to include “Buy It Now” shopping and online ticket event trading.

The company is undertaking big initiatives to improve its products and services, including a redesign of its platform to bring it more in line with other e-commerce sites, such as those of Alibaba and Amazon.

The above three rivals represent only a snapshot of the competitive pressures that face Alibaba.

Read This Story: Our Walmart Stock Prediction In 2019 (Buy or Sell?) 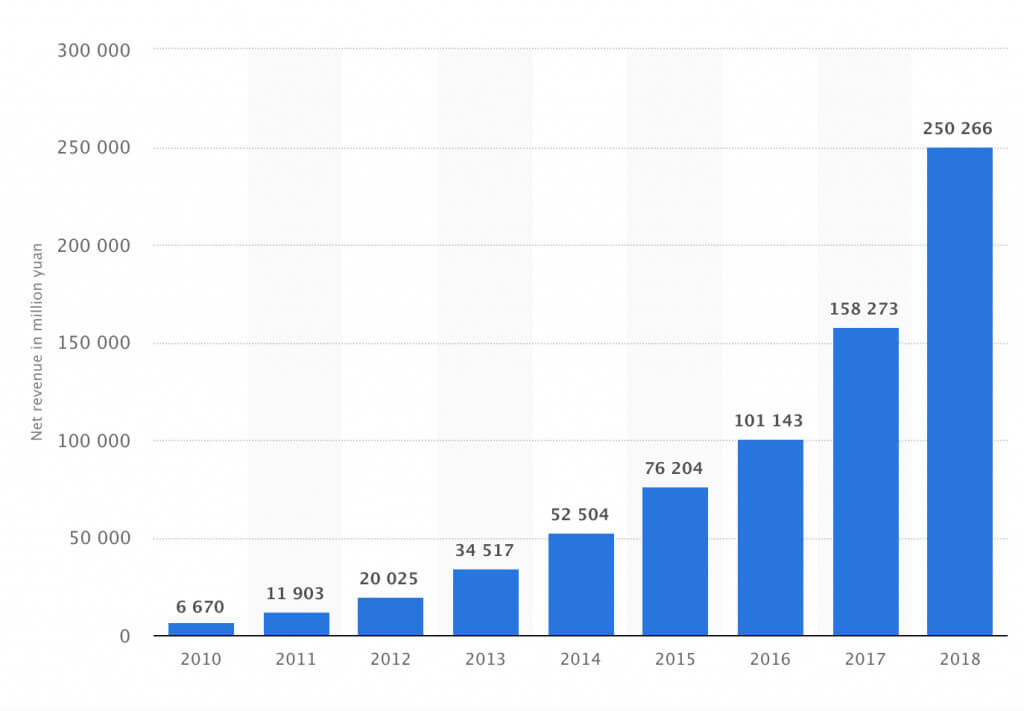 Alibaba should maintain its impressive growth, as shoppers continue to pivot away from conventional retail outlets and toward online platforms. Analysts now expect the company’s revenue to grow 56.1% in fiscal 2019.

Alibaba generates sales from advertising and fees paid by the vendors that set up virtual stores on its platforms. To offset the plateauing of China’s growth, the company has increasingly deployed sophisticated ad tools that target advertisements to specific types of consumers. The company also is expanding its footprint into foreign markets, especially India, by signing up international brands that pay a fee to sell products on its platforms.

It’s worth keeping an eye on China’s “Singles’ Day,” which occurs every November 11. This annual event is a frenzied national shopping holiday similar to America’s “Black Friday.” Largely the brainchild of Alibaba, Singles’ Day celebrates bachelor life and has become the world’s biggest online shopping event. The company typically reaps a sales windfall during the holiday.

As with any stock, there’s a bear case to be made against Alibaba.

Over the past year, a handful of large-cap stocks have accounted for most of the market’s rise. That’s a classic red flag of an imminent downturn

Tech stocks stumbled in the latter half of 2018, but this year they’re regaining overvalued levels. The U.S tax cut bonanza has helped keep them aloft, but the benefits of tax savings are wearing off, especially as countervailing forces such as the trade war gain steam.

Meanwhile, corporate earnings are under pressure. According to estimates from the research firm FactSet, the S&P 500 in the first quarter of 2019 is on track for an earnings decline of 3.9%. These headwinds tend to weigh on global giants in cyclical sectors.

Despite temporary geopolitical uncertainties, Alibaba possesses intrinsic strengths that position it for long-term growth, even if the broader market falters. Amazon’s departure from China provides yet another powerful tailwind.

It’s worth noting that Alibaba is pouring major investments into cloud computing and Netflix-type video streaming, segments that will drive future growth.

At the same time, China’s government is making a multi-billion-dollar push to improve Internet infrastructure, a move that will steer more consumers into Alibaba’s grasp.

The average analyst expectation is that Alibaba will rack up year-over-year earnings growth of 14.7% next year. Alibaba sports a forward price-to-earnings ratio (FPE) of 12, a bargain compared to the S&P 500’s FPE of 17.5 and far lower than those of BABA’s two biggest competitors, Amazon (48.3) and Tencent (26.7).

Tune out the media noise about U.S.-China rivalry and turn on to Alibaba Group’s long-term profit potential. “The House That Jack Ma Built” rests on a sturdy foundation.