Sometimes a beaten-down stock is really a hidden gem, unfairly punished for temporary reasons but poised for an eventual rebound when its long-term inherent strengths eventually shine through.

That’s when the stock is a value play.

Other times, a beaten-down stock isn’t a value play — it’s a fundamentally weak investment that entices deluded optimists but goes on to fall even further.

That’s when the stock is a value trap.

Which brings us to struggling Groupon (NSDQ: GRPN), a Chicago-based, global e-commerce marketplace. At one time a high-flying Wall Street darling, the stock has fallen from grace.

Groupon continually disappoints expectations, but the stock’s adherents refuse to throw in the towel. So which is it? Is Groupon a value play or a value trap?

Let’s get to the bottom of Groupon and consider whether you should buy or shun the stock. 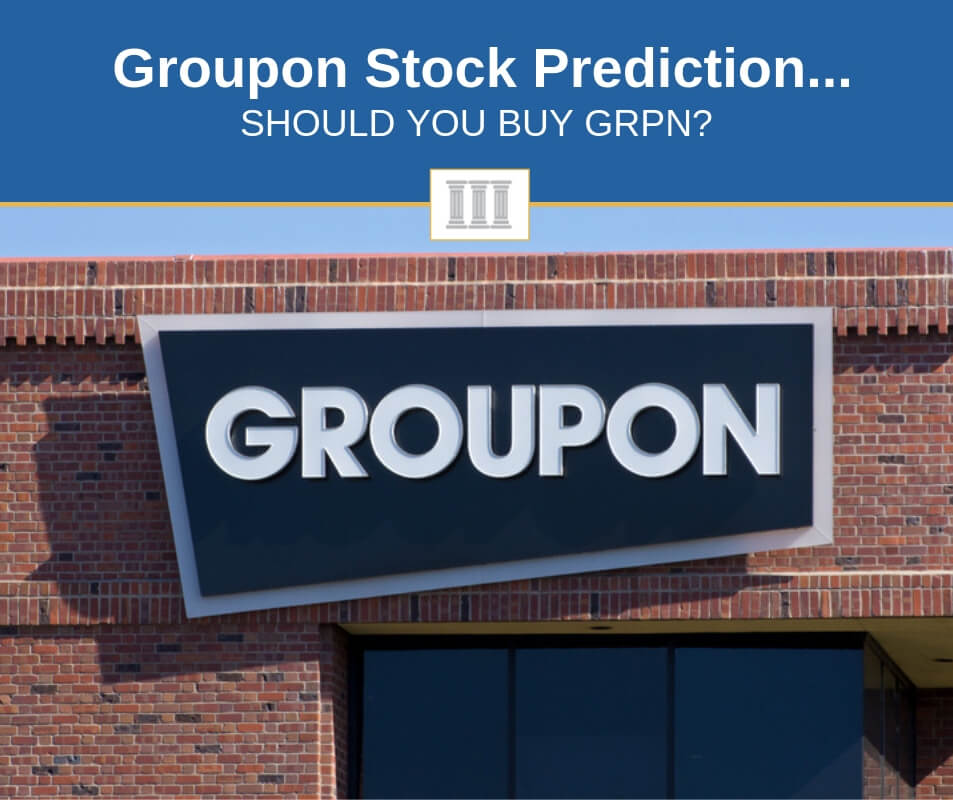 What Is Groupon and What the Heck Happened to It?

Founded in 2008, Groupon connects subscribers with local merchants by offering activities, travel, goods and services. The company provides deals in a wide variety of categories, via search engines, mobile applications and mobile web browsers. The company’s name is designed to connote the notion of a group coupon. 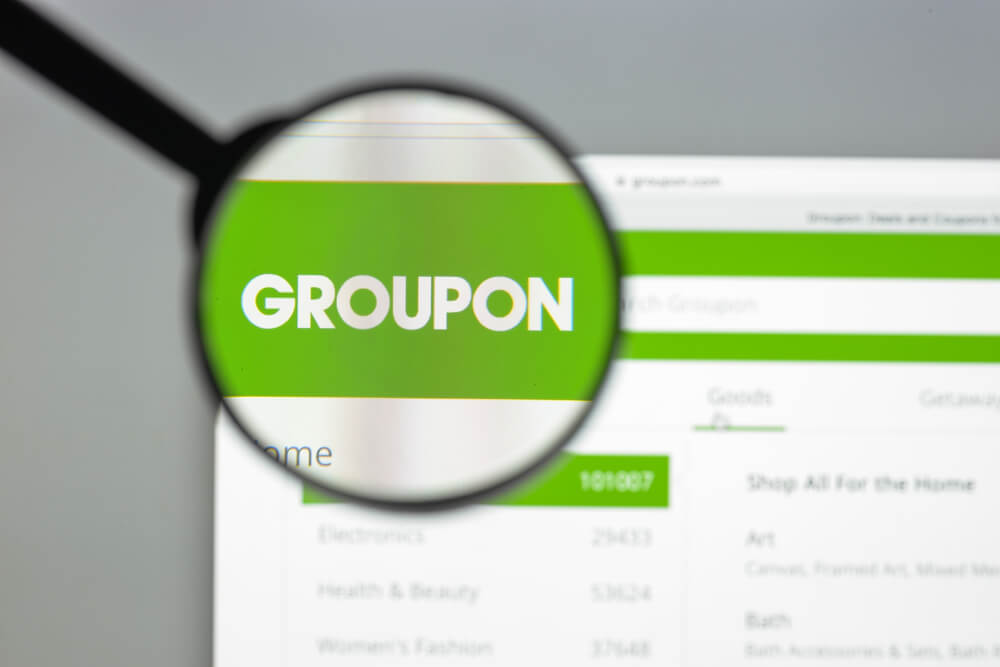 Groupon went public in late 2011 with a market value of more than $12 billion. The initial public offering was widely ballyhooed in the financial media.

What happened? And can the stock execute a turnaround?

How Has Groupon Stock’s Performed?

What Is Groupon’s Stock History?

Groupon’s earnings and revenue growth have consistently disappointed investors, as reflected in the stock’s dismal performance. The company often seems to be on the cusp of a turnaround but it never gets there. Short sellers have reaped a fortune on this star-crossed stock.

Who Are Groupon Rivals?

Groupon’s way of doing business is easily replicated, so it faces fierce competition from a variety of companies, both large and small. Here are the top rivals:

Amazon also has become a major global provider of web-based infrastructure and cloud computing services. The e-commerce giant has made major investments in social-buying platforms that compete with Groupon.

Facebook, the granddaddy of social media, has achieved great success at growing its ad sales to local businesses.

Groupon’s local deals business, which centers on selling vouchers that provide discounted access to goods and services sold by local businesses, is a means of acquiring and retaining customers. But Facebook’s ad products, especially its news feed ads, now serve the same functions for local enterprises.

Walmart is making the adjustment to e-commerce and taking the fight to companies such as Amazon and Groupon.

For the last few years, the bulls have counseled patience with Groupon. They’ve argued that Groupon is a growth story still in its infancy and the company faces enormous potential growth in untapped markets in America and around the world.

In the U.S. alone, there are more than five million small and medium-sized businesses; Groupon has only captured a small number of them, at about 400,000. That leaves a huge pool of potential customers. What’s more, only about 28% of these smaller businesses actually have an online presence.

Groupon’s acquisition in 2016 of competitor LivingSocial, at a discount, was a strategic move that should bolster growth.

With new and seasoned corporate veterans installed in top executive positions, the company is finally getting its managerial act together.

Are the Groupon bulls partaking of the “hopium” pipe? Hopium is a term that I like to use for unrealistic hopes that are pursued like an addictive drug. It’s a habit that clouds your judgment and threatens your portfolio.

The following chart, compiled with data from research firm Statista, shows Groupon’s net income/loss from the first quarter of 2015 to the second quarter of 2018 (in million U.S. dollars): 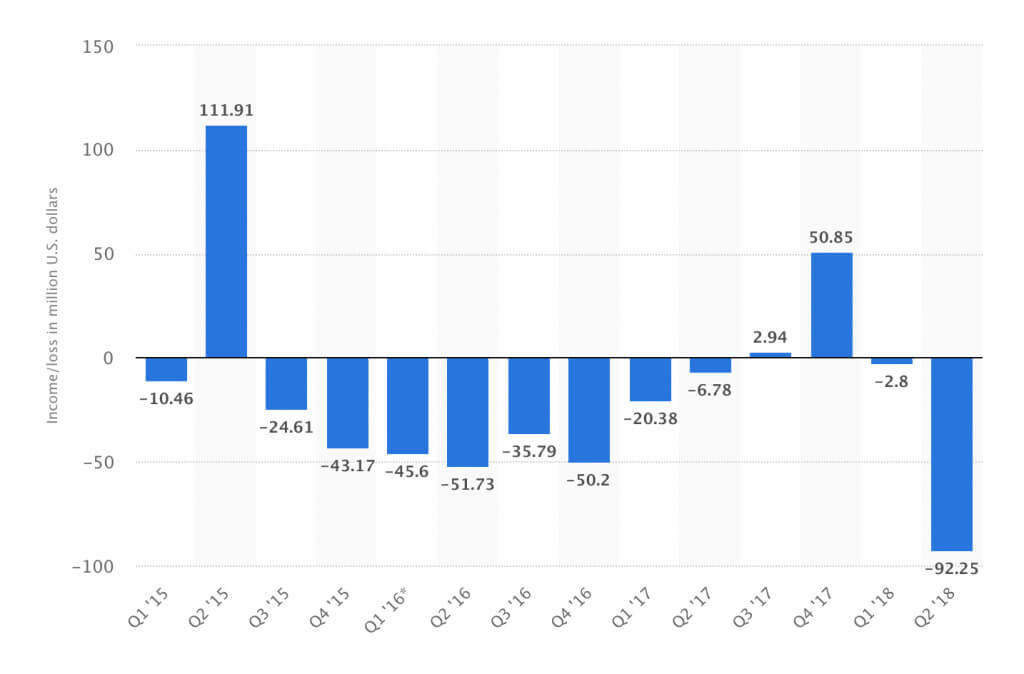 Only seven years after it went public, Groupon in July 2018 put itself on sale. The company and its banks are trying to find a suitor. That’s a tough task.

Making matters worse, Groupon has on several occasions come under SEC scrutiny for allegedly overstating quarterly results. The company has found it difficult to recruit and retain top executive talent; turnover has been high.

Groupon’s business model is simple: pumping out daily emails that offer recipients deals on a wide range of products or services. Problem is, that model is too simple. It’s easily copied. Companies of all sizes are getting into the act, encroaching on Groupon’s turf.

At the same time, Groupon’s business customers increasingly complain about losing money on these deals.

Out of desperation, Groupon is striving to move beyond daily deals. The company recently launched Groupon Goods, an e-commerce site that sells a myriad of products. However, selling products directly to consumers gives Groupon lower profit margins than its daily deals business.

The merger with struggling rival LivingSocial, meanwhile, was akin to shipwrecked survivors clinging to the same piece of driftwood.

Overall Groupon And Prediction For 2019

Groupon will have trouble finding a company willing to buy it. Shares are likely to continue their descent, especially as the broader stock market loses momentum and the high-flying technology sector comes back to earth.

Strong tech companies will over the long haul survive a market correction; weak firms such as Groupon won’t.

Groupon can’t possibly match the scale and resources of Amazon, Facebook, Walmart and other deep-pocketed rivals. GRPN will continue its deterioration in 2019. Outside of maybe finding a buyer, Groupon has little to offer investors.

You should avoid Groupon the way Superman avoids Kryptonite. GRPN isn’t a value play; it’s a toxic stock that will weaken your portfolio.