Our Tencent Stock Prediction In 2019 (Buy or Sell?)

In America, if you asked a random person which company is the King of Tech, the first answers you’d probably get include Amazon (NSDQ: AMZN) and Facebook (NSDQ: FB). In China, though, people would probably say Alibaba (NYSE: BABA) and Tencent (OTC: TCEHY).

Alibaba dominates China’s e-commerce market, while Tencent is the clear top dog in social media and online gaming. The Chinese government’s protectionist policies have helped these two companies, but it doesn’t change the fact that both have been very successful in their own right.

In 2018, both stocks have been clobbered. My colleague John Persinos, managing editor of Investing Daily, already discussed whether Alibaba would be a good buy in 2019. Today, we’ll tackle the same question for Tencent.

Tencent is a huge Chinese tech conglomerate involved in many types of Internet-related services and products. It is best known for its online gaming business and social networking platforms in China.

Tencent was founded in the late 1990s by Pony Ma (no relation to Alibaba founder Jack Ma). The company initially had a bad reputation for many years because its first main product was basically a copycat of AOL’s online messaging platform ICQ. It took a while for the company to seriously grow.

Starting in 2007, to complement its existing online games, Tencent began to license games and invest in gaming companies. This launched the company on the path to becoming the largest online gaming company in China. Its massively popular titles include Honour of Kings and PlayerUnknown’s Battlegrounds.

In 2011, Tencent developed WeChat, now a ubiquitous app in China with more than 1 billion users worldwide. WeChat’s birth coincided with the explosive growth of smartphones. It took Facebook 8 years to reach 1 billion monthly active users (MAU); Tencent did it in 7. 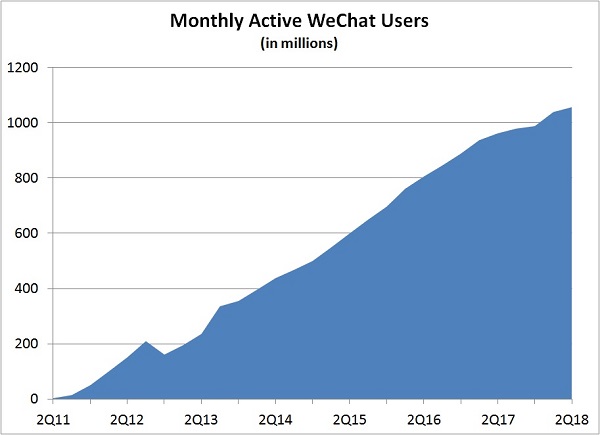 Over the years, as cash flow has dramatically increased, Tencent has invested in some 300 companies around the world in areas ranging from retailers to electric car makers.

How Has Tencent Stock Performed?

What Is Tencent Stock History?

As the five-year stock chart shows, until this year TCEHY had been on a clear uptrend as the proliferation of smartphones in society tremendously boosted the company’s growth. The stock price increase accelerated in 2017. It peaked at about $61 early this year. 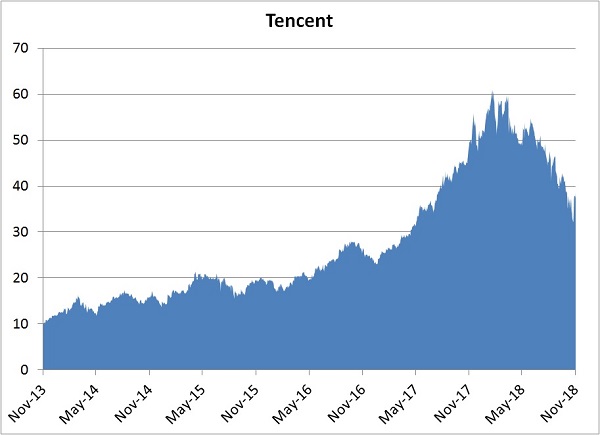 TCEHY is an American Depositary Receipt (ADR). Each share represents one underlying Hong Kong-listed share. The Hong Kong listed share trades on the Hong Kong Stock Exchange under the number 700.

Tencent stock enjoyed a huge run in 2017, rising nearly 115%. Investors were feeling good about China, which helped Tencent post a strong showing. Revenue grew 44.3% during the year, and earnings per share rose by 73.2%. Profit margins also improved to 30.5% from 27.3%, a trend investors love to see.

Market sentiment toward China soured due to signs of possible economic slowdown and the worsening tariff dispute with the U.S. In addition, reshuffling in the Chinese government has indefinitely delayed the approval of new online gaming licenses.

Without government license, Tencent can’t monetize its new games. There’s also rumor that Beijing may increase regulation of the gaming industry for content and to prevent young people from addiction.
However, even with a terrible 2018 so far, TCEHY is still up more than 50% since the end of 2016. Not many mega-cap stocks can make that claim.

Who Are Tencent’s Rivals?

NetEase is Tencent’s main rival in online gaming. With a market cap of $30 billion, NetEase is the smaller company and relies much more on gaming (62% of revenue compared to 34% for Tencent).
NetEase also has felt the squeeze caused by the delay in game licensing approvals. Its stock is down almost 40% from its peak.

The Chinese online gaming market is so vast that there’s room for both companies. The combination of Tencent and NetEase as the dominant #1 and #2 in the market makes it difficult for other, smaller rivals to thrive.

Although these two giants’ core businesses don’t overlap, Alibaba and Tencent are both investing in other companies and diversifying to grow. As a result, they are now fighting on the same turf in areas such as retail, the cloud, and others.

They are each working to create their own ecosystem that could make them an even greater part of Chinese people’s lives. For example, Alibaba’s Alipay and Tencent’s WeChat Pay apps have made major Chinese metropolitan areas essentially cash-free. There are even anecdotes of beggars not accepting cash because they only accept Alipay and WeChat Pay.

As with NetEase, this is not an all-or-nothing competition. There’s room for both to thrive in the huge Chinese market.

Weibo is commonly referred to as the “Twitter of China.” Weibo is a microblogging site. WeChat also enables similar function for its users to post text and photos in their personal feeds called “Moments.” Weibo currently has about 400 million monthly active users (MAUs), fewer than half of WeChat’s count.

WeChat’s popularity is a huge threat to Weibo, which has fought back by securing relationships with celebrities and brands and using live video broadcasts. But WeChat is also experimenting with signing up celebs and brands to create official accounts on WeChat.

Tencent’s price drop in 2018 has definitely been painful for shareholders, but it’s not game over.

Tencent has a proven history of working with the government—otherwise the company could not be as big as it is today—and I expect it will successfully make whatever adjustments necessary to continue to make money in gaming. The company recently announced protections regarding young players to get in Beijing’s good graces.

China is by far the largest online gaming market in the world, with roughly 600 million gamers—and growing. The temporary suspension of new licenses and the fear of strict regulation together have made the situation look highly uncertain. However, license approval is on track to resume in 2019 and any government ruling should provide new clarity as to how gaming companies like Tencent can adjust.

These Mini Programs let users run applications within the WeChat ecosystem to do everything from shop, order food, rent bikes, order car service, and more using WeChat Pay. More than 200 million people use these Mini Programs everyday and the number is quickly climbing. These mini apps can be launched by scanning a quick response (QR) barcode, another step in the blurring of the boundary between online and offline experiences.

It’s still early in the life of these Mini Programs, but they open up endless possibilities for monetization through the WeChat platform.

The headwinds surrounding gaming are legitimate. Game licensing probably won’t resume until sometime in 2019 and it’s possible the Chinese government could decide to seriously tighten online gaming restrictions in light of complaints about gaming addiction and content.

The Chinese government has much greater control over the fortunes of a company than, say, Washington. If Beijing wants to make life difficult for Tencent and other gaming companies, it can.

Competition to seize leadership in tech areas believed to be future high growers also is intense. For example, as they each expand their respective businesses, Tencent and Alibaba are increasingly fighting for the same markets as they vie for Number One.

Competition is healthy for the consumer, but if the competing companies go too far, it could be difficult to achieve consistent profitability growth.

Overall Tencent Forecast and Prediction For 2019

Uncertainty surrounding the gaming business and the tariff dispute will probably carry into 2019. Even though Tencent has minimal exposure to the trade war, it’s still vulnerable to investor skittishness over China. Whether these issues get resolved will play an important role in how quickly Tencent can rebound.

Tencent, a homegrown tech behemoth, also serves as a symbol of China’s tremendous modernization and economic development over the last 20 years. It’s also an important part of China’s stock market. It’s not in Beijing’s interest to see Tencent fail, which makes the stock a long-term opportunity.

An analyst adept at spotting opportunity is my colleague Jim Fink, chief investment strategist of the trading service Options for Income.

Jim’s team recently put together a free tutorial that reveals the track record of Options for Income, takes you inside the publication’s website, and shows a training video — premium features normally only available to paid subscribers. Watch it now by clicking here.