Market Timing Can Be Costly

Although Investing Daily doesn’t endorse any particular brokerages, I don’t mind telling you that I personally use Fidelity. Their stock screener has more utility than most; I also find their weekly newsletters to be informative.

I particularly appreciated one of their recent newsletters, because it provided hard data that support two general investing rules of thumb. The first is, don’t try to time the market. This may not be a rule of thumb for everyone, but it is for me. My philosophy has always been that I am better off riding out the rough patches, because timing the market almost inevitably involves missing major moves.

As long as the market is going up, I am not likely to sell. If I am timing the market, I won’t sell until it’s clear that a significant correction is underway. And if I am waiting to get back in, that will generally happen only after the market is already moving higher.

One of the graphics from the Fidelity Viewpoints newsletter showed the impact of missing major upward moves, which often happen following a market bottom. The example considered $10,000 invested in the S&P 500 from January 1, 1980 through the second quarter of this year. The assumption was that dividends were reinvested, but it didn’t consider the impact of taxes.

But if an investor had only missed out on the best five days during that nearly 40-year period, the return was only $458,476. That would have cost an investor a quarter of a million dollars. Again, this is important because many of those big days take place as the market reverses following major declines.

Keep in mind, this only considers missing the major up moves. If you sold only after a major down move, you might find yourself in the same boat as some investors who can’t figure out why their investments just don’t grow like they think they should.

The second general rule of thumb is that investors should be diligent about investing more conservatively as they grow older. More specifically, don’t take undue risks with money you might soon need. Fidelity included a graphic that showed the impact of your investing style on long-term returns, as well as the best and worst cases: 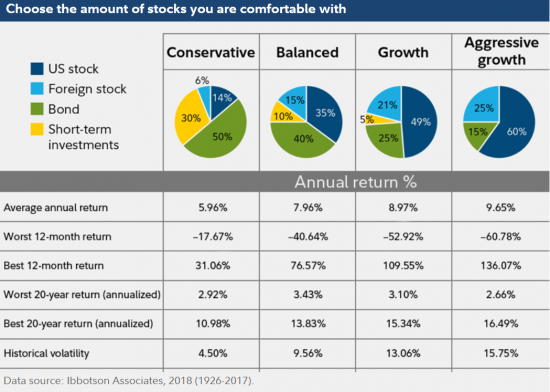 When you are a young investor, you can invest aggressively knowing that the long-term average annual return for this style of investing is nearly 10%. That’s of course not guaranteed, as the table shows that there was a 20-year period where the average annual return was only 2.66%. But if we are playing the long-term odds — and we can avoid the temptation to time the market — we should outperform more conservative investment styles.

But now consider someone near retirement age who may need to live on their nest egg. If they suffered a 60% loss, it could take years to recover from that. For a retiree, this could be ruinous. So, the idea is to get a lot more conservative with your portfolio (again, considering money that you may need within just a few years), and historically you would have sacrificed less than 4% of your annual returns on average in exchange for much lower downside risk.

These are the kinds of visuals that help keep my focus on the big picture. Play the long game and the odds will favor you. But when the game gets shorter, you need to exercise more caution.