Our Rexahn Pharmaceuticals Stock Prediction In 2019 (Buy or Sell?)

I don’t blame you. It’s not on many people’s radar.

It is a tiny biotech company with a market cap hovering around $40 million.

It’s a type of company that’s the epitome of speculative investing.

The stock price has a chance to give multi-fold returns if things go right, but if things go wrong, the stock could go down to almost nothing.

Almost 30 years ago, Chang Ahn, a scientist working for the FDA, lost his sister to stomach cancer. The loss inspired him to seek a cure.

Eventually he founded Rexahn (named after himself) in 2001.

Today, Rexahn is still in the clinical stages with its drugs in development. It has yet to successfully bring any drugs to market, which explains the stock’s poor historical performance.

How Has Rexahn Stock Performed?

As you can see from the chart, the stock has had a few spikes and falls. Briefly RNN was a $50 stock (the prices noted herein are adjusted for a 2017 reverse split). But highlighting the danger of chasing red-hot tiny biotech stocks, the stock fell as quickly as it rose. After a few more ups and downs, the stock is now barely $1 a share. 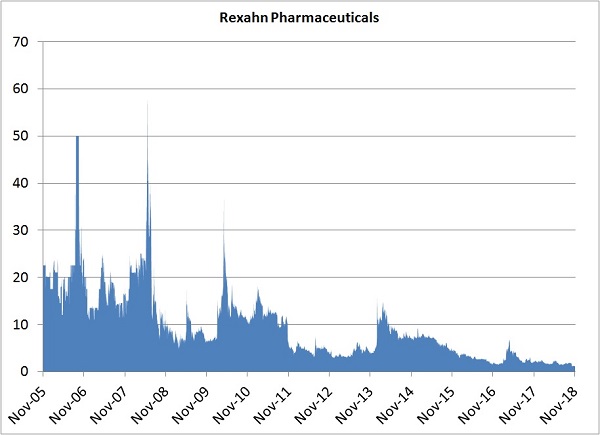 It is very important to remember that small biotech stocks are very risky. They usually don’t have any products on the market yet. Their stock prices depend on market sentiment as to the value of their pipelines and the likelihood of their drug candidates succeeding.

There’s a lot of conjecture involved and a catalyst can change expectations and send the price skyrocketing or plummeting. And sometimes, due to low trading volume, the stock price can jump or fall when someone buys or sells a bunch of shares at once.

In Rexahn’s case, it has simply not been able to bring a drug to market and make money yet. Two serious setbacks this decade include Teva Pharmaceutical Industries (NYSE: TEVA) giving up on a partnership in 2013, and a drug candidate for depression failing in a clinical trial.

On the other hand, the stock has had a dreadful 2018, down about 45% through mid-November. A major negative catalyst was a direct sale of common stock and warrants totaling about 5.77 million shares to institutional investors. Rexahn did it to raise money to keep funding its clinical development programs. 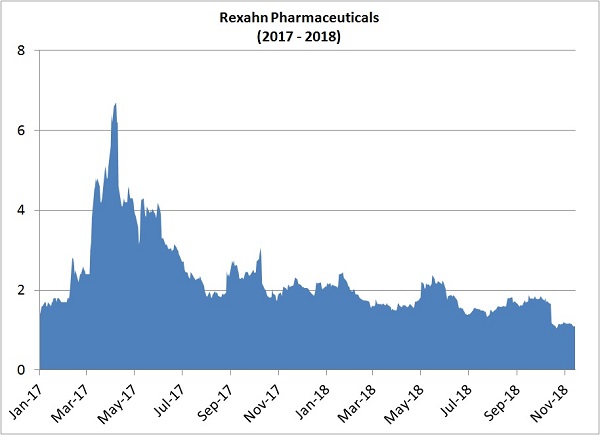 Indeed, running out of cash is a major concern with tiny biotechs that don’t have any products on the market bringing in revenue.

Immunomedics is another biotech company that currently doesn’t have a product on the market. But unlike Rexahn, it’s close to getting FDA approval on one product.

IMMU’s sacituzumab govitecan could be approved by January 2019. The drug treats triple-negative breast cancer (TNBC). This is a type of breast cancer notorious for being aggressive and difficult to treat. Patients usually don’t respond to hormone therapy or another common form of drug treatment. Treatment is limited to surgery, chemotherapy, and radiation.

Although Immunomedics’ drug works differently than Rexahn’s supinoxin, they both target TNBC.

Cyclacel is an even smaller biotech company, with a market cap of $12.5 million.

The company is working on sapacitabine, under testing for lung cancer and leukemia. The drug tries to treat cancer by interfering with DNA synthesis of cancer cells and stopping them from replicating. This works similarly to Rexahn’s RX-3117.

Even though sapacitabine and RX-3117 don’t target the same cancers right now, if both eventually get FDA approval, it’s possible that the drugs could eventually expand their uses and be approved to treat the same kinds of cancers.

Exelexis achieved FDA approval for cabozantinib (sold under the name Carbometyx) to treat advanced renal cell carcinoma, the most common type of kidney cancer. The drug achieved $324 million in net sales in 2017, its first full year on the market.

Cabozantinib was already approved to treat a rare form of cancer, sold under the name Cometriq by Exelexis. Cometriq generated only $25 million in 2017 net sales, so the label expansion was clearly a big deal.

Although cabozantinib doesn’t directly compete with Rexahn’s Archexin, which currently is focused on liver cancer, Rexahn believes its label could expand and end up competing with Archexin.

Wall Street doesn’t think much of Rexahn’s pipeline right now. The clinical data looks good so far but the market isn’t impressed. A positive surprise—for example, if a company backs Rexahn with a cash injection—would likely result in a fast increase in the stock price.

All of Rexahn’s drug candidates target diseases with estimated market sizes of over $1 billion each. Even if just one of the drugs successfully reaches the market, the stock would likely be a multi-bagger.

Rexahn is collaborating with Merck (NYSE: MRK) to test supinoxin to treat TNBC in conjunction with Merck’s Keytruda. Having Merck, one of the largest drug companies in the world, involved in the study is a positive.

It opens up the possibility that Merck could buy out Rexahn in the future if it’s impressed with supinoxin. The two companies could also deepen their partnership further. In exchange for funding, Rexahn could sell Merck an interest in supinoxin.

Rexahn also reached a deal with a private Chinese biotech company to develop Archexin to treat liver cancer. The Chinese company will fund the clinical trial through at least the completion of Phase 2a.

The drug is in preclinical stage now, which is very early. This saves Rexahn valuable money to get through the next leg in the developmental process.

Rexahn expects to report final Phase 2a data for RX-3117 (its third drug) in 2019. If the data is extraordinarily good, that should help the stock price.

Although the stock has the potential to return several times one’s original investment, it is still a very speculative stock. The company has a history of failure. It still hasn’t successfully brought a product to market. None of its drug candidates are even in Phase 3 yet, so we are looking at likely another two or three years at least until the company will have anything on the market.

This doesn’t mean the stock can’t rise well before that, but it’s an indication that there’s still a long way to go.

Even if Rexahn finally wins FDA approval for something, there’s no guarantee that any of its drugs will rack up healthy sales. For example, if sacituzumab govitecan is approved and achieves marketing success, then supinoxin could have a tough time breaking in, even if it gets approved later on.

There’s little buying interest from the market right now. With the finish line not yet in sight, investors worry that the company will have to raise capital again and dilute shareholders. The company is in need of a positive catalyst or two to grab buyer attention again.

Days ago, the CEO for the last six years, Peter Suzdak, resigned, with no reason given. He’s been replaced by the CFO Douglas Swirsky. Whenever there’s an unexpected transition like this, you have to wonder what’s going on.

Overall Rexahn Forecast And Prediction For 2019

The company’s drugs do show promise in the studies so far, but it’s still quite early. They could still fail as testing continues.

Further dilution also is a legitimate risk. The company reported about $12 million in cash equivalents and short-term investments at the end of September, and it raised more cash in the October sale of common shares and warrants.

At the company’s current rate of cash burn, it may be able to go one year without further raising capital. Clearly, the situation is far from ideal.

Tiny biotech stocks like Rexahn aren’t for risk-averse investors. Rexahn is only suitable for investors with a high tolerance for risk, a long-time horizon, and sufficient extra capital to swing for the fences.

Taking everything into consideration, I would sit on the sidelines with this one.

But if you want to get off the bench and into the investment game, turn to my colleague Jim Fink, chief investment strategist of Velocity Trader. By using his breakthrough system called the Velocity Profit Multiplier, Jim is leveraging stock moves as small as 1% into triple-digit gains.