Earn Interest Without Locking up Cash

It’s been a wild last couple of months for the stock market.

For those worried that stocks may tumble further, keeping an extra amount of cash on the side is an option. Your cash position will not fall if the stock market suffers a big decline, and you will have cash to scoop up bargains once the dust clears. 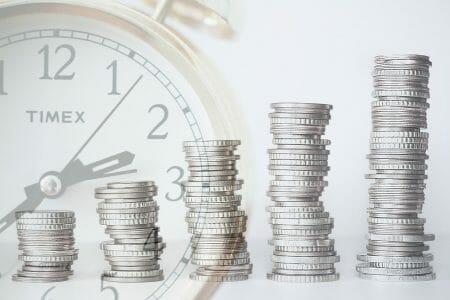 The downside to cash is that it doesn’t earn much interest, so it makes sense to invest the cash in an asset that yields at least something.

One essentially risk-less way to boost return on cash is to buy CDs. However, unless you are willing to pay an early-withdrawal penalty, a CD will lock up your cash until the CD expires.

If you are comfortable with keeping a certain percentage of your portfolio on the sidelines, CDs are a fine choice. But if you plan to buy stocks in the event of a correction or you’ll need cash for another reason, it would make sense to stay more flexible.

One option to consider is money market funds (MMF). These are open-ended mutual funds that invest in highly liquid short-term debt securities such as Treasury bills, commercial paper, CDs, and others. They currently offer yields between 1% to 2% (depending on the type of MMF), comparable to six-month CDs and higher than just sitting in cash.

MMFs are relatively low-risk investments. However, unlike CDs, they are not FDIC insured. You could lose some or all of your investment, though the chance is small.

MMF trades usually settle the next business day. This means that if you need to raise cash to buy a stock, you could sell your MMF and buy the stock the same day, and the MMF trade will settle before your stock trade does. It’s an extra trade you would have to execute, but it’s not terribly bothersome.

Depending on your broker, your cash may actually already be automatically invested into MMFs. That’s not always the case though. Some brokers may automatically deposit your excess cash in a bank, which yields significantly less. But keep in mind that bank deposits are FDIC insured, up to $250,000 per account, and MMFs are not.

If you would like to be in a MMF but your broker doesn’t do it automatically for you, you would have to find the symbol for the MMF you’d like to purchase and execute a trade (as you would trade a mutual fund).

In general, prime MMFs offer the highest yields. They invest in high-quality commercial paper, CDs and other short-term instruments. These types of instruments are perceived to have higher risk than MMFs that invest in government-issued securities.

On the other end of the spectrum are Treasury MMFs. As you may have guessed from the name, these MMFs primarily invest in Treasury bills (T-bills). Since T-bills are backed by Uncle Sam, Treasury MMFs are regarded as essentially risk free. Not surprisingly, their yields are lower than that of prime MMFs. The interest is also exempt from state and local taxes, but not federal taxes.

There are also MMFs that specialize in municipal securities, which are generally exempt from federal taxes, and potentially from state and local income taxes as well. However, tax-free MMFs also tend to have the lowest yields. When choosing between a taxable or a tax-exempt fund, it makes sense to figure out the tax-equivalent yield of the tax-free MMF to see which fund is actually paying the better yield when tax is taken into account.

Like CDs, MMFs aren’t the sexiest investments out there, but for conservative investors seeking a slightly higher yield from their cash while staying liquid, they are a choice to keep in mind.

However, if you’re looking for outsized growth not available from MMFs, turn to my colleague Jim Fink. As the chief investment strategist of Velocity Trader, he knows how to score big gains, but without excessive risk.

Jim is currently making a “bet” that he can deliver 24 triple-digit winning trades over the next 12 months. If you take him up on his bet and he doesn’t deliver, he’ll cough up $1,950. Each time Jim has made this bet in the past, he has delivered! Want to take him up on it? Click here for details.