Our Alphabet Stock Prediction In 2019 (Buy or Sell?)

The “conglomerate” structure was all the rage in the 1960s but fell out of fashion as corporate managers sought leaner, more focused business models.

But don’t tell that to Alphabet (NSDQ: GOOGL). This Silicon Valley super star has brought back the concept. What started with the founding of Google in 1998 has morphed into a sprawling technological colossus, with search engine leader Google as the core business and revenue generator.

Perhaps billionaire investor Warren Buffett put it best, when he stated in a 2014 shareholder letter: “If the conglomerate form is used judiciously, it is an ideal structure for maximizing long-term capital growth.”

But is Alphabet stock still an appealing buy? Or are its best days in the rear view mirror? Let’s delve deeper. 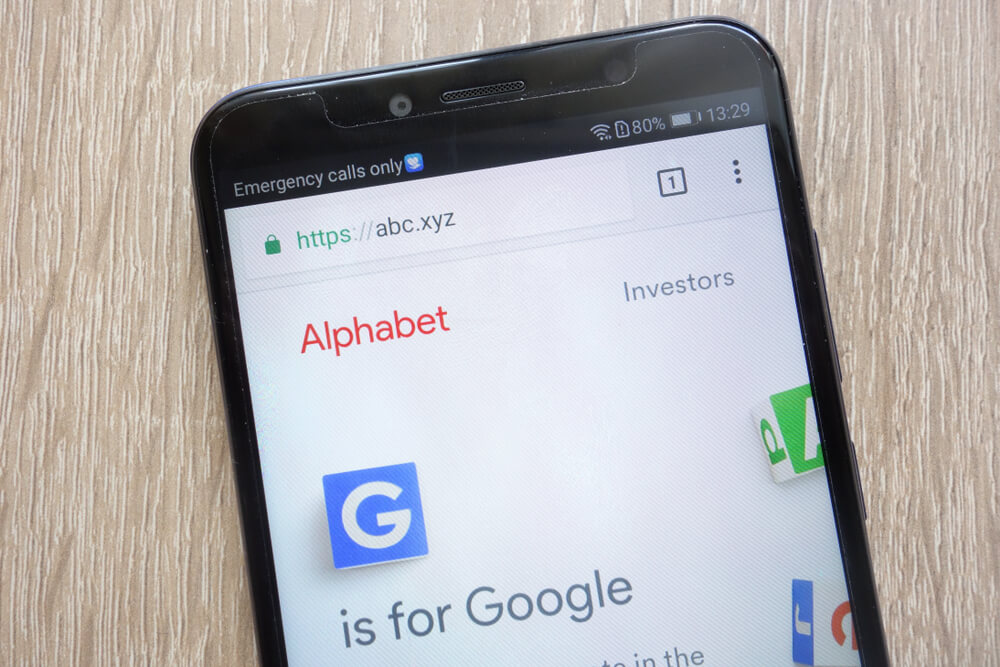 With a market cap of $733.1 billion, Alphabet is a global conglomerate based in Mountain View, California. It was forged through a corporate restructuring of Google in October 2015, and became the parent company of Google and several former Google subsidiaries.

The two founders of Google assumed executive roles in the new company, with Larry Page serving as CEO and Sergey Brin as president. Following the restructuring, Page became CEO of Alphabet and Sundar Pichai became CEO of Google.

Some of the subsidiaries of Alphabet have altered their names since leaving Google and becoming part of the new parent company. Google Ventures became GV, Google Life Sciences became Verily and Google X became just X, a research facility.

Three initiatives, Loon, Wing and Waymo, graduated from Google X to become their own separate divisions. These divisions now provide tangible products and services. Loon is a fleet of high-flying balloons that beam Internet service down to under-served areas; Wing is a fleet of unmanned drones that deliver goods; and Waymo develops autonomous vehicles.

The restructuring was designed to separate Google into a more focused division, while granting more autonomy to other businesses that aren’t engaged in Internet services.

How Has Alphabet Stock Performed?

Who Are Alphabet’s Rivals? 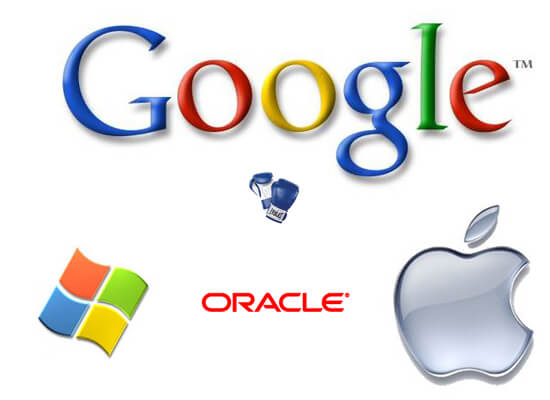 Competition is fierce in the tech sector and Alphabet faces entrenched tech titans that are household names:

With a market cap of $833 billion, Microsoft enjoys a dominant global position in operating system and document processing software. Microsoft’s Windows is the most popular operating system in the world, but Microsoft has shrewdly diversified into several new areas, such as cloud computing, that generate steady and recurring revenue.

Based in Redmond, Washington, Microsoft has resurrected itself from the status of tech “has been” to innovative dynamo. At the same time, Microsoft’s maturing, cash-rich business model enables it to spend less on research and development and more on returning value to shareholders.

Data base provider Oracle (market cap: $184.7 billion) also is reaping the benefits of successful diversification. The hottest competition in Silicon Valley right now is to see who can master the rapidly expanding world of “cloud computing,” an Internet-based resource that provides shared processing and data. Oracle competes with Alphabet and Microsoft in the cloud.

Based in Redwood, California, Oracle makes money from the cloud in two main ways. It sells access directly to applications, but it also provides tools to program and manage apps while analyzing data (its “platform” service).

Apple is a technology bellwether that’s de-emphasizing its declining MacBook business to focus on smartphones, Apple services, and breakthrough technologies such as self-driving cars. Apple competes with Google in the autonomous car space.

Read Also: Where is Apple’s stock predicted to move?

Since then, Apple has joined this elite club, due to its outsized influence and stock performance, elongating the acronym to FAANG.

Over the past five years, the FAANG stocks have beaten the broader stock market by a wide margin. They also provided the impetus for what became the longest bull market in history.

A glance at Alphabet’s phenomenal revenue growth tells the story. The following chart, compiled with data from research firm Statista, depicts revenue of Alphabet from the first quarter 2014 to the third quarter of 2018 (in million U.S. dollars): 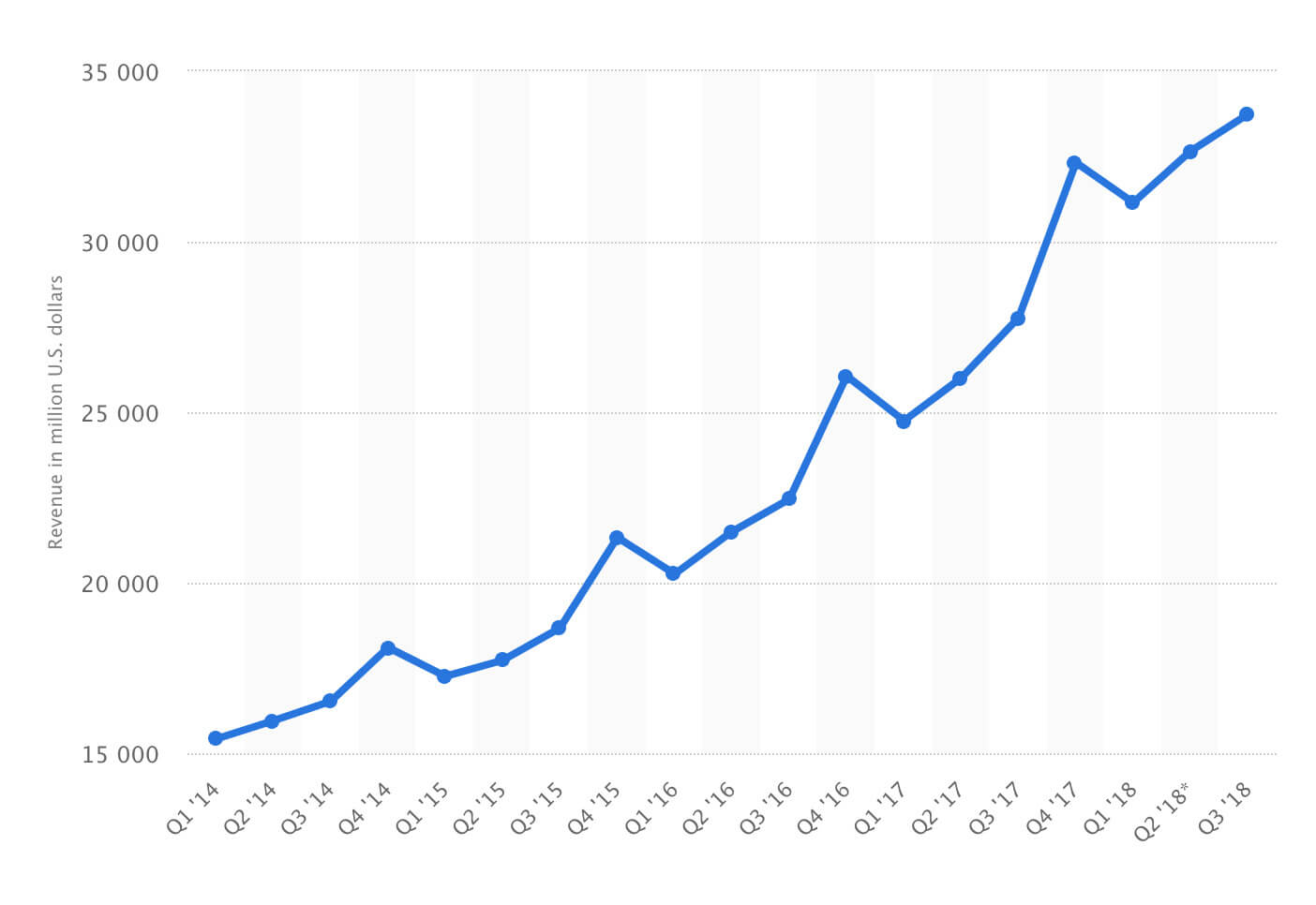 This dynamic started to change in October 2018, as tech stocks slipped amid worries over excessive valuations, escalating trade war, government regulation due to privacy issues, rising interest rates, and a looming recession. When market leaders such as FAANG pull back, the rest of the troops tend to follow.

However, despite recent selloffs in the overall market and tech sector, the broader secular trends propelling FAANG remain in place. History shows that the surest way to make money is to tap into unstoppable trends that will unfold regardless of market gyrations. On that score, Alphabet and Google fit the bill.

Google remains the global leader in mobile/Internet search. Through its YouTube platform, it’s also a major player in the Internet television realm.

The search engine is a tool that has transformed our daily lives. Google was registered as a domain name in 1997 and became available to the public in 1998. Google wasn’t the first search engine but it has grown to become the most used.

The term “Google it” has entered the language as a generic term for conducting an online search. As with all search engines, Google uses a proprietary algorithm to generate search results.

Google is by far the world’s most popular search engine, accounting for about 75% of searches in 2018.

Google’s income mostly comes from its ads business and that’s heavily dependent on personal data collected from its users. Google’s AdWords service places ads on Google’s web page while AdSense and AdMob show ads on collaborating web sites and mobile apps, respectively. The charges applied to advertisers are per click; advertisers pay nothing if nobody clicks their ad.

To determine the order that the ads appear, an auction is performed between advertisers. The ad quality is also taken into account.

Alphabet also is a global leader in the cloud and cybersecurity markets. The company is making huge progress in artificial intelligence, it’s dipping its toes into health care delivery, and it’s becoming a leader in the driverless car space via its Waymo segment. Management refers to Alphabet’s forays into breakthrough technologies as “moon shots.”

What’s more, the company has one of the world’s largest cash hoards ($106.4 billion in the most recent quarter) and rock-solid balance sheet with a AA+ Standard and Poor’s credit rating.

The 2017 U.S. tax bill makes it easier for tech firms to repatriate cash parked overseas. Tech firms will use this cash to fund internal innovation. Historically, a company’s research and development is positively correlated with its stock performance.

Alphabet has consistently posted robust revenue and earnings growth, with Google generating more than 80% of all revenue.

The parent company says its cloud business is generating nearly $1 billion in revenue per quarter, an important trend due to the growing importance of cloud computing. Growth in search and YouTube continues apace.

.Read Also: What’re the best semi-conductor stocks to invest in?

The bear argument against Alphabet largely entails macro-economic and policy trends apart from the company’s fundamentals.

The escalating trade war is exacting a toll on corporations, especially technology firms such as Alphabet with far-flung operations in Asia. The tit-for-tat tariff battle won’t end anytime soon, adding enormous uncertainty to the broader markets and the tech sector.

What’s more, after a long run-up, large-cap technology stocks are vulnerable to a pullback as investors rotate away from excessively valued tech shares toward safer value plays. This sector rotation already is underway and should continue throughout 2019.

Another danger is regulation. Well-publicized privacy breaches and hacking scandals have generated calls for more government oversight, an outcome that’s increasingly likely as the U.S. House of Representatives comes under Democratic control. Stricter regulation would impede profitability for Alphabet and its peers.

Overall Alphabet Forecast And Prediction For 2019

I remain long-term bullish over Alphabet. Despite the breast-beating and platitudes of politicians, lawmakers in Washington are unlikely to slap hand-cuffs on Silicon Valley’s job and wealth creators. Keep in mind, tech firms contribute to political campaigns and hire expensive lobbyists to protect their corporate interests.

To be sure, the trade war is a dark cloud over the global economy, but it won’t last forever. In the meantime, Alphabet is plugged into secular trends that enjoy sustainable, multi-year momentum.

Alphabet’s forward price-to-earnings ratio (FPE) is 23.5, higher than the S&P 500’s FPE of 17 but lower than some of the astronomical FPEs in the tech sector.

So, those are the ABCs of Alphabet… and they spell “buy.” This stock is a long-term holding that belongs in every retirement portfolio.