Last week, I wrote about the recently released U.S. government report on climate change. You may not consider climate change to be a serious threat to your portfolio, but the report predicted severe economic consequences as the world warms. As an investor, you should be aware of the perils and the potential profits.

The Problem With The Status Quo

Most commercially successful efforts to date have focused on adopting lower-carbon energy sources and utilizing energy more efficiently. The dramatic increase in global wind and solar power are examples of success in displacing carbon-based energy sources.

That said, much of the world continues to burn fossil fuels. Developing regions such as the Asia Pacific still rely heavily on coal for power production. This is a key reason emissions in these areas continue to grow rapidly, and now account for two-thirds of the world’s carbon dioxide emissions.

That trend is likely to continue, as fossil fuels offer many of these countries the cheapest sources of power and fuel. This standoff has refocused attention on methods for removing carbon from the atmosphere. Approaches that can remove carbon dioxide from the air and sequester it away (as trees do) remain mostly at an experimental stage. The biggest challenge in such approaches is that even though 400 ppm of carbon dioxide in the atmosphere poses a risk to the climate, it’s not sufficiently concentrated to make capturing it from the air economically appealing in most cases.

The Genius of CCUS

Another approach is beginning to gain momentum. Y Combinator, a startup accelerator that has spawned several successful companies, has shifted its focus to solutions like carbon capture, utilization, and storage (CCUS). These approaches typically involve methods of capturing carbon dioxide from the flue gas of power plants, and either storing it or recycling it into products like fuels, chemicals, or plastics.

Cost-effective methods for scrubbing these emissions and preventing them from entering the atmosphere could substantially slow the rise of atmospheric carbon dioxide. The challenges in CCUS are to find approaches that are economically viable, and that manage to store or otherwise reuse the carbon dioxide in a way that reduces the overall carbon dioxide footprint.

In any case, two of the biggest oil companies are engaged in projects designed to capture and store carbon dioxide. Royal Dutch Shell (NYSE: RDS-B) is executing several CCUS pilot projects, including the world’s largest in Alberta, Canada. This project will capture emissions from one of Shell’s oil sands upgraders, transport that through a 40-mile long pipeline and inject it more than a mile underground.

Chevron (NYSE: CVX) is carrying out a CCUS project at the Gorgon gas fields off the coast of Western Australia. This project will capture carbon dioxide produced with the natural gas and inject into 1.5 miles deep into a sandstone formation. 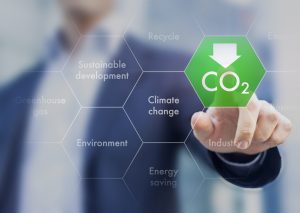 Now consider an approach that converts carbon dioxide into a fuel. The fuel would eventually release carbon dioxide to the air, but the overall carbon footprint is lowered because the fuel can potentially replace a petroleum-based fuel.

I recently reported on a visit to a company in Iceland, called Carbon Recycling International, that utilizes this approach. The company takes carbon dioxide emissions from geothermal power plants and converts that into methanol that is sold into the fuel market. The world’s largest methanol producer, Methanex (NYSE: MEOH), is an investor in this company.

A similar approach is being taken by ClimeWorks, a Swiss company that uses hydrogen and captured carbon dioxide to generate methane that is used to power trucks.

Alternatively, carbon dioxide can be used in greenhouses to make plants grow faster, and if those plants (e.g., wood, bamboo, straw, etc.) are using in construction materials, the carbon can be bound for an extended period.

Pulling Plays From The Air

In last week’s article, I mentioned several ways to insulate your portfolio against climate change. This week, I covered a different approach, albeit one that to date doesn’t have a lot of publicly traded investment opportunities. This will likely be a space that receives lots of investment dollars over the next few years. I will let you know if I see a company that’s deserving of yours.

If you’re looking for a deserving money-making play right now, regardless of industry, turn to the investment prowess of my colleague Jim Fink.

Jim is the chief investment strategist of the premium trading service Velocity Trader, and he’s making his followers a “bet.” He’s promising to deliver 24 triple-digit winning trades over the next 12 months. If not, he’ll fork over $1,950! Jim has made this bet before and he has always delivered. Want to get in on the action? Click here to learn more.