Our Future Farm Technologies Stock Prediction in 2019 (Buy or Sell?)

Whether it’s to make banking easier for “ganja-preneurs,” or to legalize pot on the national level, the legal and regulatory tailwinds in the United States are accelerating for the marijuana sector.

Now that the U.S. House of Representatives is under Democratic control, an increasing number of bills are getting introduced in Congress that favor canna-business. The mainstreaming of Mary Jane represents an unstoppable trend, spawning an investor frenzy.

One cannabis stock in the news is Future Farm Technologies (CSE: FFT, OTC: FFRMF), a micro-cap firm. Below, I examine the company and make a prediction about the stock in 2019.

Future Farm is a picks-and-shovels play on the marijuana boom. Ordinarily, I like ancillary firms that provide infrastructure services for growing industries; they can be highly profitable. However, many of them are penny stocks with low floats, low volume, and next to no revenue. They’re on the radar now largely because the yakking pundits on financial news channels are obsessed with the cannabis sector. Marijuana investing is a sexy topic that boosts ratings.

Future Farm is a penny stock and speculative. Is the stock’s growth potential worth the risk? Or should you run in the opposite direction? Let’s find out.

What Is Future Farm Technologies?

Future Farm deploys controlled environment agriculture systems that are designed to use as little land, water and energy as possible.

Read This Story: Our Cannabis Sativa Stock Prediction in 2019 (Buy or Sell?)

How Has Future Farm Stock Performed?

What Is Future Farm Stock History?

Who Are Future Farm’s Rivals?

To make our FFRMF stock prediction, we must look at Future Farm’s competitors.

This lawn care juggernaut has made major investments in marijuana-based companies and poses significant competition to the smaller fry.

Aerogrow (market cap: $54.9 million) operates in the hydroponics business. AERO’s major advantage: it has the deep-pocketed Scotts Miracle-Gro name behind it.

Aerogrow develops, markets and sells (both retail and wholesale) indoor garden systems. The firm uses proprietary seed kits to grow flowers and vegetables, targeting both experienced and amateur gardeners. The firm supplements its product line by selling support accessories, such as lights.

Hemp (market cap: $18.7 million) focuses on end-user products in industrial processing, such as DrillWall to prevent drilling leaks in oil and gas operations; DrillWill which acts as a lubricating agent to prevent drill parts from sticking; and Spill-Be-Gone for emergency spills of toxic materials.

The company creates these various products by using the versatile organic properties of the hemp plant.

The above companies are only a snapshot of the fiercely competitive players in the marijuana space.

Read This Story: Our Aurora Cannabis Stock Prediction In 2019 (Buy or Sell?)

Make no mistake, Future Farm is a risky penny stock. The trick is to weigh the risks with potential rewards and see if the equation spells “buy.”

Is there any argument to be made on Future Farm’s behalf? Let’s give the stock a fair shot and emphasize the bull case.

Marijuana industry trends are certainly favorable. In the U.S., 10 states and the District of Columbia have full marijuana legalization, and another 23 states permit medicinal uses with permission from a doctor.

The U.S. House Financial Services Committee in March voted to pass legislation that would make it easier for marijuana businesses to access banking services. The bill will be considered by the entire House.

The following chart, compiled by research firm Statista, portrays the enormous projected growth of the marijuana market in America. By 2025, medical and recreational marijuana sales should reach $13.2 billion and $10.8 billion, respectively. 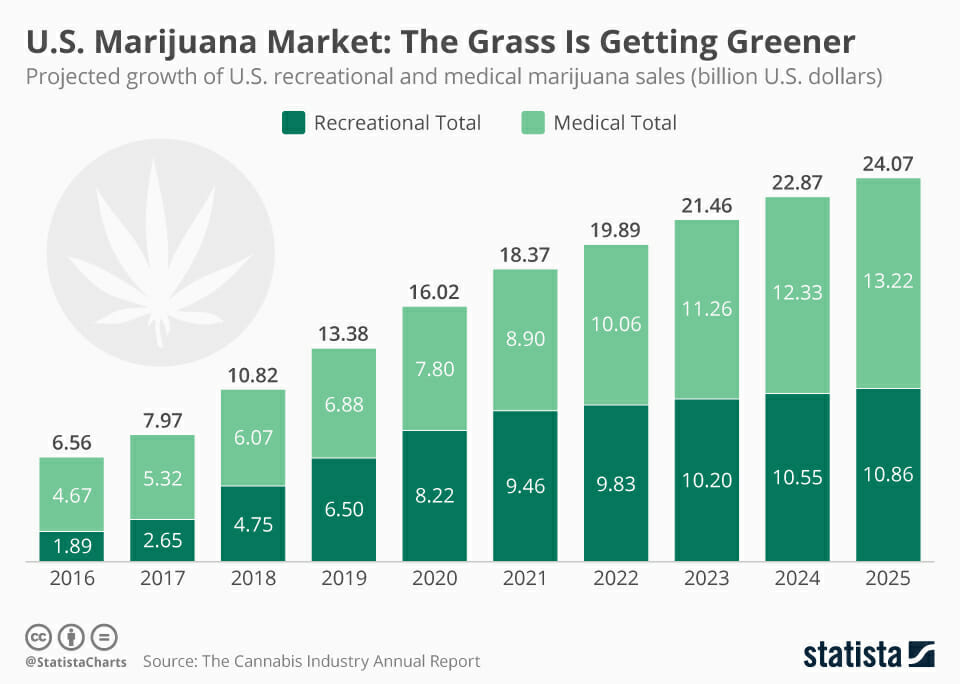 Marijuana is all the rage right now. That means Future Farm’s name is getting out there and revenue is increasing.

Future Farm recently announced that it reached an agreement with its Puerto Rico partner, TCG Investments, LLC, owner of the “Clínica Verde” brand of medical cannabis dispensaries, to expand its ownership interest in its Puerto Rico subsidiary.

Sure, revenue is growing. But Future Farm is losing millions of dollars. The net loss over the past 12 months was $13.7 million. The company has $5.3 million in cash and investments. The numbers point to high risk.

Here’s a video that looks at the potential risks and rewards of investing in marijuana stocks.

Not only is Future Farm a penny stock, but it’s a particularly vulnerable penny stock that is losing money hand over fist.

As if that weren’t reason enough to avoid Future Farm, investors need to understand something else about the company. It doesn’t do anything special. It doesn’t solve a problem.

Lasting businesses solve problems; they distinguish themselves from competitors. They offer something unique and indispensable.

Growing hemp and weed, squeezing oil out of plants — more and more companies do that now. Marijuana is becoming a commoditized sector in which companies with far more capital and resources than Future Farm have the edge.

Never forget one fact: despite its mystique, marijuana is just a plant.

I go out of my way to warn investors about penny stocks just like Future Farm. I know it’s tempting to jump in at only pennies per share, thinking there’s limited risk, but this stock could go to zero.

If you really want to invest in the marijuana sector, there are better places to look. There are cannabis companies that do make money and have capital, as well as a vision and management that can execute.

Future Farm is not one of them. By the end of 2019, many marijuana penny stocks won’t exist as industry-wide consolidation takes hold.

The marijuana industry will soon become a victim of its own success, as fly-by-night enterprises go belly up. Don’t get me wrong: you can still make huge profits in canna-business. But you must stick to quality and shun fundamentally weak companies.

In the pot industry, we’re about to see the classic boom-bust cycle in action, reminiscent of the Dot.com bust of 2000-2002.

Remember back then, when Internet stocks were sizzling hot and money-losing companies were attracting scads of investor money? From 2000 peak to 2002 trough, most Internet stocks declined in value by 75% from their highs, wiping out nearly $1.8 trillion in value. Let that sink in, as you observe the gathering froth among marijuana investments.

Read This Story: Our PotNetwork Holdings Stock Prediction in 2019 (Buy or Sell?)

So what is my Future Farm stock prediction for 2019? It’s entirely likely that shares will go to zero. FFRMF is a dog… with fleas. Keep your distance.