When an industry is subject to massive hype, as we’re seeing with cannabis, shrewd investors turn to the “picks-and-shovels” plays.

Picks-and-shovels is a Wall Street term that refers to the 19th century California gold rush, when the few people who actually got rich weren’t the prospectors themselves — they were the shopkeepers who sold the picks and shovels to the gold-seekers.

A cannabis picks-and-shovels play getting attention these days is Hemp (OTC: HEMP). Based in Las Vegas, this micro-cap company uses the sturdy fibers of the hemp plant to create industrial products, especially for the oil and gas industry.

The firm touts its hemp-based products as green, eco-friendly alternatives to similar products made from toxic materials. Sounds warm and fuzzy, but HEMP is a penny stock. Maybe the company’s products aren’t toxic, but penny stocks often are.

Is Hemp worth considering? Below, I take a look at the company’s prospects in 2019 and whether you should buy or shun the stock.

Hemp focuses on end-user products in industrial processing, such as DrillWall to prevent drilling leaks in oil and gas operations; DrillWill which acts as a lubricating agent to prevent drill parts from sticking; and Spill-Be-Gone for emergency spills of toxic materials.

The company creates these various products by using the versatile organic properties of the hemp plant.

How Has Hemp Stock Performed?

What Is Hemp’s Stock History?

Who Are Hemp’s Rivals?

This lawn care juggernaut has made major investments in marijuana-based companies and poses significant competition to the smaller fry.

Aerogrow (market cap: $83 million) operates in the hydroponics business. AERO’s major advantage: it has the deep-pocketed Scotts Miracle-Gro name behind it.

Aerogrow develops, markets and sells (both retail and wholesale) indoor garden systems. The firm uses proprietary seed kits to grow flowers and vegetables, targeting both experienced and amateur gardeners. The firm supplements its product line by selling support accessories, such as lights.

Read This Story: Our American Green Stock Prediction in 2019 (Buy or Sell?)

Future Farm deploys controlled environment agriculture systems that are designed to use as little land, water and energy as possible.

Read This Story: Our Cannabis Sativa Stock Prediction in 2019 (Buy or Sell?)

Hemp, a cannabis cousin of marijuana, has gotten a bad rap for many years.

Growing industrial hemp became illegal in the 1970s when the federal government strengthened the criminal code on marijuana and related products. Hemp got caught up in the “war on drugs,” but it lacks the tetrahydrocannabinol (THC) found in marijuana that makes people get high.

In actual fact, hemp is a versatile plant with up to 50,000 uses, as this chart shows: 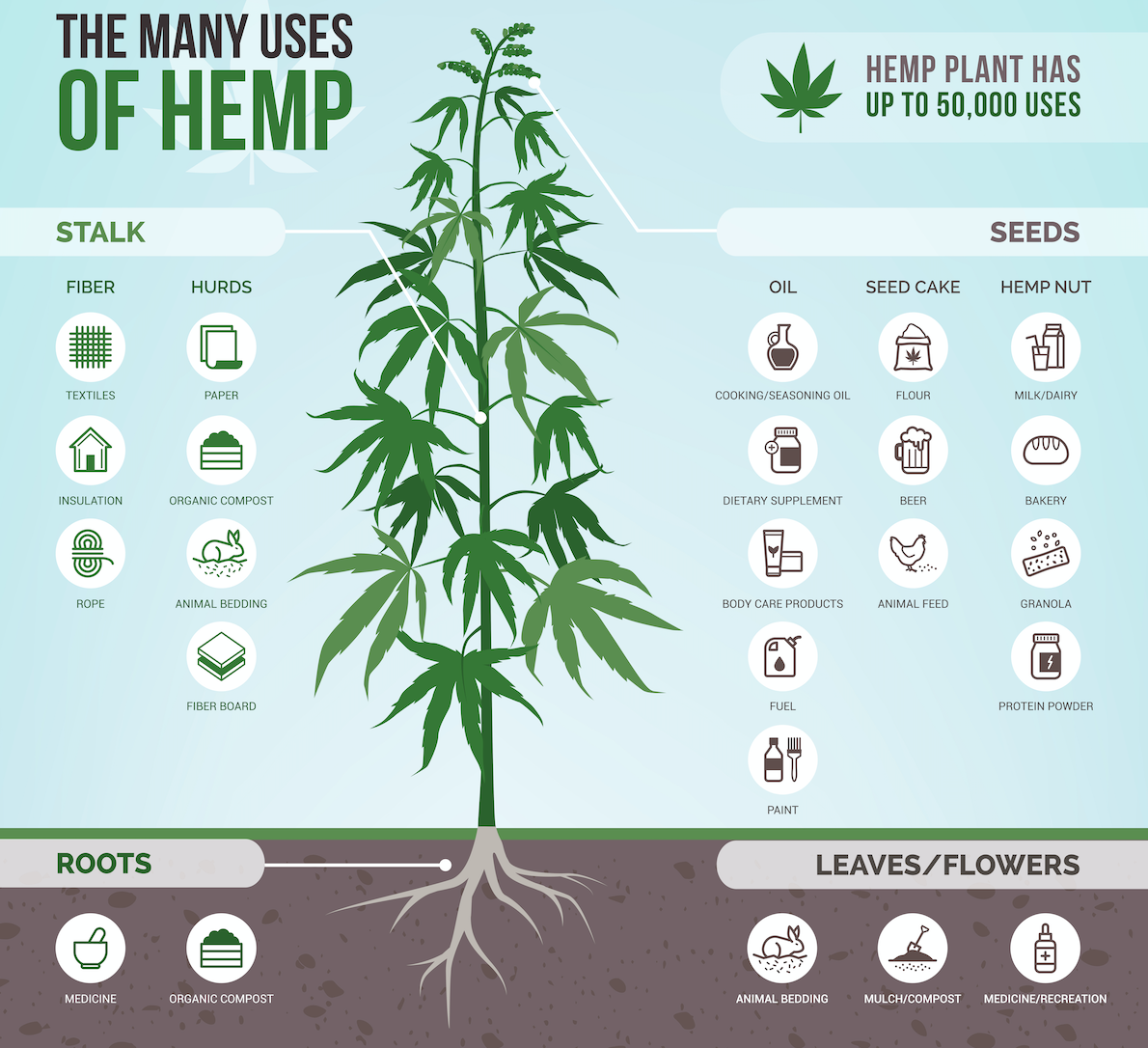 Hemp, both the plant and the namesake company, received a major tailwind with passage of the 2018 Farm Bill. Signed into law on December 20, 2018 by President Trump, the sweeping agricultural legislation essentially decriminalizes hemp.

That should stop you right there. But let’s give Hemp a fair shot and review the positives.

Demand could grow for DrillWall. The energy industry is gigantic and low-cost tools to expedite drilling will always be needed.

However, Hemp is vulnerable to getting crushed by major companies in the energy patch that could easily reproduce its core products. But therein lies a paradox: this threat also poses an opportunity, because Hemp could become a takeover target by a major oil and gas operator.

A buyout would prove a boon for Hemp’s shareholders, which is the most bullish assertion I can make for the company. To date, no potential suitors have come forth.

Here’s a video interview with Bruce Perlowin, CEO and founder of Hemp, as he discusses the company’s prospects.

The very fact that Hemp trades on the pink sheets should be enough to turn off investors. That’s bad enough. But when you also realize the company hasn’t made any filings for the past 18 months, it raises a big red flag. Investors can’t conduct due diligence without up-to-date financial statements.

The market is valuing Hemp at about $21 million, but the company has little revenue and it’s burning cash, which makes its valuation entirely speculative.

Overall Hemp Forecast and Prediction for 2019

For the past three years, Hemp has traded in a range between two cents and five cents per share. Even if you’re an aggressive speculator, there’s no rational reason to buy this dangerous penny stock.

Wall Street is obsessed with cannabis-related penny stocks, the way the Dutch in the 17th century were obsessed with Tulips. “Tulipmania” came to tears, as will many penny pot stocks.

Stocks like Hemp won’t survive the cannabis industry consolidation that lurks around the corner. It’s entirely likely that HEMP could go all the way to zero.

It’s appropriate that Hemp is based in Las Vegas, because this stock is a huge gamble. At least in a casino, when you lose money, you still get complimentary drinks.