I cover all sectors, but one of my strongest specialties is aerospace/defense. In my youth, as the editor of a publication devoted to rotorcraft, part of my job was to fly helicopters.

Over the decades, I got to know a lot of military officers and corporate CEOs in the aerospace industry. By interacting with these leaders, I learned one overarching truth: the Pentagon always gets its way. Despite economic ups and downs, military budgets are sacrosanct and consistently robust.

Although the market has recovered since its bear market lows, investors still face numerous headwinds, including a hawkish Federal Reserve, inflation that’s elevated (albeit cooling), the Russia-Ukraine war, and economic contraction in major economies (e.g., the United Kingdom).

With so many uncertainties roiling the market, I can’t blame investors for wanting to get defensive. But the question remains: what’s the best way to do so?

Consider the best defense stocks, as discussed below. We’re still mired in a bear market, but that doesn’t mean that there aren’t places to (relatively safely) stash cash.

Thanks to our lizard brains, which lurk beneath our thin veneer of civilization, our species will always be at conflict. Regardless of economic projections, technological advances, or government treaties, robust defense spending will remain a constant throughout. Indeed, the Pentagon currently enjoys huge budget increases, despite growing federal deficits. Defense contractors wield a powerful lobby on Capitol Hill that influences both political parties.

When looking for defensive investments, I like to back-test company results during the 2008-2009 recession to see how well they performed. Granted, the past does not predict the future, but if a company and its management team were able to successfully navigate those tumultuous waters, they’re worthy of respect moving forward.

During a time when many of the well-known U.S. companies saw their earnings per share drop by 30%, 40%, 50%, or more, when looking at some of the largest public companies in the defense sector, we see that they performed relatively well during the Great Recession as illustrated by this trio of industry giants:

All three of these names continue to be leaders in their respective fields. Their sales and earnings are fairly predictable due to massive government spending on defense, which should only increase with President Biden asking NATO allies to boost their defense budgets due to the conflict in Eastern Europe.

Biden this year proposed a fiscal year 2023 budget that includes $813 billion in spending for national defense, a 4% increase from the previous spending package. The defense budget increases we’re seeing at home and overseas enjoy unstoppable momentum.

As the following chart shows, the U.S. is by far the biggest spender in the world on defense: 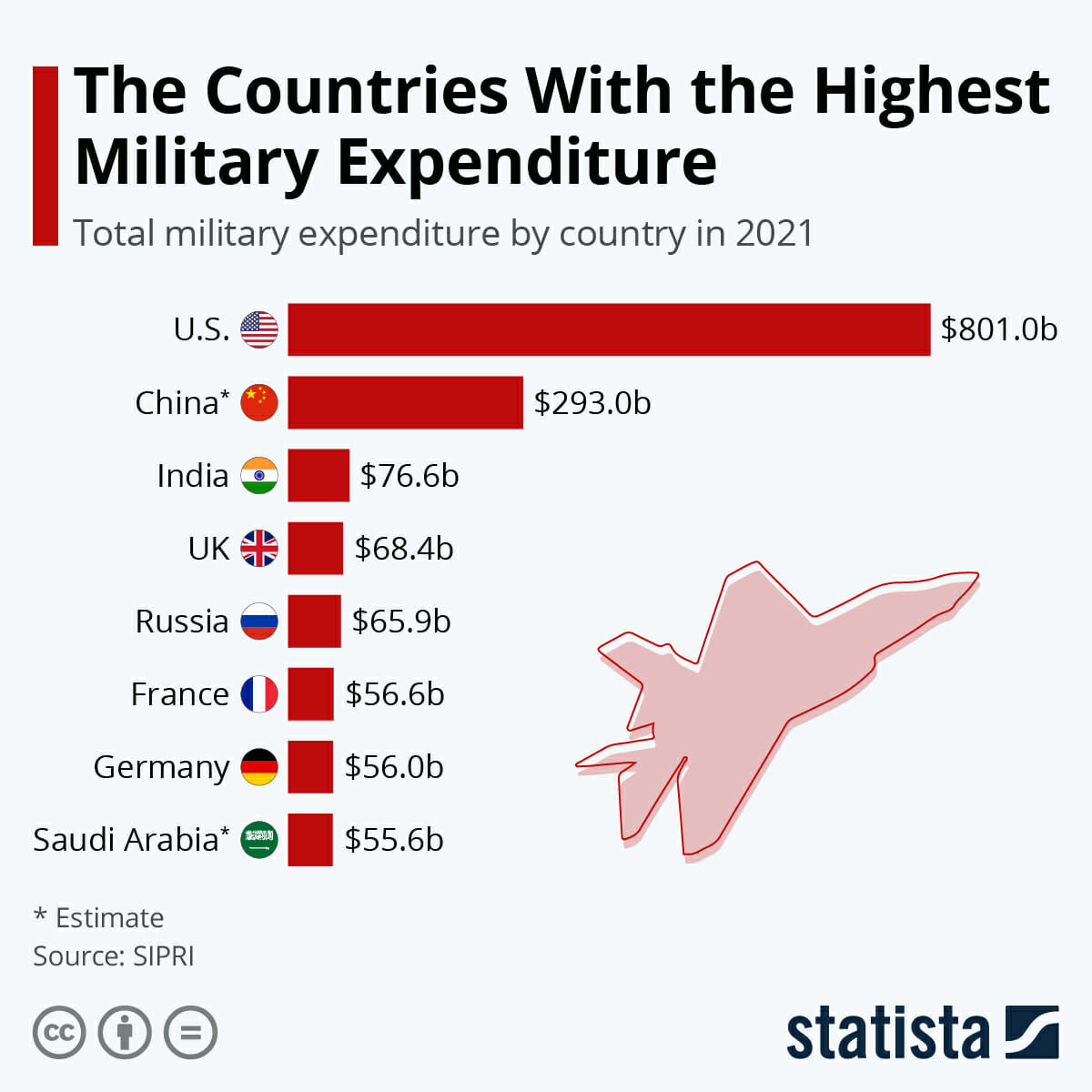 Furthermore, after recent weakness, all three stocks trade at multiples below their long-term historical averages and offer investors reliable dividend yields as well.

WATCH THIS VIDEO: “Sin Stocks” and the Virtues of Agnostic Investing

One issue that is worth mentioning is the moral aspect of investing in defense names. Some investors don’t invest in these companies for ethical reasons and I can understand why. The same qualms apply to other “sin stocks,” such as companies focused on tobacco, alcohol, gambling, firearms, marijuana, or even big oil. Investing in military companies is a decision that must be made on an individual basis.

However, what we do know is that humans have been at war with each other since the beginning of recorded history. If you aren’t morally opposed to profiting from this unavoidable fact of life, then these large-cap U.S. defense names could offer attractive investment opportunities.

One source of investment profits that should give you no qualms whatsoever is the advice of my colleague Jim Fink, chief investment strategist of Options for Income, Velocity Trader, and Jim Fink’s Inner Circle. Jim’s investment methods have enabled him to take his life’s savings of $50,000, turn the amount into $5 million, and retire early at age 37.