How to Invest During a Slowdown

The partial federal government shutdown is finally over, but the threat of an economic slowdown continues to get worse. A growing chorus is warning that the global economy could be slowing. Here’s how you can prepare your portfolio.

The International Monetary Fund (IMF) lowered its global growth estimate for this year to 3.5%, down from an estimate of 3.7% in October. The IMF noted that the downside risks to slower growth are rising, concluding:

“While global growth in 2018 remained close to post-crisis highs, the global expansion is weakening and at a rate that is somewhat faster than expected. While financial markets in advanced economies appeared to be decoupled from trade tensions for much of 2018, the two have become intertwined more recently, tightening financial conditions and escalating the risks to global growth.”

The early cycle phase marks a strong recovery from a recession. Monetary policy is eased, and sales and margins expand.

During the mid-cycle, which we have been in for quite some time, the economy experiences moderate growth. Profits are healthy, and monetary policy is fairly neutral. The stock market usually experiences consistent growth during this phase.

During the late-cycle, economic growth rates start to slow as credit tightens. This is the phase that economists are increasingly warning that we could be entering. The transition into this phase can be marked by increasing stock market volatility.

Economic growth contracts during the recession phase. While there is no evidence that we are on the cusp of recession, it typically follows the late-cycle phase.

Investing for the Business Cycle 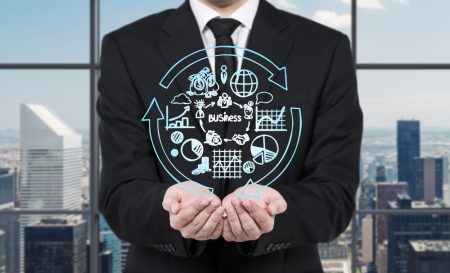 The consistent overperformers during the late-cycle are defensive and inflation-resistant sectors: the energy sector (which is off to a roaring start in 2019), the health care sector, and the materials sector.

The materials sector is primarily composed of companies involved in industries like chemicals, construction materials, metals and mining, and paper and forest products. Among its largest components are DowDuPont (NYSE: DWDP) and Sherwin-Williams (NYSE: SHW).

The utilities and the consumer staples sectors are of considerable interest during the late business cycle, not only because they generally outperform during this phase, but because they are consistent outperformers during the recession phase. If the current business cycle follows the typical pattern, then we are entering a period where these sectors are likely to outperform the broader markets for a period of several years.

History suggests now might be the right time to begin shifting money into utilities and consumer staples.

However, if you’d like a steadier way to make money, without the market roller-coaster rides, I invite you to sign up for our “Total Profits Summit.” The summit will be hosted by my colleague, the legendary investment adviser Jim Fink.

On Tuesday, January 29, you’ll see how Jim’s breakthrough investment system pinpoints stocks on the verge of shooting up 1,000%. You’ll also get details on three opportunities that Jim’s system just singled out. Each of these tiny companies has the potential to turn $10,000 into $110,000, or more.

Jim’s system generates profits in good or bad economic times, in bull or bear markets. It doesn’t care about government shutdowns or pessimistic economic predictions; it just makes money. Isn’t that the “peace of mind” you’re looking for? For details click here now.