Our Schlumberger Stock Prediction in 2019 (Buy or Sell?)

Last year was an up-and-down experience for the stock market. Remarkably, it was the first time in history that the S&P 500 had entered the fourth quarter in positive territory but ended the year in the red.

The energy sector was the worst performer in the S&P 500, returning a negative 18.1% for the year. This was the third time in the last five years that the energy sector has finished at the bottom.

During the five-year span, energy also finished next-to-last once, barely beating out telecoms in 2017 to avoid the bottom spot.

In the fifth year (2016), though, energy was the best-performing sector, returning 27.4% in 2016, so it’s been a case of feast or famine. Unfortunately, recently it’s mostly been famine. 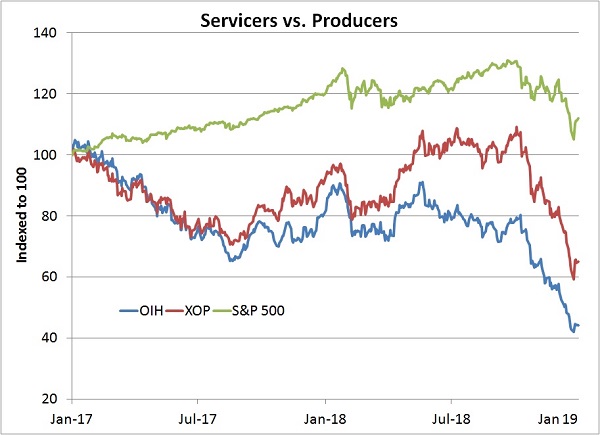 The silver lining to the decline is that there are some quality stocks in the subsector that have fallen to valuations unseen in decades. We highlight one such stock today: Schlumberger (NYSE: SLB).

Schlumberger is the largest oilfield services company in the world. Over the years Schlumberger has invested heavily in research and development that greatly helped make it stand out.

Today, SLB is a leading provider of technologies to support upstream companies in various stages of operations. (“Upstream” means exploration and production.) It employs about 100,000 people and has operations in over 85 countries.

The company has four reportable segments.

I’ve purposely kept the descriptions simple. In reality the technologies and operations involved are sophisticated and require tremendous expertise. The bottom line is that Schlumberger provides a lot of different products and services to help its clients make money in oil and gas exploration and production.

How Has Schlumberger Stock Performed?

Schlumberger stock peaked in mid-2014, right before the dreaded oil market crash, and it has gone downhill since.

In the mid-1980s, Schlumberger pioneered the use of geosteering to plan the path of drilling in horizontal wells. Ironically this technology would play a big part in why the stock is down so much in recent years. 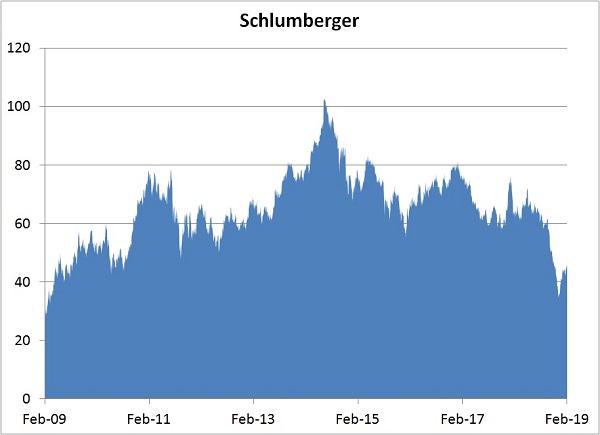 The fracking boom greatly increased the U.S.’ oil and gas output, which increased global supply too. When OPEC refused to cut production to help support oil prices in 2014, it led to the oil market crash from which the energy sector has yet to fully recover. 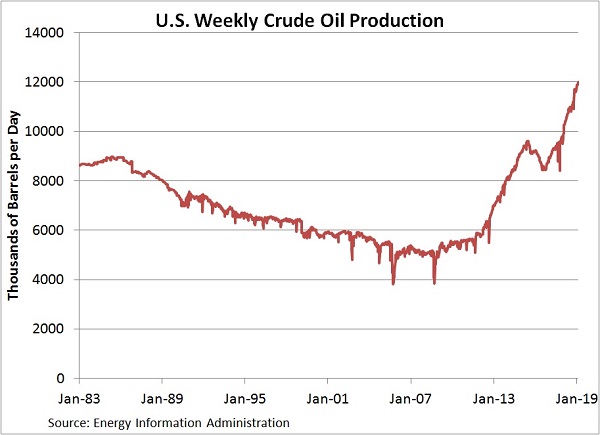 The last two years have been very tough on Schlumberger stock. The steep decline of oil prices in the fourth quarter last year was especially painful.

When oil prices rise, oil companies will reap the benefits sooner than oil service companies because they generate revenue by selling oil.

Read This Story: Our Exxon Mobil Stock Prediction in 2019 (Buy or Sell?)

On the other hand, service companies need their clients to increase spending for their revenue to rise.

Overall worldwide exploration activity is still down. Oil companies are no longer spending money on exploration like they used to. With oil prices currently nowhere near $100 a barrel, upstream companies aren’t as willing to allocate capital toward finding new assets because the perceived potential reward is lower. 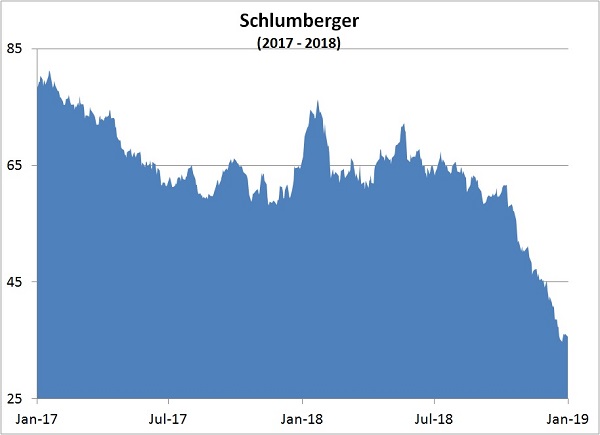 The average reserve-replacement ratio for upstream companies is estimated to be 15%. This means that on average, oil companies are replenishing only about 15% of their reserves depleted through production. Exploration spending is estimated to have fallen 61% between 2014 and 2018.

Even though the stock has risen about 25% from its December 2018 bottom, it’s still trading at a low price-to-book (P/B) ratio of 1.7, the lowest since the 1980s (not counting the December lows).

Meanwhile, Schlumberger is in the vanguard of oilfield technology, as this video vividly demonstrates.

Who Are Schlumberger’s Rivals?

Halliburton is the clear Number Two behind Schlumberger.

In particular, Halliburton has the greater exposure to fracking. Because drilling activity recovered in North America faster than in the rest of the world, this helped Halliburton stock outperform Schlumberger stock.

Lately though, U.S. frackers have cut their spending budget, and a pipeline bottleneck has also negatively impacted activity. HAL has struggled as a result.

Baker Hughes’ official name is actually Baker Hughes, a GE Company. The reason is that the company merged with General Electric (NYSE: GE) in 2017.

Even though GE has since sold off some of its BHGE shares to raise capital to address its own financial woes, it remains the majority owner at a little over 50%. However, GE has announced it will sell off its stake in the next few years.

The company is a distant third behind Schlumberger and Halliburton. Its positioning has been slipping in most business lines over the past decade.

The combination with GE was supposed to be transformative, but GE is already looking to separate.

Weatherford stock has fallen 95% in the past five years and people are whispering “bankruptcy.”

Most of Weatherford’s business lines simply aren’t up to par compared to its bigger rivals’ offerings. It hasn’t even had a profitable year since 2011.

The company is burdened with a lot of debt and given the tough operating environment now for oil service companies, Weatherford is in a bad competitive situation. A new CEO took over in 2017 to try to turn things around, but the going will be rough.

Will Schlumberger Stock Go Up In 2019 (Should You Buy)?

Schlumberger expects to see growth in its international markets in 2019, helped by new projects in Latin America, Asia, and Africa. While the outlook in North America is weaker because fracking companies are expected to reduce spending on exploration, as mentioned above the region is much smaller for Schlumberger compared to Halliburton.

OPEC and Russia don’t want to see oil prices fall further, so they agreed to cut oil production in December. If need be, they will likely take more action to support prices. Their agreed cuts could also drive oil prices higher during the year.

If the trade tensions between the U.S. and China ease, it would help bolster oil prices. Speaking of the U.S., it could ratchet up sanctions against Iran and reduce its oil exports. 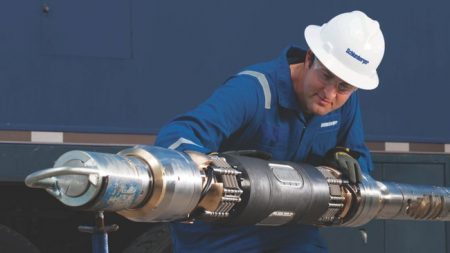 In the long run, low reserve-replacement levels as we have now are not sustainable.

There will come a point where oil prices will have to rise when it becomes evident that supply can’t meet demand.

New discoveries will likely be in areas difficult to operate, which increases the need for Schlumberger’s expertise. For example, in 2018 an estimated 82% of new discoveries were made offshore. The lowest hanging fruits have already been picked.

While there’s talk that advances in renewable energies and electric vehicles will reduce demand for oil, it remains to be seen. In any case the world will still need oil.

For income investors, Schlumberger pays a $0.50 quarterly dividend. Although the company hasn’t raised the dividend since 2015, it also didn’t cut it either.

As mentioned, the stock is selling at a deeply discounted level because investors aren’t expecting much growth. If the outlook brightens, investors should price the stock more in line with historical norms.

Will Schlumberger Stock Go Down In 2019 (Should You Sell)?

SLB shares are cheap, but they’re cheap for a reason. After all, the shares were cheap during 2018 but the share price still fell even more.

Schlumberger is a good company, but the macro environment might be too tough to expect a huge turnaround anytime soon. The mixed fortunes of the global oil tanker industry is an indicator of possible trouble.

Read This Story: Our DryShips Stock Prediction In 2019 (Buy or Sell?)

Various things could happen to boost oil prices, but there’s no guarantee they will happen.

If Schlumberger were to cut its dividend, the share price could fall sharply. This is unlikely because the balance sheet is still in good shape and the company generates more than $2 billion in free cash flow a year and it reduced its capital spending budget.

However, if the oil market remains challenging, something out of the blue can’t be ruled out entirely.

Overall Schlumberger Forecast And Prediction For 2019

SLB has already returned about 25% so far in 2019, about in line with the rally in the oil benchmarks.

A lot of what happens from here depends on how oil prices move. There are many variables involved, so there’s certainly some risk with Schlumberger stock.

If oil can have a good year in 2019, that should encourage oil companies to rethink spending more for growth. As the clear Number One in oilfield services, Schlumberger is a good bet to benefit from any significant improvement in upstream operators’ appetite to pursue growth.

Schlumberger looks like a good bet to rebound, especially for investors with patience and a time horizon of several years, given its extremely depressed value now.