Will Align’s Stock Lose Its Bite?

For investors, there are few things more exhilarating than unearthing a stock that returns many times the original investment. Of course, this is easier said than done. If it were easy, everyone would be super rich.

For every Apple (NSDQ: AAPL) or Amazon (NSDQ: AMZN) out there, there are many other companies that don’t go very far or fail altogether.

Apple and Amazon have literally altered the way we live. But to find a mega success in investing, you don’t necessarily need to find companies with dramatic influence like those two juggernauts. Sometimes even a seemingly small innovation is good enough.

The following chart shows the relative performance of a certain stock versus the S&P 500 over the past 10 years. As you can see, even with a steep drop at the end of last year, this stock has absolutely crushed the S&P. 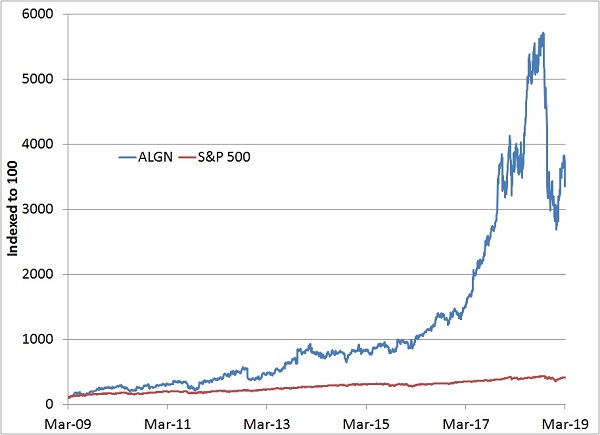 Even though the line for the S&P looks like it’s almost flat, the index has actually more than quadrupled during this period. The line only looks like it barely climbed because of how much ALGN moved in comparison.

In the last 10 years, this stock has risen from under $7 to about $235. One thousand dollars invested a decade ago in ALGN and held until today would have turned into more than $34,000 despite that big price dip late last year.

As someone who wore braces, I can attest that not only are they uncomfortable and difficult to keep clean, they are also unsightly. Especially for adults, wearing braces can be a royal pain in the rear. Imagine having an important lunch meeting with a client while trying not to get food caught in your braces, for example.

This is where Align (market cap: $19.4 billion) saw the opportunity to invent an alternative that improves on the original.

Align’s trademarked InvisAlign is made of clear plastic and custom-made for each patient’s teeth. They are more like retainers than braces.

They feel more comfortable and look better than traditional metal braces, and the cost is comparable. Most insurance plans cover InvisAlign as they would cover braces.

A patient gets trays of the aligners and wears each one for a set amount of time. Each aligner is designed to shift teeth just a little bit toward their desired position. They are removable when necessary.

Although InvisAlign may not sound very fancy, it’s a breakthrough in orthodontics.

Benefit of Braces Without the Drawbacks

Like it or not, looks matter in both personal and professional settings. Most people want nice looking teeth. InvisAlign offers the opportunity to get straighter teeth without the drawbacks of braces.

Originally InvisAlign was created for dentists. However, once orthodontists saw the popularity of the product, they wanted to join the action.

Because orthodontists are trained to move teeth, they are the preferred InvisAlign providers, but patients can get InvisAlign from both.

Since InvisAlign hit the market in 2000, more than 5 million patients have received treatment. In 2018, InvisAlign shipped 1.2 million cases, up 31.9% year over year. Total revenue grew to $1.97 billion, and net profit was $4.92 per share. It’s estimated that use of clear aligners have tripled over the last five years. Still, clear aligners represent only about 15% of the orthodontics market, suggesting plenty of growth runway ahead.

However, the downside is that success attracts competitors. Imitation is the best form of flattery, but more competition is not good for business. Some of Align’s patents have expired in the last few years and a number of startups are looking to challenge Align with cheaper, more basic versions.

Align actually owns a 19% equity stake in its biggest challenger, private company SmileDirectClub (SDC). In 2016, Align agreed to supply the clear aligners for SDC. But the partnership has been rocky and the two companies won’t renew the deal once it expires in 2019.

SDC operates a direct-to-consumer model. Patients can take an impression of their teeth from home or from an SDC store and do their checkups remotely.

The cost is lower but SDC treatment only works for mild cases. By contrast, InvisAlign requires an office visit and is more expensive, but it works for more complex cases.

Align is still the clear Number One, but there’s more competition now. Last October, a bad fourth-quarter guidance sent the stock down 25% and the stock hasn’t fully recovered. Even after the plummet, given the more uncertain growth outlook, the stock still looks expensive at more than 30-times projected forward-year earnings.

The company is still growing and should continue to grow because the clear aligners market still looks very good, but there’s significant uncertainty. At least in mild patient cases, clear aligners are becoming commoditized. This means Align not only faces a tougher fight for market share, but it will encounter price pressure. Align still enjoys growth ahead and it’s an appealing stock, but the days of exponential market-crushing gains could be behind it.

Align’s case shows that it’s important to find a company with a breakthrough story… and invest early. My colleague Genia Turanova has the time-proven ability to do just that.

Genia Turanova is the chief investment strategist of the trading service Fast-Track Millionaire. Genia knows how to pinpoint fledgling growth companies that are flying under the radar. She steers her followers to these “rocket stocks” before they blast off.

Genia has found a little-known biotech that’s in the forefront of medical innovation. This Swiss-based company is developing a gene-editing system that’s about to revolutionize health care. The time to invest is now, before the Wall Street crowd catches on and bids up the share price. Click here for details.