As I observe the prolonged volatility of energy prices, an ancient Greek myth comes to mind.

As the story goes, King Tantalus was condemned by the gods to spend an eternity in hunger and thirst. He was made to stand in the underworld’s zone of punishment, in a pool of water under a fruit tree. Although the tree had low branches, he was never quite able to reach the fruit, and whenever he tried to drink the water, it receded.

Well, energy prices are tantalizing investors, yet again. As I explain below, the energy patch has been waxing and waning, with a sustained recovery just out of grasp.

Quality energy stocks have sold off along with the fall in crude prices, which makes them value plays now. Many energy stocks pay dividend yields that are higher than bond yields. What’s more, their share prices should rise when oil prices inevitably resume their upward trajectory. Indeed, the price of crude already is bouncing back.

Based in the United Kingdom, BP is a global integrated “super major” oil and gas company, with upstream and downstream operations. With a market cap of $146.4 billion, BP ranks as the sixth largest energy company in the world by market capitalization.

BP operates about 18,300 service stations around the world. The company’s biggest division is U.S.-based BP America. In Russia, BP owns a nearly 20% stake in Rosneft, the world’s largest publicly traded oil and gas company by production.

BP has since recovered from the 2010 Deepwater Horizon oil rig explosion and spill in the Gulf of Mexico, one of the worst environmental catastrophes in modern history. The company has settled all fines and charges and has strengthened its safety and environmental practices.

But in today’s topsy-turvy energy markets, just how safe is BP’s dividend? Let’s take a look.

Yes. A dividend is a portion of a company’s profits that is distributed to shareholders as a way to compensate them for their investment. The most common type of dividend is a cash dividend, in which shareholders receive a lump sum for every share they hold in the company.

Companies (especially growing ones) seeking to reduce their share prices may opt to distribute stock dividends instead of a cash dividend.

What Is BP’s Dividend? 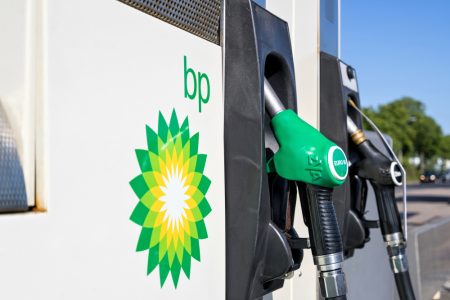 The annualized payout is $2.46, paid quarterly.

Dividends are usually paid on a quarterly basis after the company finalizes its financial reporting for the quarter. Some companies pay their dividends semi-annually, while others pay on a monthly basis.

The payment frequency, however, is of secondary importance. The greatest concern for dividend and income-oriented investors is the dividend yield.

What Is BP’s Dividend History? 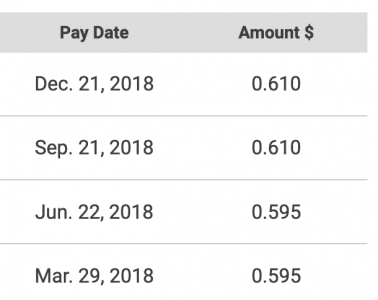 What Is BP’s Dividend Yield?

BP’s dividend yield is among the highest of the energy super majors, making it a blue chip income stock.

When Is BP’s Dividend Payout Date(s)?

Dividend payments are usually made in cash, but sometimes a company will pay a stock dividend that increases the number of shares held by investors.

And yet, BP faces strong growth prospects. The average analyst expectation is that BP will rack up five-year earnings growth of 31.5%, on an annualized basis.

BP is among those rare equities that provide a combination of income, growth and value.

For a dividend to be sustainable, the amount paid out to investors must be well covered by the amount of cash coming into the business. How well the dividend is covered by actual cash is measured by the payout ratio.

Also positive for BP’s dividend are rising oil prices, which are recovering from their plunge in late 2018. The following chart shows the comparative per barrel prices for U.S. benchmark West Texas Intermediate (WTI) and international benchmark Brent North Sea crude, over the past 12 months. 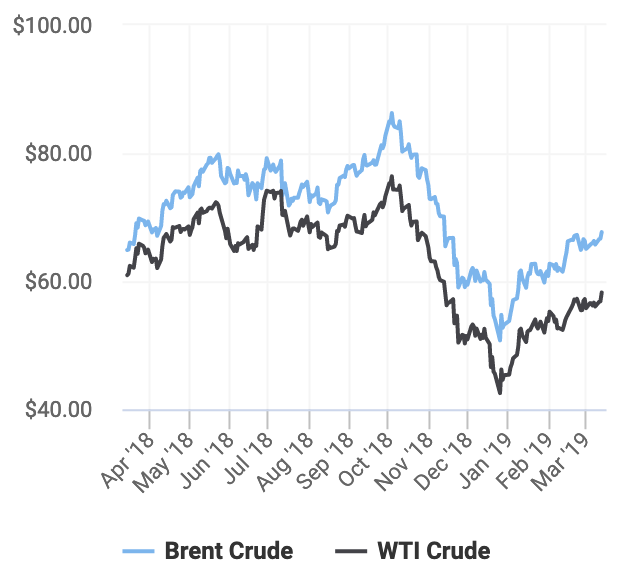 The price of oil swooned in the fourth quarter of 2018 as investors worried about slowing global growth and a persistent glut of crude. The stock market followed suit. But oil demand should pick up again and provide a sustainable tailwind for oil prices, especially in emerging markets as rising middle classes buy cars and other oil-guzzling amenities.

For Henry Hub spot natural gas, EIA pegs its 2019 forecast at about $3.20/million British thermal units (MMBtu), down from an average price of $3.29/MMBtu in 2018. However, BP’s long-term view for natural gas is bullish. The company forecasts that the world’s total energy demand will grow by a third through 2040. The majority of that new energy will derive from renewable power and natural gas.

This video shows BP’s latest outlook for the global oil and gas industry. When it comes to energy prognostication, BP’s analysis is considered the gold standard.

Driving volatility in the energy sector is a supply-and-demand equation that’s out of whack.

The shale production revolution in North America turned the U.S. into the world’s largest producer of oil. America actually dethroned Saudi Arabia as the king of oil producers, a landmark that I thought I’d never see in my lifetime.

However, production in the U.S. has become so prolific, it has spawned a shortage of crucial fracking materials such as water and sand. Transportation bottlenecks have arisen as well, with extreme tightness in pipeline takeaway capacity.

OPEC production cuts have succeeded in bringing down excess supply. The worsening crisis in Venezuela and the reinstatement of sanctions on Iran should also constrict supply and lift crude prices.

The energy industry is highly sensitive to U.S. sanctions because the petrodollar is the single most important currency in global trade. Washington can exert major pressure on countries by restricting access to the dollar through its financial institutions.

Geopolitical tensions also have a tendency of boosting oil prices. A military or terrorist incident involving “hot spots” such as the Korean peninsula, the Asian subcontinent, or the Middle East would wreak havoc in the energy patch and send oil prices soaring.

As supply tightens, demand is growing. According to New Energy Outlook 2018, the most recent energy report from BloombergNEF, global oil demand in 2050 is projected to be about 15 million barrels per day higher than 2017 demand.

The energy and broader stock markets have moved roughly in tandem over the past 12 months or so, in large part because analysts interpret rising oil prices as a sign of overall economic health. Rising oil prices lift not just energy stocks such as BP but also Wall Street’s spirits.

In this overall energy industry context, BP’s dividend yield remains secure and attractive. It’s also important to note that the company’s fundamentals are no longer threatened by Gulf oil spill costs, which have peaked and are now declining. BP has been diligent about working with the U.S. government to clean up the Gulf site, after Uncle Sam approved BP’s shoreline cleanup plan back in 2011.

BP continues to make major investments, such as $2.2 billion in an Abu Dhabi onshore oil concession and nearly $1 billion (over a number of years) in deepwater gas discoveries off the coast of West Africa. BP also has greenlighted deepwater development in the Gulf of Mexico that’s expected to cost $9 billion.

Those projects are essential to growing production. They also demonstrate the company’s global reach and, in the case of Abu Dhabi, commercial relationships nurtured over many decades.

If you’re yearning for high dividends along with exposure to energy sector growth, you needn’t suffer the same fate as Tantalus. Grab BP stock with both hands.