After Anadarko’s Big Payday, Who Is Next?

Chevron agreed to pay $65 per share of Anadarko, which was a 39% premium to Anadarko’s last closing price prior to the deal’s announcement. Chevron’s outlay will be $33 billion plus assumption of Anadarko’s $17 billion of debt for a total cost to Chevron of $50 billion.

Let’s examine the reasons behind the deal and what it means for investors.

Anadarko has an attractive global portfolio, but there were several synergies that made it especially attractive for Chevron. The key to this deal is the promise of the Permian Basin.

As Chevron points out, the deal connects several of its existing fields to create a 75-mile-wide corridor in the Permian Basin. Connected acreage allows for drilling of longer laterals, enabling a producer to extract more oil from a well, which in turn drives down the cost per barrel.

Chevron was already one of the top acreage holders in the Permian. This acquisition boosts Chevron’s acreage by 240,000 net acres to over 1.4 million net acres in the Delaware Basin (in the western part of the Permian), where shale oil economics are probably the best in the country.

One additional synergy for Chevron is that they hadn’t been a major player in the midstream space, which involves the transport and storage of oil and gas. This deal gives Chevron a 55% stake in Western Midstream Partners (NYSE: WES), a publicly-traded $16 billion master limited partnership (MLP).

Anadarko’s shareholders are undoubtedly pleased by the immediate 30+% surge in the price of their stock. But a number of other operators in the Permian Basin saw their share prices rise as well, in anticipation that they could also be an acquisition target.

Which companies could be next on the acquisition list in the Permian? And which could be interested in making acquisitions? Let’s compare some of these companies to Anadarko.

Beyond Chevron, the largest acreage holders in the Permian Basin include Occidental (NYSE: OXY), Apache (NYSE: APA), ExxonMobil (NYSE: XOM), and Concho Resources (NYSE: CXO). Occidental, in fact, reportedly attempted to acquire Anadarko prior to Chevron sealing the deal. But Occidental may now find themselves in the crosshairs of a bigger player looking to shore up their Permian portfolio.

Let’s first take a look at the largest companies operating in the Permian according to enterprise value. This metric is preferred over market capitalization, because it includes a company’s debt. In the case of a potential acquisition, the acquiring company would be responsible for this debt in addition to the purchase price. Hence, it is a more comprehensive representation of a company’s market value.

I have included the integrated supermajors that could have the ability to make major acquisitions, three of the larger exploration and production companies (which could make an acquisition or be a target themselves), and Anadarko for comparison. All data were retrieved from the S&P Capital IQ database.

Based on their size and debt metrics, ExxonMobil and Chevron still appear to be the most capable of pulling off a major deal. Royal Dutch Shell (NYSE: RDS.B) has been moving in the direction of becoming a natural gas company and has already made major capital expenditures in this area in recent years. In 2016, Shell made its own major acquisition, a $70 billion deal for BG Group. Meanwhile, Total (NYSE: TOT) hasn’t shown much interest in the Permian.

BP (NYSE: BP) may not have an appetite for an acquisition as it continues to be weighed down by its obligations from the 2010 Deepwater Horizon oil spill. As an aside, the continued fallout from that disaster has also resulted in BP possessing the cheapest reserves on the books by far of any company listed in the table. Also note that the EV/Res metric for integrated supermajors isn’t directly comparable to pure oil producers like Anadarko, as the former also have midstream and refining assets.

ConocoPhillips appears to be the most attractive target for an acquisition from a pure valuation perspective, but as the largest pure oil company it would be a large bite for even ExxonMobil. With respect to making an acquisition, ConocoPhillips CEO Ryan Lance stated earlier this year that the company isn’t feeling any pressure to do so.

Occidental also falls into the category of potentially making an acquisition or of being acquired. On a relative basis, the firm is more expensive than ConocoPhillips, but on an absolute basis the price would be more manageable.

What about smaller players? Based on the price movement following the announcement of the Chevron-Anadarko deal, investors are clearly betting that more deals will follow.

Below are snapshots of the metrics of potential acquisition targets (with Anadarko for comparison), including some of the large players listed in the previous table. I have included the single-day jump in the share price following the announcement of the Chevron deal. 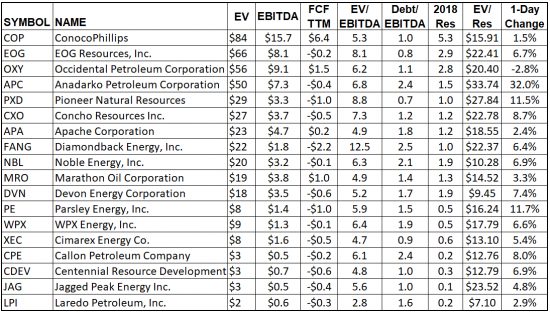 Note that the double-digit gains of both Pioneer Natural Resources and Parley Energy imply that investors believe they could be next on the acquisition list. Parsley looks attractively priced according to its enterprise value and total reserves. Several other companies stand out, such as Devon Energy and Cimarex, although all of these companies outspent their cash flow in 2018. An acquisition by one of the larger players could give them the efficiencies and economies of scale to rectify that.

Another name on the list that stands out in a negative way is Diamondback Energy. This has long been one of my favorite Permian Basin oil companies, and an outstanding performer for years. But after its 2018 acquisition of Permian-producer Energen, Diamondback now looks to be richly valued according to several metrics.

Ultimately, price and valuation are only part of the equation. Anadarko wasn’t the cheapest acquisition target for Chevron, but Chevron liked the synergies of Anadarko’s locations. Consequently, every major operator in the Permian is more likely to acquire companies whose properties are adjacent to their own. A deeper dive thus becomes an exercise in studying maps of the Permian producers, large and small.

For investors seeking a windfall, the temptation to pinpoint takeover targets is bound to increase, as M&A activity in the energy patch picks up steam.

Another way to reap a windfall is to follow the advice of my colleague Jim Fink, chief investment strategist of Options for Income.

Jim Fink has developed a “profit calendar” trading system that allows you to collect payments every Thursday, similar to a paycheck. These “paychecks” can range in value from $1,150 to $2,800, but average out to $1,692.50. Jim developed his strategy by studying the tried-and-true practices and principles of Chicago pit traders, and modified them for use online.

Jim has built a personal fortune using his strategy, and now he’ll teach you the three simple steps to follow his example. Click here to learn more.