The M&A Boom in Commodities: How to Profit

A few days ago, my colleague Robert Rapier wrote about Chevron’s (NYSE: CVX) impending $50 billion acquisition of rival oil driller Anadarko Petroleum (NYSE: APC). As Robert succinctly noted, “The key to this deal is the promise of the Permian Basin.”

In late February, I reported that Barrick Gold (NYSE: GOLD) launched a hostile takeover bid for rival gold miner Newmont Mining (NYSE: NEM). That announcement came only a month after Barrick closed on its $6.5 billion acquisition of another gold miner, Randgold Resources.

As I predicted, that deal did not come to fruition in part because Newmont already had a $10 billion deal of its own in the works to acquire Goldcorp (NYSE: GG) that closed this week.

Why are all these big merger and acquisition (M&A) transactions happening in the natural resources sector now?

Two macroeconomic megatrends are converging that will drive up the price of hard assets. The companies that control those resources will be in a position to reap huge profits. More importantly, so will their shareholders.

Below, I’ll share my thoughts on where the next buyout in the commodity sector may occur and how you can profit from it.

There are two driving forces behind global inflation over the next 10 years:

More than a third of the world’s population lives in China and India. Combined, more than a billion people are projected to enter the ranks of the middle-class in these two countries over the next decade.

By definition, middle-class households earn enough income to afford more than just the basic necessities of life. They buy houses, drive automobiles, and become ingrained in the consumer economy. That behavior increases demand for the natural resources that build their homes, fuel their automobiles, and stock their local grocery stores.

At the same time, the U.S. federal deficit is projected to increase dramatically over the next two decades. According to a recent report from the Congressional Budget Office, “Because of persistently large deficits, federal debt held by the public is predicted to grow steadily, reaching 93% of GDP in 2029 (its highest level since just after World War II) and about 150 percent of GDP in 2049 – far higher than it has ever been.”

A deficit of that magnitude would push up interest rates as the U.S. Treasury issues more debt to finance the budget. As that happens, the value of the dollar will weaken which in turn drives up inflation. Rising inflation hurts most businesses, but it is a boon to commodity providers since it drives up the value of the hard assets they possess.

Moving Down the M&A Food Chain 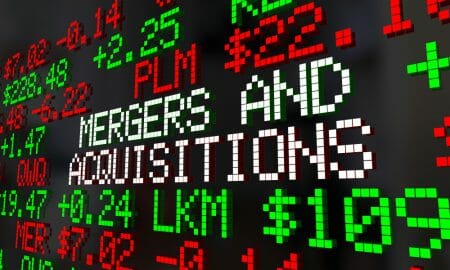 Profiting from increasing M&A activity in the commodities sector may be as simple as owning smaller companies in the energy, metals, and agriculture industries that are likely to be acquired in the years to come. An easy way to do that is to look at the portfolio of the Fidelity Global Commodity Stock Fund (FFGCX), whose holdings are equally divided between those three categories.

You shouldn’t be surprised to see that oil supermajors Exxon Mobil (NYSE: XOM), Royal Dutch Shell (NYSE: RDSA), Total SA (NYSE: TOT) and Chevron are among the 10 largest holdings of this fund. So is mining company Rio Tinto (NYSE: RIO) and agriculture giant Archer-Daniels-Midland (NYSE: ADM). It’s safe to assume that companies of that size will be the acquirers in any future M&A transactions.

To my way of thinking, there may be more value in looking at the list of the 10 smallest holdings in this fund. That’s because they are more likely to be acquired, with their stock being purchased at a large premium.

As of February 28, the 10 smallest holdings in this fund were:

See a lot of names that you recognize? Me neither, but that’s the point. As the pace of consolidation quickens, larger companies will reach further down the food chain to gobble up smaller businesses owning natural resources to maximize market share. How soon that may happen is anyone’s guess. But given the accelerating velocity of M&A activity, it may be time to start adding some of these stocks to your portfolio.

I just showed you ways to leverage fast-moving change to your profitable advantage. My colleague, Jim Fink, has devised even better ways to make money in today’s turbulent investment conditions.

Jim is the the chief investment strategist of Options for Income and Velocity Trader. With Jim Fink’s trades, you can ignore market uncertainty. That’s because his proprietary trading method generates market-beating gains in good times or bad, and whether the market is going up, down or sideways.

Jim built a $5.3 million personal fortune using his system. Now he wants to share it with you. In fact, his recent string of triple-digit winners has sent investors clamoring for access to his trades. And the only way to get one of them is to click here.