Turbocharge Your Portfolio With Small-Cap Stocks

If you’re eager to add an extra boost to your portfolio’s growth potential, consider adding small-cap stocks to your asset allocation mix. History shows that the small fry tend to generate outsized gains over time. Below, I’ll explain their pros and cons and why you shouldn’t ignore them.

Of course, for stock market novices or investors whose goals are conservative, it makes sense to focus on large-cap stocks, particularly mega-cap stocks (those with market capitalizations north of $100 billion).

These companies became “mega-caps” because they are very successful. They operate established businesses that generate billions of dollars in revenue and profit every year. They usually have access to a great amount of capital and resources, so they are not likely to suddenly fall into deep financial trouble, or even bankruptcy. Moreover, because they tend to have been in existence longer, there’s more information to research and analyze, allowing you to make an informed decision.

Even large-cap companies that lose their edge usually give off plenty of warning signs. For example, even in the sad story of Sears, shareholders had plenty of opportunities to jump ship. Unless you didn’t pay attention for 20 years, you had many chances to get out.

The bottom line is, if you invest in a portfolio of very large-cap stocks, you can rest easy you are likely not going to lose your shirt.

The Case for Small Fry 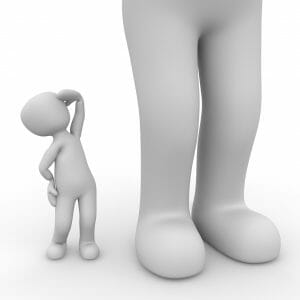 However, for growth-oriented investors with a higher risk tolerance, it makes sense to invest in some small-cap stocks.

The definition of small-cap can vary among brokerages, but broadly speaking, it is a company with a market cap of between $300 million and $2 billion.

Compared to large companies, it’s easier for a small company to grow fast, in percentage terms.

A smaller company likely also has more untapped market potential. A mature large company probably has already reached most of its addressable market and would find it harder and harder to grow at a fast pace. It would have to take market share from rivals and expand to new markets.

One way large companies do this is to buy out smaller ones, to acquire new avenues for growth when the large company has reached a growth bottleneck. When a small company gets acquired, it’s usually a boon for its shareholders.

In the case of little-known stocks though, there’s a greater possibility for mis-pricing in the market that an astute investor could exploit. For example, there could be a startup company that hasn’t caught the eye of the bigwigs yet. This allows an investor to buy shares before the stock becomes better known and potentially attracts more buyers.

The bottom line is, if you can find a quality small-cap company, it offers higher potential upside for its investors than your average large-cap company. The chart shows the relative performance of the Russell 2000 Growth Index (small-cap growth stocks) against the S&P 500 (large-cap stocks) over the past 10 years. 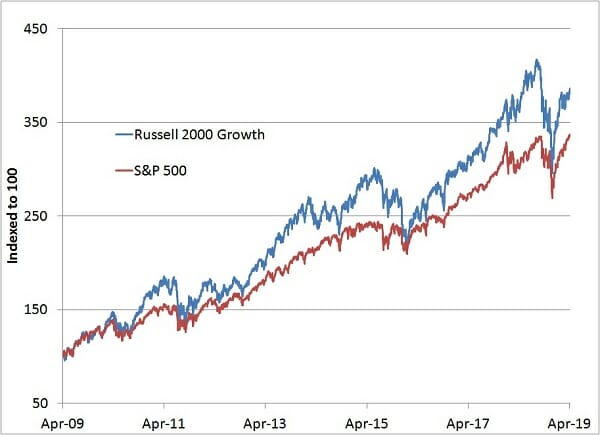 But Beware of the Risks

But of course, small caps come with higher risks than large-cap companies. For one, they don’t have the same access to capital. One unexpected major hiccup could result in insolvency. Stockholders have low-priority claim in the event of liquidation, so if the company goes out of business, as a shareholder you could end up getting back pennies on the dollar or nothing at all.

Other drawbacks include typically lower trading volume. Most retail investors won’t have so many shares that they can’t get out when they want to, but if an institutional investor dumps its holdings at once, it may have an outsized impact on the share price.

Additionally, since there’s usually less analyst coverage on small-cap stocks and they have a shorter history, it’s harder to know what exactly you are investing in. And if there’s not a lot of institutional ownership in a stock, because retail investors on average tend to be more fickle, there’s a good chance for big ups and downs in the stock price.

But there’s a way to turn big ups and downs into big profits. Just follow the advice of my colleague Jim Fink, chief investment strategist of premium trading services at Investing Daily.

Jim has come up with a system that turns even small stock movements into huge winners. He routinely scores gains up to 18 times better than conventional buy-and-hold plays. Now Jim wants to share how his proprietary system works… at the Ultimate Profits Summit.

This free online event airs on May 9 at 1:00 p.m. For those who sign up, Jim will reveal how his new system pinpoints four types of trades that could hand you gains of 114%, 211%, 246% and 433%. Sometimes in as little as 36 hours. Spaces are limited; don’t get left out. Reserve your spot now by clicking here.