The stock market is once again trading near record highs. As recently as late December, stocks were in a freefall. But the Federal Reserve changed its tune on interest rate hikes and suddenly stocks came roaring back into vogue.

That’s great, but the stock market’s recent rise has caused some sectors to become overvalued. There are many ways to measure fair value, but I prefer using the PEG ratio to compare one sector to another.

If you are not familiar with it, the PEG ratio compares a company’s P/E (price-to-earnings ratio) to its projected rate of growth in earnings over the next five years. For example, a company with a forward P/E ratio of 20 with a projected earnings growth rate of 10% would have a PEG ratio of 2.0 (= 20/10).

Although he did not invent the PEG ratio, legendary mutual fund manager Peter Lynch made it famous. Lynch ran the Fidelity Magellan fund from 1977 to 1990. During that time he produced an astounding average annual return of 29% using the PEG ratio as his guide.

Consumer Stocks at Top and Bottom

Since every stock has a PEG ratio, each sector of the stock market also has a PEG ratio that is the average of its component companies. According to Yardeni Research, as the stock market was bottoming out in late December, the PEG ratio for the S&P 500 index was 0.9. But by the end of April, it had climbed to 1.1, slightly above Lynch’s threshold for fair value. 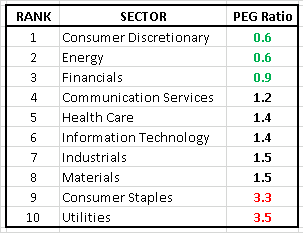 However, not all sectors have participated equally in the recent rally. In fact, there is a wide dispersion in PEG ratios from one sector to the next. Of the 10 S&P 500 GICS (sector) categories (excluding Real Estate), seven have PEG ratios above 1.0 while three are below it.

Not surprisingly, the utility sector is considered the priciest with a PEG ratio of 3.5. However, the PEG ratio is biased against utilities since many of them are regulated and have limited growth prospects. Most investors own utilities for their reliable dividends, which the PEG ratio ignores.

The consumer staples sector clocks in second-highest with a PEG ratio of 3.3, more than triple Lynch’s maximum. To a large extent, the low earnings growth rate attached to many of these stocks reflects the outsized influence Amazon (NSDQ: AMZN) is having on future earnings projections for the dozens of product manufacturers and retailers in this sector.

At the other end of the spectrum, consumer discretionary stocks appear cheapest with a PEG ratio of 0.6. Many of them are trading at very low P/E ratios, even though well-managed retailers such as Best Buy (NYSE: BBY), Target (NYSE: TGT), and Dollar General (NYSE: DG) have proven they can consistently grow earnings at a rate that exceeds the overly pessimistic earnings forecasts that Wall Street analysts predict for them.

Also looking cheap with a PEG ratio of 0.6 are energy stocks, which are notoriously volatile. Attempting to predict what oil prices will be one year from now is impossible, much less five years into the future. For that reason, I don’t recommend using the PEG ratio to evaluate energy stocks.

What this chart reflects is the degree to which Amazon has distorted future earnings performance for the entire consumer industry. Consumer staples stocks are expensive because assumptions for future earnings growth are decidedly pessimistic. At the same time, consumer discretionary stocks are cheap because nobody trusts that their recent earnings performance can be duplicated much longer.

In both cases, the truth probably lays somewhere in between. As Amazon’s cloud computing business continues to grow, the company’s focus is likely to shift away from retail a bit. At the same time, the retail space will consolidate until the weakest competitors have been eliminated.

Until then, there are bargains to be found in the consumer space. Selectively buying undervalued retail and manufacturing stocks is one way to profit from the true “Amazon Effect.”

However, my colleague Jim Fink has devised an even better way to make money.

Jim Fink is chief investment strategist of Options for Income and Velocity Trader. Over his many years in the trenches of Wall Street, Jim has perfected a system that turns even small stock movements into market-thumping gains.

Now Jim wants to share how his proprietary system works… at the Ultimate Profits Summit, scheduled for May 9 at 1:00 p.m. During this free online event, Jim will show you, step-by-step, how his new system pinpoints four types of trades that could hand you gains of 114%, 211%, 246% and 433%. Sometimes in as little as 36 hours. I’ll be in attendance, too.

Spaces are limited. Reserve your spot by clicking here now.