Anatomy Of A Bidding War

There are several companies that most investors could put in their portfolios and leave for decades. Apple (NSDQ: AAPL). Disney (NYSE: DIS). Walmart (NYSE: WMT). Chevron (NYSE: CVX). Yes, Chevron.

In fact, for most of the past 20 years, Chevron has outperformed the S&P 500, Disney, and Walmart. It’s the kind of company that has delivered superior returns to shareholders over time. The past five years have been an anomaly for Chevron as the plunge in oil prices caused performance to lag, but Chevron still outperformed its peers during that period.

I have learned to trust Chevron’s management. However, I wasn’t completely thrilled with the recent announcement that they would acquire Anadarko (NYSE: APC). Chevron agreed to pay a 39% premium to Anadarko’s last closing price prior to the deal’s announcement. Chevron would also assume Anadarko’s $17 billion debt.

The deal was great for Anadarko shareholders. Analysts at Robert W. Baird had ranked Anadarko 48th out of 50 oil producers in the Delaware portion of the Permian by average revenues per well. Baird analysts noted last month that Anadarko “has consistently ranked as one of the worst productivity per well companies in the Delaware.” The company hasn’t generated annual positive free cash flow since 2014. But Anadarko shareholders nevertheless hit the jackpot.

Chevron shareholders weren’t as thrilled with the acquisition. Since the deal was announced, Chevron shares have shed 7%.

Occidental Petroleum (NYSE: OXY) had made their own bid for Anadarko. In fact, it was more money than Chevron offered. Chevron’s offer would have given Anadarko’s shareholders 0.3869 shares of Chevron and $16.25 in cash for each Anadarko share. At the time the deal was announced, Chevron was trading at $65 a share.

Anadarko opted for Chevron’s offer, citing unspecified structural issues with the Occidental offer. But Occidental didn’t give up. Anadarko shareholders still had to approve the Chevron offer. Before they could do so, Occidental upped its bid. The current offer from Occidental is for $76.00 per share, consisting of 78% Cash and 22% stock.

S&P Market Intelligence recently broke down the synergies for both Chevron and Occidental: 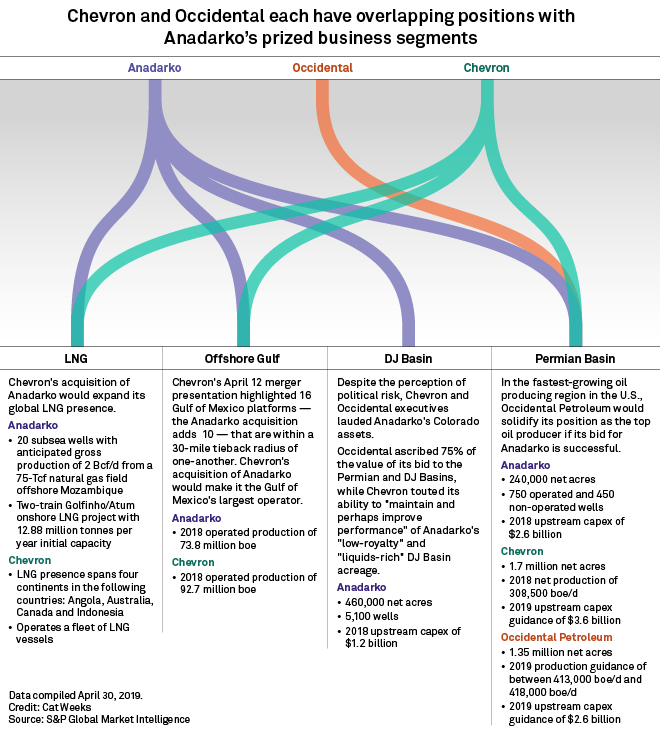 Occidental’s revised offer has been unanimously approved by the Occidental Board of Directors. Because Chevron’s shares have declined since the original offer, the new Occidental offer represents a premium of 23% to the $61.62 per share value of Chevron’s pending offer as of market close on May 3, 2019.

Occidental CEO Vicki Hollub made the case for her company on CNBC, arguing that Occidental’s experience in the Permian Basin is superior to Chevron’s:

“We are the right acquirer for Anadarko Petroleum because we can get the most out of the shale. We have a lot more experience there. We are performing really, really well, and what hasn’t been talked about very much is that the upside in this deal is the shale play, is the shale development.”

Billionaire Warren Buffett jumped into the fray as well. Berkshire Hathaway (NYSE: BRK.B) announced that it would invest $10 billion in Occidental Petroleum to aid in sealing the deal. But Buffett’s help comes at a high price for Occidental. Berkshire Hathaway would receive 100,000 shares of preferred stock that pay a dividend of 8% a year. Occidental’s common stock yields 5.4%.

In connection with Occidental’s proposal to acquire Anadarko Petroleum Corporation, it has entered into a binding agreement to sell Anadarko’s Algeria, Ghana, Mozambique and South Africa assets to Total S.A. (NYSE: TOT) for $8.8 billion.

The sale is contingent upon Occidental entering into and completing its proposal to acquire Anadarko, and would be expected to close simultaneously or as soon as reasonably practicable afterwards. The assets to be sold to Total represent approximately 6% of the expected net production and approximately 7% of the cash flow after capital expenditures of Occidental in 2020 pro forma for the acquisition of Anadarko.

The proceeds of the sale would fund part of the acquisition, as would Buffett’s investment.

Both Chevron and Occidental see multi-billion dollar synergies in this deal. Rystad Energy recently noted that Andarko’s Permian wells produce less oil and gas per-foot drilled than either Chevron or Occidental. Both companies believe they can substantially improve on the performance of these wells.

As someone who has recommended Chevron to investors many times, I hope they don’t get involved in a bidding war. There is no question they could outbid Occidental on the deal, but that would consume a large portion of the synergies. Further, if Anadarko decides to walk away from the Chevron offer, they will owe Chevron $1 billion as a breakup fee.

At this point, I am leaning toward Occidental winning this bidding war. I think Occidental shareholders will be the biggest losers, while Anadarko is a winner in every scenario. But if Occidental does win out, then not only are Chevron shares currently discounted, but the company will get a $1 billion windfall for being rejected.

If you’re looking for your own financial windfall, turn to my colleague Jim Fink.

Jim Fink is chief investment strategist of Options for Income and Velocity Trader. Over his many years in the trenches of Wall Street, Jim has perfected a system that turns even small stock movements into market-thumping gains.

Now Jim wants to share how his proprietary system works… at the Ultimate Profits Summit, scheduled for May 9 at 1:00 p.m. During this free online event, Jim will show you, step-by-step, how his new system pinpoints four types of trades that could hand you gains of 114%, 211%, 246% and 433%. Sometimes in as little as 36 hours.

Spaces are limited. Reserve your spot by clicking here now.