The Unknown Unknowns And Your Finances

My wife and I have been watching the new HBO miniseries on the 1986 Chernobyl nuclear disaster in then-Soviet Russia. It’s riveting television and closely adheres to actual events.

The Chernobyl accident was the most disastrous nuclear power plant accident in history. The reactor explosion spewed deadly plumes of radioactivity throughout Europe and the USSR. The financial and human costs remain incalculable.

Chernobyl’s clean-up expenditures and economic damage ran into the hundreds of billions of dollars. The number of immediate human casualties was about 50, but deaths are estimated to eventually total many thousands, as radiation-caused cancer fatalities become apparent.

During the second episode of this HBO miniseries, my wife asked me the question that is probably on everyone’s minds as they watch the drama unfold: “Could a Chernobyl-type event happen today?”

I told her “No, I don’t believe that’s possible.” However, it’s important to note that we never dreamed such an accident was possible in the first place. So, let’s explore the question in more depth. Therein you’ll find timeless lessons for your personal finances.

When nuclear power was first commercialized in the mid-1950s, many viewed it as an ideal solution for the electricity needs of a growing global population. One pound of uranium-235 can produce two to three million times as much electricity as one pound of coal or oil, but without producing any direct atmospheric emissions under normal operations.

But then a couple of accidents in the 1970s and 1980s seriously damaged enthusiasm for nuclear power. The Three Mile Island accident in Pennsylvania in 1979 remains the most serious nuclear power accident in U.S. history. There weren’t any injuries as a result of this accident, but there was a small release of radioactive material and a full-blown calamity was narrowly averted.

The Three Mile Island accident highlighted the special risks associated with nuclear power and crystallized a growing “no nukes” movement in the U.S.

Three Mile Island was a minor event compared to what came next.

As an engineer in the energy industry, a major focus of mine has always been on safety during all phases of design, construction, and operation. I’ve spent a lot of time reviewing what went wrong during major disasters such as Chernobyl, the 2010 Deepwater Horizon oil spill in the Gulf of Mexico, and the 2011 Fukushima Daiichi nuclear meltdown in Japan.

From an engineer’s perspective, it is important to recognize both risk and the consequences of risk. In both the Chernobyl and Fukushima nuclear accidents, risks weren’t recognized and consequences weren’t properly estimated.

An investor in the 1980s could have been forgiven for investing aggressively in the nuclear industry. After all, prior to Chernobyl the growth outlook was impressive: 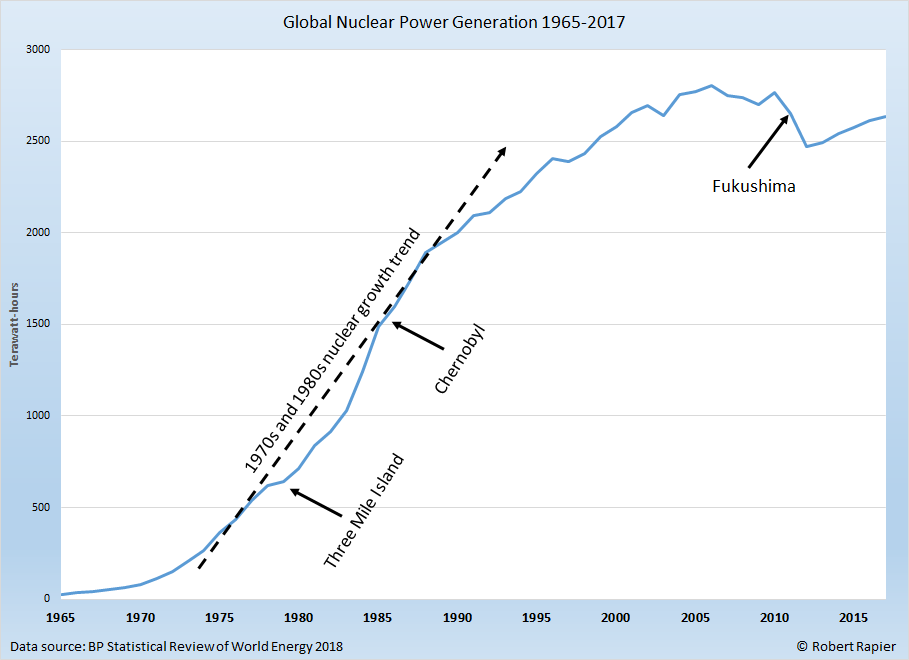 In my view, the probability of a similar set of events leading to similar outcomes has been reduced to zero, when it comes to Chernobyl and Fukushima-type events. The causes were identified and addressed in other plants with those designs.

But bear in mind that nobody had any idea that such huge disasters were possible for either of these locations. Indeed, it took years to fully understand what had precisely caused the accident at Chernobyl.

As someone who has been involved in many safety reviews and incident investigations, what always concerned me more than anything were the things we might have missed.

In 2002, Defense Secretary Donald Rumsfeld made the following observation:

Chernobyl was caused by one of these unknown unknowns. This is partially true for Fukushima as well, but at least in that case the causes were understood. They were just deemed to be highly unlikely, such as the possibility that a tsunami could breach the plant’s 33-foot tall seawall.

But what does this have to do with finance? There are two lessons here.

First, regardless of how bright the outlook may be for a specific sector, events could happen that derail that sector. That happened with nuclear power. It also happened with coal, as governments around the world began to pass laws phasing out coal. I don’t think it’s likely to happen anytime soon with oil, but a lesson from Chernobyl is to prepare for the unexpected. You can do that by ensuring that your portfolio is properly diversified.

The second lesson concerns the unknown unknowns. There are potential financial risks in your life. How are you preparing for them? Is your family financially prepared for a sudden health crisis? Loss of a job? There are outcomes for which we can plan and prepare, even if we can’t identify a possible reason for that outcome.

Maintaining an appropriate liquid emergency fund could buffer you against all sorts of unknown unknowns. Possessing sufficient life insurance or making other suitable arrangements can ensure that your family’s finances aren’t destroyed if something tragic happened to you.

That’s why there are financial rules of thumb. We should all do some planning against those unknown unknowns that could lead us to financial disaster.