But here’s the real danger of headline risk: Your own reaction.

Investors tend to get rattled by lurid news reports, prompting them to make impulsive and emotion-driven decisions. After all, the stock market is governed by crowd psychology. Below, I’ll show you how to cope with headline risk and the best steps to take now, with emphasis on the three most appealing sectors.

It’s undeniable that Wall Street has been on a roller coaster. Investors initially gave a sigh of relief this week, after the Trump administration temporarily relaxed curbs against Chinese telecom Huawei Technologies. Trade anxieties quickly resumed, though, after reports surfaced on May 21 that the White House is considering sanctions on Chinese video surveillance firm Hikvision.

U.S. efforts to blacklist Chinese technology firms are fueling fears that this trade war will continue not for months but for years, as America seeks to counter China’s long-term ambitions to achieve technological supremacy. The U.S. is especially worried that China wants to dominate 5G, the next generation of wireless technology.

The protectionists in Trump’s orbit are convinced that China is flouting trade rules for more than economic advantage — they accuse the world’s second-largest economy of illegally seeking military and strategic dominance. These trade hawks allege that China is trying to surpass the U.S. through corporate espionage, intellectual property theft, and unfair industrial “off-sets” that require firms to relinquish proprietary tech in return for doing business with China.

Some of these accusations have merit. Problem is, China and America benefit from close ties and cooperation. This synergistic relationship, often referred to as “Chimerica,” would unravel in a full-blown trade war and weigh on global economic growth. History also tells us that tariffs never work.

Citing the trade war as the key culprit, the Organisation for Economic Co-operation and Development (OECD) slashed its growth forecast for 2019 in the latest edition of its bi-annual Economic Outlook, published on May 22. As the chart shows, the estimated pain from the trade war is significant: 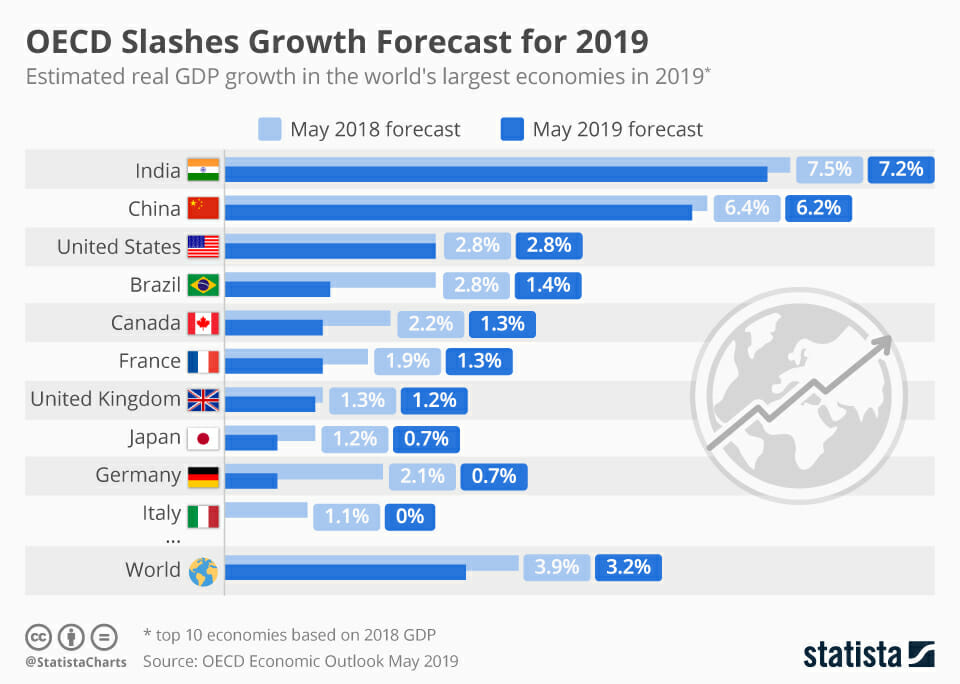 “Looking ahead, trade tensions are not only hurting the short-term outlook but also medium-term prospects, calling for urgent government action to reinvigorate growth. The global economy was expanding in sync less than two years ago, but challenges to existing trade relationships and the multilateral rules-based trade system have now derailed global growth by raising uncertainty that is depressing investment and trade. The post-World War II process of globalisation driven by multilateral agreements that allowed ever-increasing trade openness is being challenged.”

New data released today seem to confirm the OECD’s warning. Research firm IHS Markit reported that its Purchasing Managers Index, which gauges activity in the manufacturing and services sectors, shows the euro zone economy is further slipping into contraction. Most of the blame was placed on tariffs. 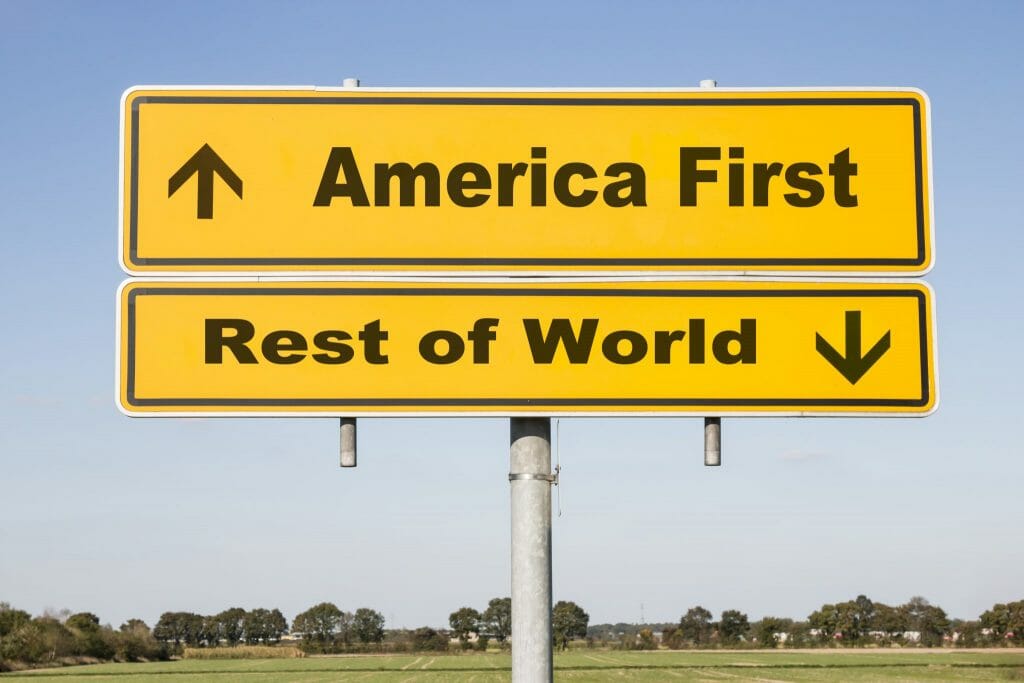 U.S. tariffs against China amount to a cry of: “Stop me, before I shoot myself in the foot again.” American unilateralism is a major risk for businesses, consumers and investors.

Trump claims that China pays tariffs into the U.S. Treasury. This assertion is completely false. Companies pay them. The net effect of tariffs is higher prices for retailers and consumers.

U.S. consumers will pay dearly for the Trump administration’s 25% tariffs on Chinese imports. The move eventually translates into a $2,200 tax increase for an American family of three, because the tariffs would apply to most consumer goods, according to a report released on May 14 by the Peterson Institute for International Economics.

The figure would more than eliminate the roughly $800 tax savings that middle-income families received from the GOP-backed 2017 tax overhaul.

How to Position Your Portfolio

Triggers for a correction lurk everywhere. The latter part of 2018 was ugly for investors and further sell-offs are likely this year. “Story stocks” in the tech sector are among the most vulnerable.

During this protracted bull market, many investors have grown complacent. When volatility returns, they’ll get taken by surprise and run for the exits.

Overvalued momentum stocks, especially the mega-cap technology stars, are losing steam. They’re ceding their leadership position to stocks in sectors more appropriate for the late stage of a recovery, such as energy, defense, and health services. These are the sectors you should emphasize in the coming months. Let’s take a look at all three.

The share prices of several oil producers haven’t experienced a rise that’s proportionate with the resurgence this year in crude prices (see chart, compiled with data from the U.S. Energy Information Administration). West Texas Intermediate, the U.S. benchmark, hovers at $60 per barrel. Brent North Sea crude, on which international oils are priced, hovers at $69/bbl. 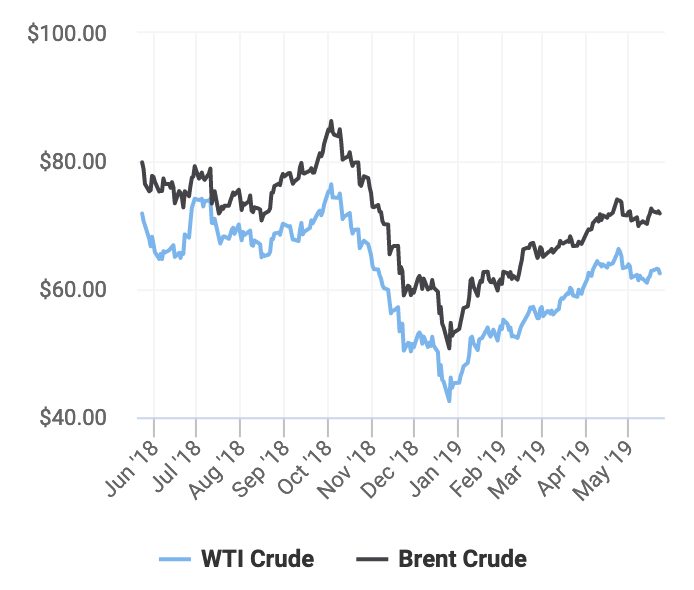 The breakeven cost of oil production in the Permian, in the southwestern U.S., is comparatively low, making acreage there a prize for the major energy players. Merger and acquisition activity in the Permian is picking up; buyout targets are poised to richly reward investors.

Saber-rattling this month between the U.S. and Iran is a reminder that geopolitical tensions are running high — and that’s always a boon for the makers of weapons.

President Trump has stocked his administration with personnel who are extremely hawkish, notably National Security Adviser John Bolton, who is a major proponent of going to war against Iran. Bolton also is taking an aggressive stance toward North Korea and Venezuela.

The totalitarian state of North Korea recently resumed missile tests and major oil producer Venezuela is sinking into a morass of social unrest, political repression, and economic chaos. When the world is on edge, military budgets go up.

Read This Story: From Trade Wars to Shooting Wars

Sane human beings hate war, but expanding expenditures on aerospace/defense mark a huge, multi-year growth opportunity for investors. Is vast military spending beneficial for the human race and the planet? The question is beside the point. Huge military budgets are integral to job and wealth creation in national economies. For better or worse, the trend is unstoppable.

As the U.S. economy enters the late stages of recovery, a likely recession awaits around the corner. On average since World War II, economic recoveries have lasted about eight years. The current recovery is in its 10th year. Defense contractors, however, tend to be recession resistant.

Another unstoppable, recession-resistant sector you should consider now is health services. For investors, the vast health services sector is a relentless moneymaking machine, regardless of who controls Congress or occupies the White House.

People in developing and developed countries alike are aging, demanding rising levels of care. In developing nations, emerging middle classes are growing more affluent and embracing Western eating habits and lifestyles that boost the occurrence of illness and disease. As they get older, fatter and sicker, these people are clamoring for the expensive, high-tech medical care they see in America.

As a whole, the stocks of health care insurers, providers and device makers, as well as drug makers, are poised for outsized gains.

The above three sectors aren’t immune to volatility (especially energy), but this year they’re likely to transcend the daily media madness. In the case of aerospace/defense, reports of geopolitical tensions are actually beneficial.

So the next time a news report sends waves of fear-induced adrenaline through your body, turn off the TV. Go for a walk. Play with your kids. Just don’t make an investment decision based on the hyperbole of a breathless news anchor.

As the Brits said during the darkest days of World War II: “Keep Calm and Carry On.” And let the record show, Britain eventually won.

Questions about headline risk? Drop me a line: mailbag@investingdaily.com