China is finally playing its Trump card, so to speak.

In an editorial published in the People’s Daily earlier this week, China threatened to retaliate against U.S. trade tariffs by withholding rare earth metals from American manufacturers. Those materials are used in the production of smartphones, electric vehicles, and sophisticated military weapons.

It is no coincidence that China chose rare earth metals as its weapon of choice in the trade war. The industries affected are among the largest U.S. manufacturing exporters.

Investors take heed: the trade war has taken a serious turn for the worse. If you still don’t believe the trade war with China is real, consider these three examples of how the stock market is reacting:

Adhering to its usual “forward looking” dynamic, the stock market has been anticipating this development since trade tensions escalated in early May. Nine months ago, the Pentagon notified Congress of its dependence on rare earth metals. Looks like someone on Wall Street was paying attention.

The Pentagon has been stockpiling rare earth metals for years. That’s why the share prices of U.S. weapon manufacturers such as Raytheon (NYSE: RTN), Lockheed Martin (NYSE: LMT), and Martin Marietta (NYSE: MLM) have held steady over the past month.

Unfortunately for Apple, its ideological opposition to mining may have left the company ill-prepared for the impending boycott. Also, Apple CEO Tim Cook’s chummy relationship with President Trump won’t make it any easier for him to source those materials from alternative suppliers that wish to remain in China’s good graces.

The problem is less intractable for General Motors. GM sold only 200,000 EVs in the United States last year out of more than 17 million vehicle sales. If necessary, GM can delay ramping up EV production until the trade war with China has abated. 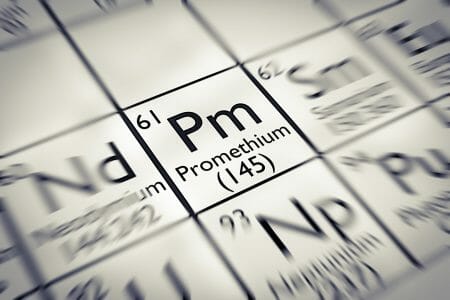 Unlike petroleum reserves, which are plentiful around the world, rare earth elements are only found in abundance in a few regions of the world, including China. Although China is bereft of other natural resources compared to its size, it controls roughly 80% of the world’s rare earth metals supply. That makes China the OPEC of rare earth metals in terms of its ability to limit supply on short notice.

China has held off playing its Trump card… until now. Keeping rare earth metals out of the hands of companies like Apple and GM is a direct attack on two of America’s most important manufacturing sectors.

Like many investors, you probably feel beaten down by this U.S.-China trade war and its seemingly endless round of tit-for-tat tariffs. Well, I have good news for you: my colleague Jim Fink has devised a trading system that racks up market-beating gains, regardless of trade tensions or economic ups and downs.

A seasoned veteran of Wall Street, Jim is the chief investment strategist of the premium advisory service, Velocity Trader. Three years ago, Jim launched his proprietary trading system, called the Velocity Profit Multiplier (VPM). The product of painstaking trial and error, the VPM can predict when a stock is about to rise, or fall, with remarkable precision.

Jim now tells me that his VPM has hit on a trade that could generate up to 172% in quick profits. Want to get in on the action? Click here for full details.