Marijuana Investing: This Bud’s For You

I’ve written scores of articles over the years about the marijuana industry, so it didn’t come as a complete surprise when my colleague Jim Pearce, chief investment strategist of Personal Finance, asked to interview me about pot stocks.

Personal Finance is our flagship publication and Jim is a seasoned analyst. From time to time, Jim is asked by his readers to recommend marijuana stocks, but he’ll be the first to tell you that there’s a lot of hyperbole surrounding these investments. It’s tough to find the right choices.

To help you pick the genuine money-making opportunities in “canna-business,” Jim and I sat down for a one-on-one interview.

Jim Pearce: Is the marijuana “green rush” really a long-term bonanza or just a fad?

John Persinos: Oh, it’s real alright! Once a symbol of counter-culture rebellion, marijuana has evolved into a multi-billion-dollar industry. “Mary Jane” has moved from Woodstock to Wall Street, representing a disruptive force for a slew of industries, including pharmaceutical, tobacco and beverage companies.

The accelerating legalization of marijuana, and its concomitant growth as an industry, is one of the greatest investment mega-trends that we’ll see in our lifetimes. The potential profits are vast. Investors who jumped onto the bandwagon early are already getting rich. It’s like investing in the liquor industry in the 1930s, when Prohibition ended. Or investing in the nascent oil industry in the late 19th century, when John D. Rockefeller was amassing his vast fortune.

Recreational use of marijuana has become a mainstream pastime. In many cities throughout North America, you can stroll into a marijuana dispensary and casually buy pot as easily as you can buy a pack of chewing gum.

It’s not just about getting high, though. The consensus in the medical community is that marijuana possesses enormous healing properties.

To be sure, high-flying marijuana stocks underwent a correction in late 2019, but they’re now bouncing back. Marijuana equities were inflated and formed a bubble; the bursting of the bubble was inevitable. A lot of thinly capitalized stocks fell by the wayside.

This year, the coronavirus pandemic has generated enormous demand for marijuana. Many states and localities have deemed marijuana producers and providers as “essential services” and allowed them to stay open during lockdowns.

There’s still ample reason for investors to be bullish about small, fledgling marijuana companies. In fact, small-cap stocks will offer the most explosive gains in the marijuana industry. Not only do these companies give investors opportunities to get in at bargain prices and speculate on skyrocketing cannabis success, but they also make great takeover targets for Big Pharma companies looking to break into this still-young industry.

Why are so many marijuana companies based in Canada?

When it comes to legalized marijuana, Canada is in the vanguard. Our neighbors to the north have always had a permissive and tolerant society. This attitude has extended to marijuana.

In October 2018, Canada legalized on the federal level the possession and use of recreational marijuana. Canada was the first G7 nation to take this bold step and it triggered an earthquake in the worldwide marijuana industry.

In the U.S., 11 states and the District of Columbia have full marijuana legalization, and another 33 states plus DC permit medicinal uses with permission from a doctor. Pot remains illegal at the federal level, but that may soon change, as the normalization of marijuana in our country continues apace (see the following chart). 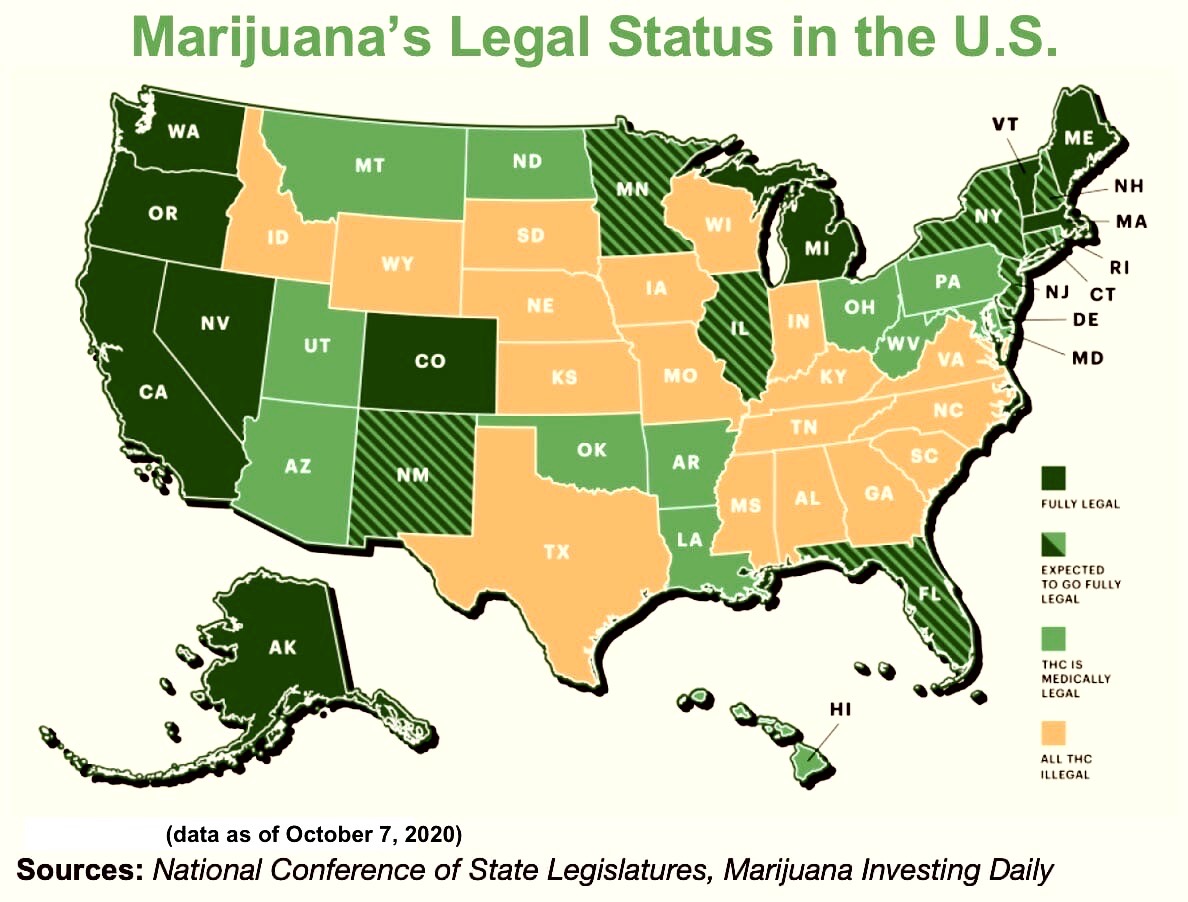 The House of Representatives in late September passed a standalone marijuana banking reform bill, an historic first. The bill would protect banks that service the cannabis industry from being penalized by federal regulators.

Read This Story: Marijuana News Update: The Week in Weed

Called the Secure And Fair Enforcement (SAFE) Banking Act, the legislation seeks to expedite the provision of financial services to cannabis companies by removing the fear of potential federal action against lenders. Many banks are reluctant to lend to marijuana businesses because of uncertainty over the industry’s legal status. The bill moved to the Senate, where chances of passage are good. President Trump has not indicated whether he would sign it.

Although consumed with the pressures of the pandemic and the November elections, Congress is evaluating several other pieces of marijuana legislation, including the Marijuana Opportunity Reinvestment and Expungement (MORE) Act, which would federally deschedule cannabis and expunge the records of those with previous marijuana convictions.

What category of marijuana company do you think stands the best chance of survival?

I foresee continued consolidation. Weak companies will go bankrupt and disappear altogether. Other companies that provide a valuable product or service but lack a competitive edge will get acquired. We’re already seeing a flurry of merger and acquisition activity among marijuana companies.

Avoid companies that provide the marijuana plant as just a commodity. Growing a marijuana plant isn’t a unique capability; those firms involved in tasks that are easily replicated will suffer from “commoditization” and a downward pressure on prices.

The marijuana retail dispensary market is attractive but it’s getting more competitive, as cannabis becomes a legal and routinely available product. Marijuana has gone from counter-culture to consumer culture. The strongest dispensaries will be those that are cobbling together vertically integrated operations, from growing the plant, to producing a “value add,” to marketing it via dispensaries.

Read This Story: Mainstream Marijuana: Why Dispensaries Are Key

Other survivors will be biotech companies with sufficient capital and research talent to produce effective cannabis-based medicines. For conditions ranging from epilepsy to multiple sclerosis, to glaucoma, to even cancer, compounds derived from the plant are achieving remarkable results when conventional therapies can’t.

What other risks threaten the marijuana industry?

Increasing numbers of states are legalizing pot, but Uncle Sam still bans it at the federal level. The feds have left it to the states to come up with their own laws regarding pot, which has created a crazy quilt of regulations.

What’s more, the Trump administration remains avowedly anti-pot. A change in the regulatory climate could clobber marijuana companies. But I don’t see that happening.

The normalization of marijuana laws represents an unstoppable trend. States and localities are becoming addicted to the tax revenue from pot and Congress knows this fact of life. Most lawmakers don’t want to end the tax revenue gravy train.