How to Trade in the New Era of Chaos

The markets have been rising and falling according to the pronouncements of trade negotiators or the Federal Reserve. An encouraging White House press release about tariffs, or a dovish remark on interest rates from Fed Chair Jerome Powell, sends stocks shooting higher. A belligerent tweet or off-handed remark from President Trump sends stocks plunging down.

The stock market has been manically reflexive to each whiff of good or bad news, whether it’s about China, Mexico or interest rates. That’s a warning sign. Healthy markets take the stairs; worried markets use the elevator.

Look, it doesn’t matter whether you love or hate President Trump. Nor does it matter whether you think tariffs are effective or not. Here’s the upshot, and it applies to Democrats and Republicans alike: Chaos is the new normal. Below, I’ll show you the best ways to trade in this highly fraught environment.

For starters, you must accept the fact that tariffs are real, not mere rhetoric. They’re already wreaking damage to the global economy and financial markets. One consequence we’re seeing is a hit on corporate earnings.

For the first quarter, many S&P 500 firms reported a slowdown in earnings growth, citing the trade war as the chief culprit. For the second quarter, analysts already are lowering their estimates for earnings per share growth, largely because of tariffs.

Stocks received a jolt of adrenaline this week on suggestions from Powell that the Fed would cut interest rates if it appeared that the trade war would hurt the economy.

But then stocks took a hit, when Trump declared on Twitter that Mexico wasn’t doing enough to curb illegal immigration into the U.S. Accordingly, hopes faded for a Mexico trade deal and stocks headed down. But hold the smartphone! Stocks shot back up, when another Trump tweet indicated that he might delay punishing Mexico.

The U.S. Labor Department reported today that nonfarm payrolls for May increased by just 75,000, far worse than the gain of 180,000 expected by economists. The unemployment rate remained unchanged at 3.6%, a 50-year low.

And yet, as of this writing on Friday morning, the three major U.S. stock indices were trading higher. Investors believe that the downbeat jobs report strengthens the case for a Fed interest rate cut to stimulate the economy.

The roller-coaster action on Wall Street is enough to make investors reach for the Dramamine. But buckle up for a long ride.

You ignore the trade war at your peril. History shows that shooting wars usually start with harsh words; tariff taunts could easily get out of hand.

Tensions between the world’s two largest economies were heightened yesterday by reports that the U.S. is getting ready to sell more than $2 billion worth of tanks and weapons to China’s bitter rival Taiwan. China warned of “serious harm” if the sale goes through.

In a press conference on Thursday, Trump threatened to hit China with tariffs on “at least” another $300 billion worth of Chinese goods, spooking investors who were just starting to feel good about the dovish Federal Reserve. No trade negotiations with China have taken place since May 10, the day Trump sharply hiked tariffs on a $200 billion list of Chinese goods to 25%.

Beijing promptly retaliated by threatening a black list of U.S. tech firms… and so it goes.

Export-dependent multinationals have been the most vulnerable to the fickle winds of trade war. Their stocks have served as barometers of progress, or lack thereof, in trade talks. That’s not surprising, given the stakes involved for the sector (see chart, compiled with data from the Peterson Institute of International Economics): 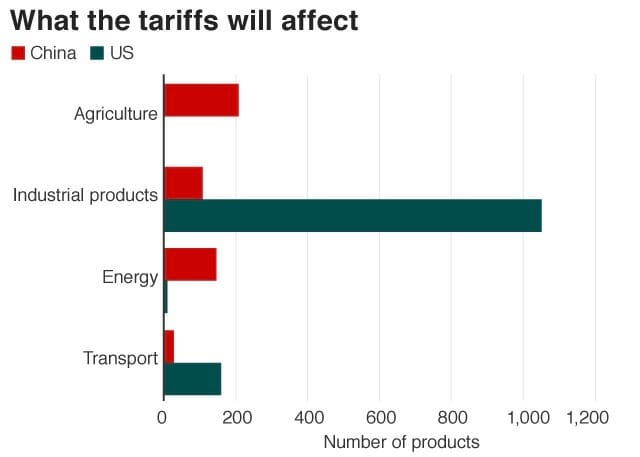 Chinese rare earth prices are soaring beyond multi-year highs, as the country weaponizes these elements in its trade battle with America. China has threatened to curtail its exports of rare earth metals that are vital for products in key industries, such as aerospace, high technology, automobiles, and energy. America’s national security depends on rare earth metals and China is by far the world’s largest producer of them.

In the energy patch, the prevailing mood has swung from bullish to bearish. Crude oil prices have fallen more than 20% since late April, because of increasing concerns about global economic growth.

The following chart, compiled with data from the U.S. Energy Information Administration, shows the volatility and overall slump in prices for U.S. benchmark West Texas Intermediate (WTI) and international benchmark Brent North Sea crude, over the past three months: 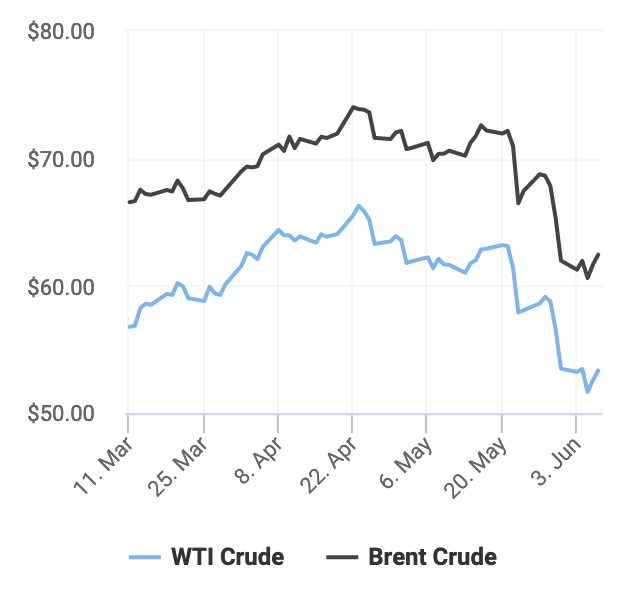 Oil prices just racked up their worst four-week run since the 2008 financial crisis. Prices for other commodities, notably copper, have declined as well. Because of its wide applicability across industries, copper is considered a leading indicator. These economic fears are driving down yields on Treasury notes and bonds. Today’s worse-than-expected jobs report is yet more evidence that a downturn is looming.

Meanwhile, Brexit continues to descend into farce. Britain faces an October 31 deadline to devise a plan for its departure from the European Union, but political disarray in the UK is preventing resolution.

Market volatility is back with a vengeance. Sure, options traders love volatility, but it causes agita for average individual investors.

There’s one more troubling sign, indicating that the current expansion, now more than a decade old, might soon be coming to an end: the (partially) inverted yield curve. Over the past 60 years, every U.S. recession was preceded by a negative term spread, that is, an inverted yield curve.

When investors get worried that markets and the economy could be vulnerable, they tend to gravitate to long-term bonds, sending prices higher and yields lower.

The future is growing increasingly uncertain, but one of the surest ways to make money is to invest in unstoppable trends largely immune to headline risk. I’ve pinpointed six trends that should withstand this prolonged period of uncertainty:

1.) Medical information technology. In the booming health care field, cost containment is the name of the game. Federal and state regulators increasingly mandate the use of information technology to digitize and analyze patient records. Software firms in this space enjoy long-term tailwinds.

2.) Industrial robotics/automation. Increasingly integrated with artificial intelligence, robotics/automation is permeating a wide variety of industries. Notably, retail giants such as Amazon (NSDQ: AMZN) and Wal-Mart (NYSE: WMT) are automating their distribution capabilities, as e-commerce grows in emerging markets and supply chains get stretched.

4.) Technology for 3D-sensing. Makers of chips and other components that support three-dimensional sensors embedded in smartphones face growing demand. These capabilities are crucial to the exploding field of virtual/augmented reality, which is migrating beyond video games and into commercial applications.

Chipmaker stocks have gotten clobbered lately because of trade sanctions against the sector, but when the tariffs eventually end, these beaten-down stocks should swing sharply higher.

5.) Aerospace/defense innovators. Rising geopolitical tensions are fueling greater Pentagon expenditures. However, the mega-caps are overvalued and vulnerable to trade risk. Better bets are smaller defense firms that specialize in “next-generation” electronics that integrate weapons systems within the Internet of Things.

6.) Immunological treatments. Immunotherapy is a hot area, as researchers try to find a way to get the body to fight cancer by itself, eliminating the need for costly and painful techniques such as chemotherapy and radiation. Small biotechs with new immunotherapy drugs in the pipeline are poised for big gains.

Bet on mega-trends with sustainable momentum. That way, you won’t have to sweat the market’s temporary ups-and-downs.

Questions about the hottest investment trends? Drop me a line: mailbag@investingdaily.com