Among the most pleasant memories of my Baby Boomer childhood are the Warner Brothers cartoons that played on television every Saturday morning. Our TV set had rabbit-ear antennae and only three channels.

Particularly beloved was Wile E. Coyote. In frantic pursuit of the Road Runner, the hapless predator would run straight off a cliff and continue to pump his legs in midair…until he glanced around, gulped, and plummeted into the canyon.

Likewise, the overbought stock market has continued to defy gravity. But maybe not for long. In a research report dated June 10, analysts at Citigroup (NYSE: C) warned that the Trump administration’s persistent trade disputes could plunge stocks into a “full-scale bear market” before the year is over.

That said, the Dow Jones Industrial Average, S&P 500 and tech-heavy Nasdaq have enjoyed a multi-day surge, as the major indices continue to “climb a wall of worry.”

As of this writing on Tuesday morning, the three major U.S. stock indices were trading higher, extending the gains of the last few days. The Dow was heading for a seven-day winning streak, although stocks lost momentum and struggled to gain traction as the day wore on.

Wall Street is betting that President Trump’s trade rhetoric is more bark than bite. To my mind, that’s a risky bet, because international tensions can easily spiral out of control. But for now, the bulls are in charge.

Investors are pleased that Trump abandoned his plans to slap 5% tariffs on Mexico. Meanwhile, the White House appears to be coaxing China to the bargaining table. Trump and Chinese leader Xi Jinping are scheduled to meet at the G-20 Summit on June 28-29, in Osaka, Japan. Hopes are high that the world’s two largest economies will resolve their differences on trade. But those hopes could get dashed.

Trump said Monday that if Xi skips the G-20 meeting, the U.S. would impose tariffs on another $300 billion on Chinese goods. Markets would likely tumble as a result. Trump also attacked China’s trade policies and reiterated his belief that tariffs work. As I’ve repeatedly warned my readers, protectionism will persist until the 2020 elections and perhaps beyond.

Economic growth is showing signs of fatigue, but paradoxically, this trend is cheering investors. Wall Street has migrated from fears of excessive monetary tightening to hopes of an interest rate cut. The Federal Reserve’s policy-making Federal Open Market Committee is scheduled to meet June 18-19, at which time it might decide to cut rates to stimulate the economy.

It seems that reports of Goldilocks’ demise were premature, as economic growth stays not-too-hot, not-too-cold. Inflation remains muted enough to give the Fed flexibility to cut rates. As erratic economic and trade policy threaten the markets, traders are counting on the Fed to ride to the rescue.

And yet, despite recent sell-offs, stocks remain excessively valued. Take a look at this chart, which depicts the cyclically adjusted price-to-earnings ratio (CAPE).

The influential Professor Robert Shiller of Yale University invented the CAPE ratio (also known as the Shiller P/E) to provide a deeper context for market valuation.

The CAPE ratio is defined as price divided by the average of 10 years of earnings (moving average), adjusted for inflation. The ratio now stands at 29.8, which is 89.8% higher than the historical mean of 15.7. Notice the parallel between today and Black Tuesday in 1929. It wouldn’t take much to send overvalued stocks tumbling.

Research firm FactSet this month compiled a Geographic Revenue Exposure report, based on the most recently reported fiscal year data for each company in the S&P 500 index.

For this analysis, FactSet divided the S&P 500 into two groups: companies that generate more than 50% of sales inside the U.S. (less global exposure) and companies that generate less than 50% of sales inside the U.S. (more global exposure). Aggregate earnings and revenue growth rates were then calculated based on these two groups. 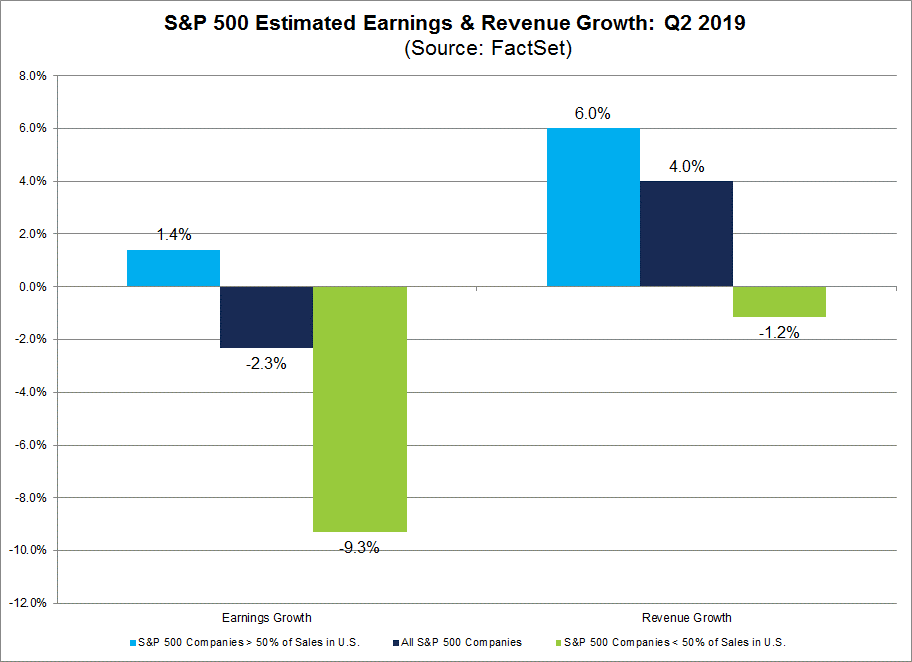 In the past, investors have consoled themselves by assuming that most of Trump’s tariff threats have been negotiating tactics to intimidate trading partners into making concessions. This self-delusion is giving way to the realization that U.S. tariffs are real and destructive, as several corporations report that tariffs are squeezing profit margins.

To protect your portfolio from rising dangers while simultaneously tapping growth, you should focus on stocks that perform well during the late stage of a recovery, notably consumer staples, utilities, energy, and health services. These sectors also are less vulnerable to trade war.

You should elevate cash levels and consider inflation-linked hedges such as commodities and hard assets. Inflation seems tame now, but historically low unemployment could ignite wage growth down the road. The time to buy inflation hedges is now, before the rest of the herd starts bidding up their prices.

I also suggest that you invest in recession-resistant industries that are on track to post multi-year growth, regardless of the economic cycle. Case in point: aerospace/defense.

This weekend’s surprise announcement of a merger between missile systems maker Raytheon (NYSE: RTN) and industrial conglomerate United Technologies (NYSE: UTX) will create Raytheon Technologies, an aerospace/defense behemoth second in size only to Boeing (NYSE: BA) in the U.S. and roughly tied for third in the world with European-based Airbus (OTC: EADSY).

Read my June 7 story: The Great Game: Geopolitics and Your Portfolio

The merged Raytheon/United Technologies entity will largely be a supplier company, creating products and technologies for other companies’ platforms. Consolidation continues apace in aerospace/defense, as companies seek economies of scale, expanded customer bases, and the proprietary technologies of rivals. Rising defense budgets bode well for defense contractors of all sizes.

Raytheon’s dominant position in the drone manufacturing industry is especially valuable to UTX. The merger highlights the appeal of aerospace/defense as a growth play that also hedges your portfolio.

A shrewd investment strategy is to pinpoint likely takeover targets, a task that Investing Daily’s strategists continually undertake for their readers.

The long-suffering coyote of cartoon lore didn’t realize he was poised for a fall, until it was too late. As with the laws of gravity, the laws of finance are immutable. Take action now to shore up your portfolio.

“How worried should I be about inflation’s effect on stocks?” — Mike R.

Inflation appears subdued, for now. Keep an eye on the latest consumer price index report, scheduled for release tomorrow. Several underlying factors, chief among them tariffs, have planted the seeds of greater inflation.

Questions about the latest risks to your portfolio? Drop me a line: mailbag@investingdaily.com