How to Swim With the Sharks

President Donald Trump’s controversial pardons this week of several high-profile men convicted of white collar crimes have brought the topic of financial wrongdoing to the fore.

Whether you think the pardons were justified or not is besides the point. The fact remains that the investing world is bedeviled by a growing number of criminal con men.

No one knows this better than my colleague Jimmy Butts, chief investment strategist of the premium trading service Top Stock Advisor. As he works in a brutally competitive environment to make an honest buck for his followers, Jimmy has witnessed all manner of shenanigans.

But Jimmy has found a way to fight back. He has devised an ingenious investment system that outwits the sharks of Wall Street and shifts the odds back in your favor.

For this week’s Big Interview, I sat down with Jimmy [pictured here] to discuss his investment strategy and other issues of timely importance to investors. 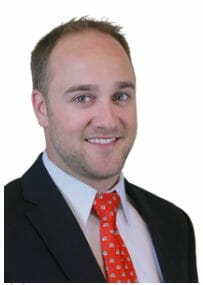 As I’ve written in recent Mind Over Markets columns, amoral scamsters continue to fleece individual investors and rig the market.

We face a tumultuous time in the stock market. Decisions affecting millions of investors are being made by market manipulators with huge financial and political power at their disposal. Tariffs, interest rates, mergers…they’re getting implemented by a small interconnected circle of insiders in Washington and on Wall Street.

Indeed, the predictable rise and fall of stocks based on White House announcements about Sino-American trade policy has raised the issue of illegal insider trading.

News reports have surfaced that a secretive group of futures traders may have generated $3.5 billion in profits off stock plays timed to tweets and statements about the trade war. Members of the House of Representatives have urged federal regulators to investigate.

In this murky environment, how can the little guy stand a chance? I asked Jimmy Butts.

John Persinos: How have the major players on Wall Street rigged the game against individual investors?

In his book about the 2008 financial collapse, The Big Short: Inside the Doomsday Machine, Michael Lewis talks about two young gentlemen, Ben and Charlie, who were trying to buy credit defaults swaps on subprime mortgage loans. In other words, they were shorting the looming housing collapse.

Ben and Charlie struggled to get any traction with the big Wall Street institutions. They had no clout on Wall Street, they weren’t large institutional players, they were just two guys who happened to stumble into this opportunity.

They “only” had $30 million and Wall Street wouldn’t give them the time of day. Ben and Charlie got the runaround, they got stepped on, and they were treated like lower class citizens. Wall Street called their firm, “Cornhole Capital.” Their little firm’s real name was Cornwall Capital.

The point is that if a small firm with “only” $30 million gets treated like this and doesn’t get access to the same information, pricing, and data as the big players, then how do you think regular folks like you and me get treated?

And yet, it seems that regulators such as the SEC are taking a hands-off approach, just when more oversight is needed.

Yes and no. The problem with the SEC is that they are greatly undermanned. There’s too much power money and too many problems for them to combat them all. They have to pick and choose, and investigations can take years. By that time whatever headline grabbing crime they are looking into is forgotten about by the general public.

The SEC is in an uphill battle fighting an organization that has more money and is more powerful than them. They have a tough job to do.

Discuss for our readers your investment strategy. You’ve often said that some of your biggest winners are what you call “no-brainers”. Everybody’s heard of them, but nobody really owns them. Why do you think that is the case?

I find this to be a common theme among most individual investors, and it’s unfortunate. I think a lot of it comes from the idea that you need to invest in the next big thing, like Alphabet (NSDQ: GOOGL) or Amazon (NSDQ: AMZN), before they become household names. As this is the only way you’ll be able to “beat” Wall Street at its own game.

But what most find is that’s easier said than done. Of course, we would like to get in on Facebook (NSDQ: FB) or Microsoft (NSDQ: MSFT) at the ground floor, but that’s a difficult task.

When I talk with most folks about investing they ask me about investing in cryptocurrency, or pot stocks, or penny stocks. They are probing for a stock that they can invest in and then retire on.

Unfortunately, I don’t have the answer they are looking for. When I bring up some of our best-performing stocks like Intel (NSDQ: INTC), CME Group (NSDQ: CME), or even PayPal (NSDQ: PYPL) where we’ve generated triple-digits returns, their eyes usually glaze over. Those aren’t “sexy” enough for them.

But investing doesn’t have to be sexy. A great way to build wealth (while getting a good’s night rest) is to buy wonderful companies at fair prices and watch the returns pile in.

Do you see Warren Buffett investing in penny stocks? Did he invest in some no-name companies when he started out? No. He invested in Coca-Cola (NYSE: KO), American Express (NYSE: AXP), and Geico, the latter now being a wholly owned subsidiary of Buffett’s Berkshire Hathaway (NYSE: BRK.A, NYSE: BRK.B). World-class companies.

How do you come up with your investment ideas?

Lots and lots of reading and research. Sometimes I’ll take a top-down approach, where I’ll look at the economy or certain industries and work my way down to an individual stock. Other times it could be a bottom-up approach where I find a stock and see why it’s doing good or bad. Is the entire industry doing bad, or just this stock? Is it a broad economic slowdown weighing on shares? Or has the company simply run across tough times?

One of my favorite “themes” if you will is what I call “crisis investing.” This is when a company gets punished for some sort of crisis, usually a temporary one. A good example is American Express.

You might recall awhile back when American Express and wholesale-retailer Costco (NSDQ: COST) had their ugly divorce. American Express was no longer going to be the sole credit card that Costco accepted.

Investors weren’t happy with the ending of the co-branding partnership and shares of American Express tumbled as much as 45%. While the Costco Crisis was a big loss, it wasn’t fatal.

American Express was still a wonderful company with a strong brand, and thanks to the Costco Crisis it was trading for cheap. We jumped at the opportunity. 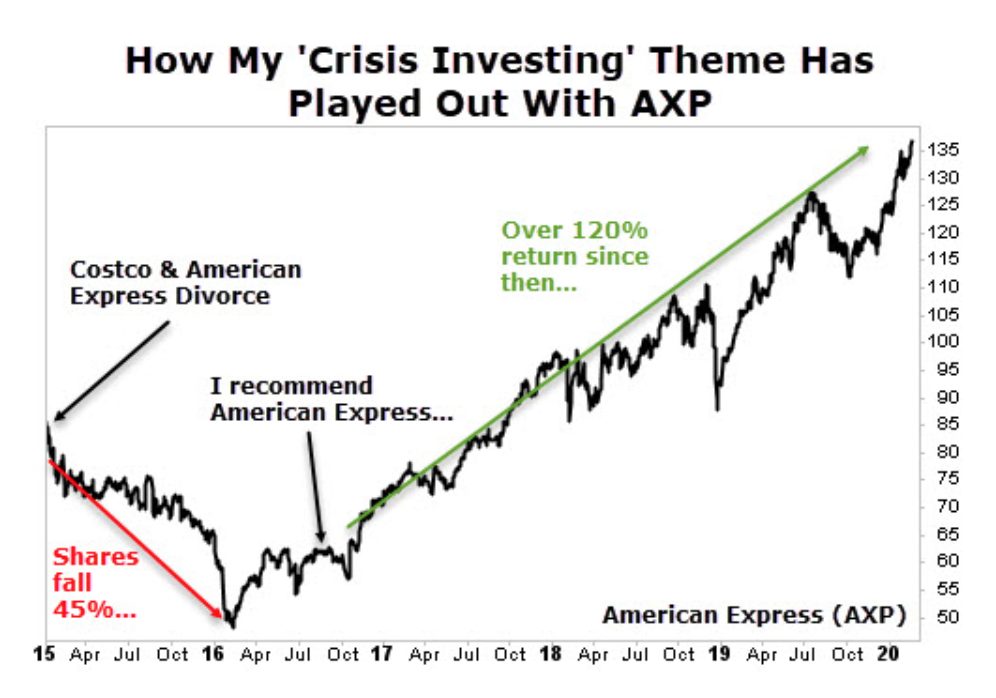 Buying wonderful companies when they go on sale and holding on is about as sure-fire as it gets when it comes to the market.

We’ve executed this strategy numerous times to our benefit. Facebook’s Cambridge Analytica scandal is another good example. Just recently, we scooped up shares of a beaten-down stock in a surging market after it went through its own little crisis (and we’re already up over 40% in just over three months).

What are some other tactics that individual investors can deploy to safely make money in the markets? From my perspective, it starts with three steps: performing due diligence, sticking to the fundamentals, and remaining wary of the herd mentality.

I agree with those three principles. Everyone should do their own due diligence. There’s no one-size-fits-all investment. You have to find what works for you. I see my investment advisory, Top Stock Advisor, as a wonderful tool to help investors wade through all the ticker symbols out there and find potentially market-beating stocks.

I provide analysis on each of the stocks that are recommended, but it’s always wise to do your own research so you’re comfortable with the investment and understand all the risks.

If you can work your way through a company’s fundamentals, you’re already ahead of most investors. I came from the traditional side of investing that is value investing, which is why I’m so passionate about what we do at Top Stock Advisor.

It’s nothing fancy. We aren’t using derivatives or gambling on some no-name, micro-cap company. The goal is to root out companies with wonderful financials and buy them when they are trading at a fair price. Some of the companies you might be familiar with, but many others are likely stocks you’ve never heard of. But as long as it meets our strict criteria, it will be considered. This strategy has worked for Warren Buffett and it’s working for us.

Outside of understanding a firm’s financials, I believe understanding and managing risk will make you an immensely better investor. Whether that’s through position sizing or stop losses, you have to know what your risk is before you get into a trade. Buying a stock is the easy part. Knowing when to sell, whether it’s to book a profit or cut a loss, is what separates a successful investor from one that simply treads water.

The emotional side of investing is where a lot of money is made or lost. But it’s also the least talked about part of investing. Investing isn’t easy. It can be one of the most difficult ways to make easy money. But that’s why we developed Top Stock Advisor, to help investors become more successful. We wanted a strategy that didn’t just tell you what stocks to buy, but more importantly when to sell. And we’ve had great success doing just that.

Editor’s Note: I’ve just discussed with Jimmy Butts his clever (but easy to use) method for legally “hacking” the market. He deploys these tactics in every issue of Top Stock Advisor. Want more details? We’ve put together a presentation that allows you to get started with Jimmy’s recommendations, right away.

Our presentation discusses how one small detail Wall Street analysts missed could add six-figures or more to your retirement account…starting today. Click here for the full story.