Your Next Moves in This Mixed-Bag Market

Stock market conditions right now remind me of the beginning to a classic genre of joke: “I have some good news, and some bad news…”

Investors face a good news/bad news scenario. And it’s no joke. It wouldn’t take much to tip the scales toward negative sentiment and topple this aging bull market.

U.S. gross domestic product (GDP) growth was surprisingly robust in the first quarter, but it’s expected to significantly slow in the second quarter. Business confidence is waning but the consumer continues to spend, with retail sales staying strong.

Global growth is sputtering, but it’s not contracting. Unemployment is low, but wage growth could spark inflation. The trade war continues, but the U.S. and China are returning to the bargaining table. Corporate earnings growth is slowing in the second quarter, but it’s not falling off a cliff.

Let’s reflect on the longest bull market in history, the risks ahead, and how you should position your portfolio now. The rally continues yet the signals are contradictory.

The FOMC is scheduled to release its statement at 2:00 p.m. EDT on Wednesday. Shortly thereafter, Fed Chair Jerome Powell will hold a press conference. The FOMC’s policy statement and Powell’s remarks will be closely scrutinized by investors for market portents.

Don’t read too much into the Fed’s pronouncements tomorrow. The manner in which the press picks apart every vague utterance from the Fed reminds me of how the ancient Romans read animal entrails to divine the future. There’s more superstition than science involved.

As economic data weaken, investors have been hoping for a cut in interest rates as early as July. But that’s a precarious mindset, because if the Fed disappoints, stocks could sharply sell-off.

President Trump has been adding to the uncertainly by putting political pressure on Powell. In an ABC News television interview last Sunday, Trump said:

“He’s my pick. And I disagree with him entirely. Frankly, if we had a different person in the Federal Reserve that wouldn’t have raised interest rates so much, we would have been at least a point and a half higher [referring to the first quarter’s 3.2% rise in U.S. GDP]. I’m not happy with what he’s done.”

It’s an extraordinary break from precedent for the White House to overtly meddle with central bank policy, a fact that further sets investors on edge and sends the chattering class into overdrive.

Stay focused on the numbers…

Instead of following the dubious forecasts of pundits, you should instead keep a careful eye on the hard economic data. Below is a chart of key forthcoming economic reports and events this week that have the power to move markets. 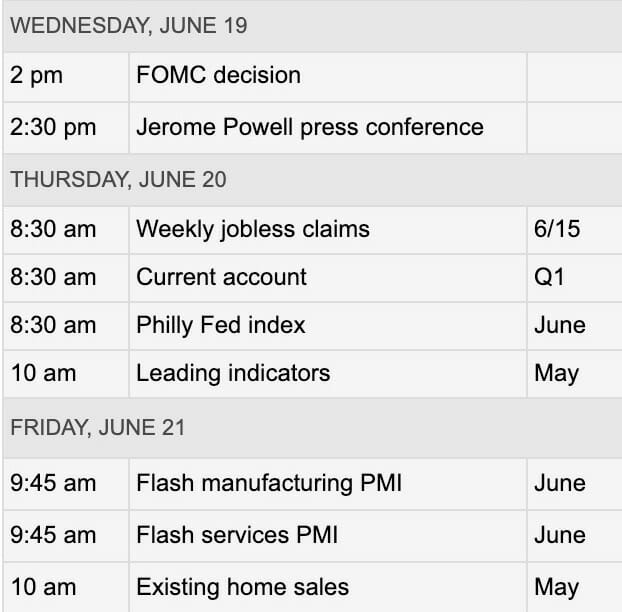 In decidedly negative news for investors on Monday, the Empire State manufacturing survey fell short of consensus expectations and showed a contraction in June.

Analysts expected the New York manufacturing industry, a bellwether for the entire country, to expand. However, the decline of the widely followed business conditions gauge was the worst on record. The New York Fed, which released the report, pointed to escalating tariffs as a major reason.

Investors also are looking ahead to the G20 summit, scheduled for June 28-29 in Osaka, Japan. President Trump and Chinese leader Xi Jinping are expected to meet at the summit to discuss a possible resolution of the trade war. Trump has threatened new tariffs if Xi doesn’t prove conciliatory, but Xi has been digging in his heels.

Wall Street is optimistic. As of this writing on Tuesday morning, the Dow was up more than 300 points after Trump said he would meet with Xi to discuss trade at the G20.

Investors also were cheered when Mario Draghi, president of the European Central Bank (ECB), stated today: “In the absence of improvement, such that the sustained return of inflation to our aim is threatened, additional stimulus will be required.”

I’ll translate Draghi’s bureaucratese for you: with inflation apparently under control in the European Union and within the ECB’s targets, the region’s economy could soon see another infusion of easy money.

Emotions and headline risks are running high; stocks are poised for sharp swings this week. The bull market seems unstoppable. But will the bad news finally overtake the good?

Broadly defined, a bull market is one that rises over time without falling more than 20% from its peak during the period. As I wrote in yesterday’s Mind Over Markets, we’re enjoying the longest bull market ever. Problem is, when easy money is around, greed drives investors to take greater risks than they otherwise would.

You can expect the blow-dried anchors on CNBC, Bloomberg, Fox Business, and the rest of the TV circus to generate a lot of melodrama over this week’s Fed meeting. I like to call television the “lobotomy box.” These cable news programs care about ratings, not your edification. They’re not business shows; they’re show business.

Recognize the simplistic prism through which television news looks at stories. Political coverage emphasizes personalities and the horse race, at the expense of in-depth public policy analysis. Business coverage emphasizes easily understood consumer stories and lionizing portraits of CEOs. Coverage is designed to appeal to the lowest common denominator, to boost audience size which translates into advertising dollars.

How bad is the advice on the cable business gabfests?

Consider the Great Financial Crisis of 2008. As investment bank Bear Stearns was melting down in March of that year, I distinctly remember financial TV celebrities insisting (shouting, actually) that the investment bank was “fine” and investors would be fools to take out their money.

We all know how that turned out. JPMorgan Chase (NYSE: JPM) eventually bought the failing Bear Stearns for $10 per share, far below its pre-crisis 52-week high of $133.20 per share. Bear Stearns’ collapse was a prelude to the global financial collapse and concomitant recession.

Learn to spot the herd mentality. Be suspicious of conventional wisdom; it’s almost always wrong. Generally speaking, if you consistently buy during times of unreasoning fear, and sell during times of euphoric greed, you’ll do well.

Don’t fight the bull market. This record-setting rally has climbed a decade-long wall of worry and made chumps out of the perpetual bears. But it’s time to turn cautious.

Rotate toward defensive sectors, choose value over momentum, and keep plenty of cash on hand. Appealing sectors now are utilities, health services, and consumer staples. These industries tend to perform well during the late stage of an economic cycle.

Utility stocks, in particular, have been on a tear. The benchmark Utilities Select Sector SPDR Fund (XLU) has generated a total return year to date of nearly 16%. That’s roughly equal to the YTD return of the S&P 500, but keep in mind, utilities are considered safe haven investments. Utility investors have been enjoying robust growth and income, while shouldering less risk.

Don’t flee the market, but keep your powder dry. To help offset the bad news, here’s more good news: When the sell-offs come, I’ll steer you toward the right buying opportunities.