Ever been stuck in an elevator? I have, with five other people, near the 18th floor in an office building in midtown Manhattan. It was 1987 and I was working in the building as an editor on Venture magazine, a financial publication. I rang the bell for help and a voice told us to stay calm.

The wait was nerve wracking. About 20 minutes later, after a violent lurch, the elevator started working again and we all laughed nervously in relief.

Later that same year, the markets took the elevator — right through the floor. The “Black Monday” crash of October 19, 1987 eventually bankrupted the magazine. The entire staff was thrown out of work. I found a new job in Washington, DC as a press secretary in Congress, but that’s another story for another day.

There’s an old Wall Street adage: The market takes the stairs up and the elevator down. That’s just a colorful way of saying that the market tends to drop faster than it rises.

We’ve seen this dynamic play out in recent months and it’s likely to become more pronounced as the second half of 2019 unfolds.

Even a hint of bad news has the power to suddenly crush stocks. The markets rise when it appears that the U.S. and China are making progress on trade; they plunge when trade peace doesn’t come. One day, Federal Reserve Chair Jerome Powell says something that the market construes as positive and the markets rise. The next day, Powell makes a vaguely negative statement and stocks tank.

As of this writing on Wednesday morning, the three main U.S. stock indices were trading higher, after U.S. Treasury Secretary Steven Mnuchin told CNBC that “there’s a path” to complete a U.S.-China trade deal. We’re witnessing yet another Pavlovian response from Wall Street.

My advice: Ignore the spin and posturing of government bureaucrats on television. Official assurances are cheap and easily abandoned. During my days as a press secretary for a member of the House, I was always amazed at how willingly the media carried water for public officials.

White noise in the media has been triggering wild market swings. That should trouble you; it’s a sign that the bull market is unhealthy.

The market battles ahead…

As I peer ahead to the second half of this year, I see simultaneous battles waged on many fronts: the U.S. vs. China, Donald Trump vs. Powell, economic expansion vs. recession, earnings growth vs. earnings slowdown.

President Trump and Xi Jinping are scheduled to meet at the G20 summit, which starts Friday. Investors are hoping that a trade truce will be achieved, but I’m skeptical. Trump probably wants to continue bashing China, all the way up to the 2020 election. It plays well with his base. If the G20 meeting proves to be empty theatrics, as I think it will, investors will be disappointed and stocks could sell off.

Economists at UBS Group (NYSE: UBS) said Monday that failure at the G20 to stem the trade war would greatly increase the likelihood of a global recession and bear market in the second half of 2019.

Federal Reserve policy also is whipsawing investor emotions. Last week’s Federal Open Market Committee (FOMC) meeting gave markets what they anticipated: the status quo on rates, but the removal of the word “patient” in the statement, which investors interpreted as setting the table for a rate cut as early as July. In the immediate wake of the FOMC meeting, markets rose.

But consider yesterday’s stock market decline, triggered by Powell’s “on the one hand, on the other hand” remarks. As Powell said in a prepared statement:

Against the backdrop of heightened uncertainties, the baseline outlook of my FOMC colleagues, like that of many other forecasters, remains favorable, with unemployment remaining near historic lows. Inflation is expected to return to 2% over time, but at a somewhat slower pace than we foresaw earlier in the year. However, the risks to this favorable baseline outlook appear to have grown.

Powell cited the trade war and slowing global economic growth as risks. He reiterated that the Fed would “act as appropriate to sustain the expansion,” which is Fed-speak for leaving the door open to a rate cut this year.

But it wasn’t enough for Donald Trump, who has broken precedent by attacking his own Fed chair. Trump likened Fed officials to “a stubborn child” and again called for an accelerated timetable of rate cuts.

The Trump-Powell battle has prompted investors to embrace safe haven investments. Long-term Treasuries are getting bid up as traders expect a near-term cut to interest rates. Other safe haven assets, such as utility and real estate stocks, as well as gold, are enjoying a tailwind.

Then there’s the rising risk of recession. Damage from tariffs and the concomitant slowdown in global growth have stoked recession fears. Exacerbating the pressure is the inverted yield curve. The yield spread between the 10-year Treasury note and the 3-month Treasury bill has been in inverted territory for about a month — that’s a time-proven warning of a looming recession.

Economic cycles typically last between five and eight years; the current expansion is more than 10 years old. We’re overdue for a downturn. The big question is, will the economy execute a soft or hard landing? It’s foolish to try and time these things, but the pronounced slowdown in corporate earnings growth seems to indicate that the landing could be hard.

What about corporate earnings growth in the third quarter? Are analysts pessimistic? Yep.

Consensus estimates for earnings growth for Q3 have been falling over the past few months. As of this writing, the expected earnings decline stands at -0.3% (see chart). 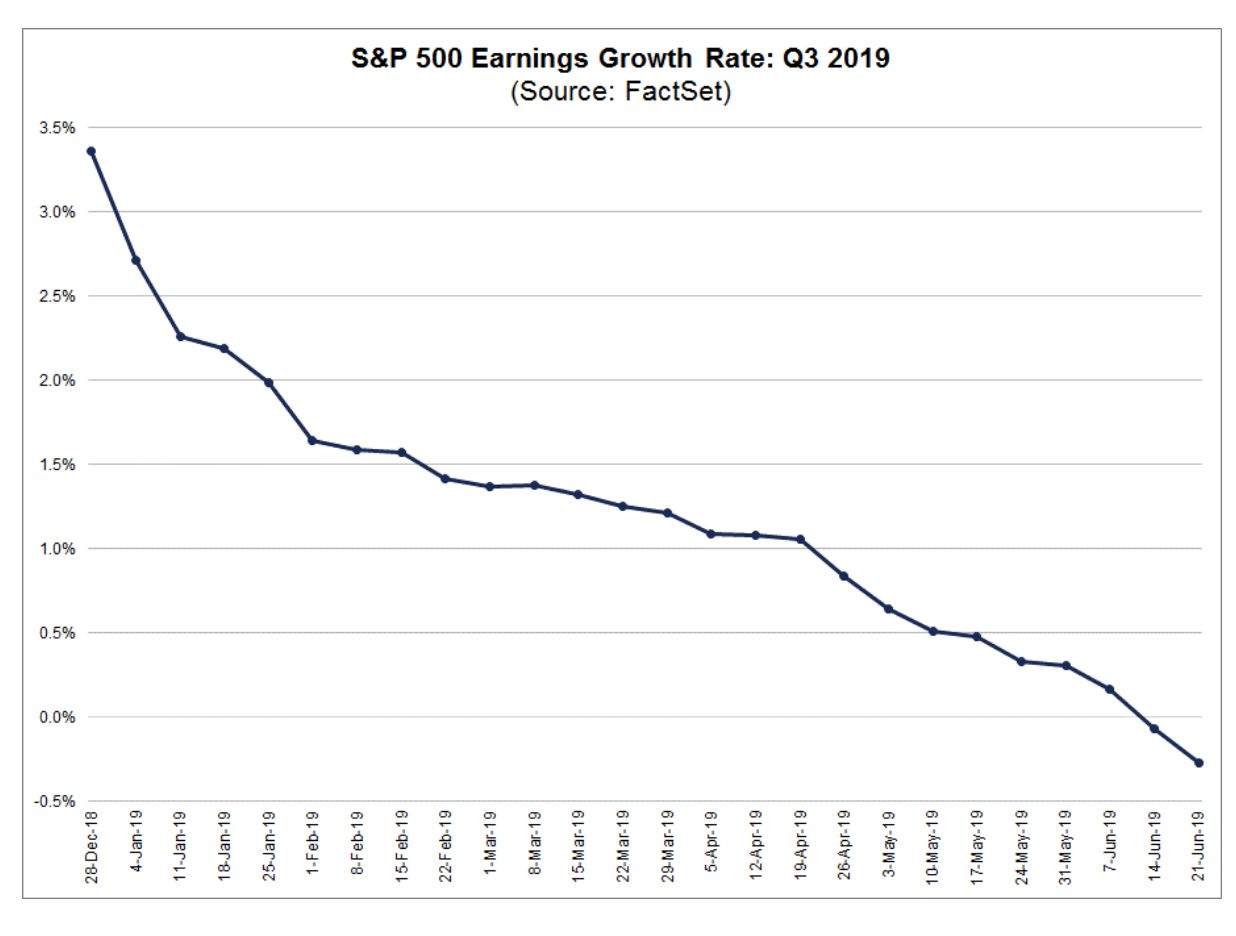 What’s hurting corporate earnings? The stimulus from the 2017 tax cut is wearing off, just as the deleterious effects of tariffs kick in. The trade war is dampening global growth and undermining business confidence. The International Monetary Fund recently cut its outlook for global growth to 3.3%, the lowest since the 2008-2009 financial crisis.

Wall Street is pricing in a rate cut, which is a dangerous assumption. Powell has pointedly defended his autonomy against the president’s attacks. Unless there is a pronounced deterioration in economic data between now and the end of July, the Fed will probably stand pat. That would leave many investors disappointed and weigh on stocks, but over the long run it would be a prudent move for the central bank. The Fed will need some tools at its disposal, when the economic downturn actually hits.

Indeed, Goldman Sachs (NYSE: GS) recently predicted that the Fed won’t cut rates this year and dismissed such hopes as misguided. Problem is, further easing is now baked into the markets.

Betting on government policy, or trying to time the economic cycle, is like gambling in Vegas. Don’t make decisions based on your hopes; follow the actual data and stick to your long-range investment goals. When building wealth, take the stairs. Don’t get trapped in an elevator that’s going down.