Sometimes, as I cover the continuing trade war and its incessant round of tit-for-tat tariffs, I feel like Bill Murray in the 1993 movie Groundhog Day, where events keep repeating themselves ad nauseam.

During the first half of 2019, the markets sharply rose and fell according to the whims of trade negotiators and policymakers. An encouraging press release sent stocks up; a belligerent tweet sent them down.

And so the familiar pattern resumed this week, as the markets cheered hints from the G-20 summit that maybe, just maybe, the on-again, off-again trade war was off again.

Another meeting between President Donald Trump and Chinese President Xi Jinping is over. Another trade war “truce” has been announced with great fanfare. Another burst of optimism has sent stocks higher.

And just like the hapless character played by Bill Murray, I get a distinct feeling of déjà vu.

The trade ceasefire reached at this past weekend’s G-20 meeting in Osaka, Japan is just like the one at the G-20 last year in Buenos Aires, Argentina.

Back then in Buenos Aires and now again in Osaka, the leaders of the world’s two largest economies staged a series of photo-ops; news anchors regurgitated government pronouncements, with little critical analysis; the air was thick with platitudes and short on specifics; and relieved investors bid-up stocks.

The most significant result in Osaka was the U.S. agreement to resume sales of products to Huawei Technologies, the Chinese telecom equipment manufacturer. Beaten-down shares of semiconductor makers soared on the news.

The supposed trade truce also avoids the next round of Trump’s threatened tariffs on an additional $300 billion worth of China-sourced imports and it requires China to stop penalizing U.S. soy purchases.

Reassured investors are conveniently forgetting that so far, $250 billion worth of China imports remain tariffed at 25%. Tariffs are difficult to reverse and they’re already undermining business confidence and squeezing corporate profit margins.

Similarly, the “historic” meeting between Trump and North Korean leader Kim Jong Un produced a lot of telegenic images but bore little in the way of tangible achievements. For you as an investor, it’s a reminder to ignore atmospherics and stick to the fundamentals.

Investors got whipsawed during the first half of 2019, with stocks sharply rising or falling related to rapidly shifting sentiments on recession, trade fears and interest rates. The chart tells the story: 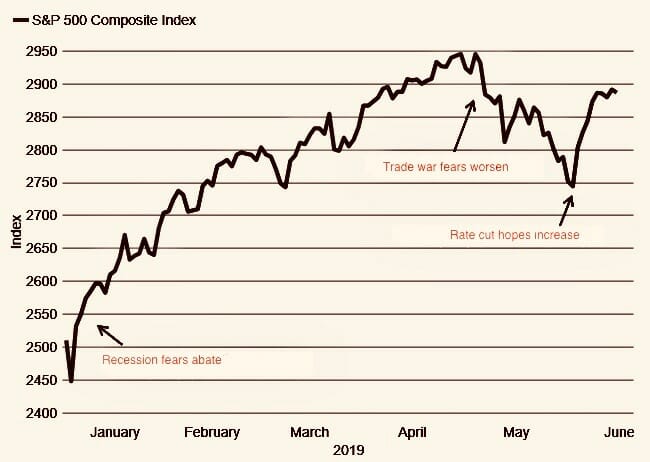 Responding in impulsive fashion to exaggerated headlines is no way to invest.

Chief among investor concerns is the U.S.-China trade war. This week, progress appears at hand. But as I mentioned, haven’t we seen this movie before? One day the trade war is on. Next day, it’s off. Small wonder that the markets have been so volatile this year.

As we’ve seen so far this week, Wall Street succumbs to wishful thinking whenever a government official makes a soothing statement about trade. Days (sometimes hours) later, those hopes are dashed when the Tweeter-in-Chief posts a tweet that reverses course. Stocks plunge again. It’s a roller-coaster that can be dispiriting for even the most seasoned investor.

I also think investors are basing too much of their hopes on potential Federal Reserve short-term interest rate cuts. Fed funds futures are pricing in a roughly 90% chance of two cuts by the end of the year. That seems unrealistic.

Federal Reserve Chair Jerome Powell is trying to walk a tightrope — he doesn’t want to choke off the recovery by raising rates but he also has a responsibility to keep inflation in check. Powell is under enormous pressure from President Trump to stimulate the economy by cutting rates, but Powell has pointedly asserted his independence from political meddling.

Unless the economy shows clear signs of deteriorating, the Fed is unlikely to engage in monetary easing this year. Most economists (those who aren’t political hacks, anyway) agree that it would be reckless to loosen the spigots again after a decade of easy money. The Fed also wants to retain some leeway for when the downturn actually hits.

The biggest variable at work right now? The 2020 election. Policy pronouncements come and go, especially under the mercurial Trump regime. The president seems intent to pursue protectionism, to appeal to his base, all the way up to the election. The election is still a long way off, which means a genuine resolution of the trade war remains a long way off, too. Stay patient and don’t get whipsawed by the news.

Keep your eye on the hard data. During this holiday-shortened Fourth of July week, crucial economic numbers are scheduled for release. Below is a table of reports on the docket in coming days with the power to move markets. 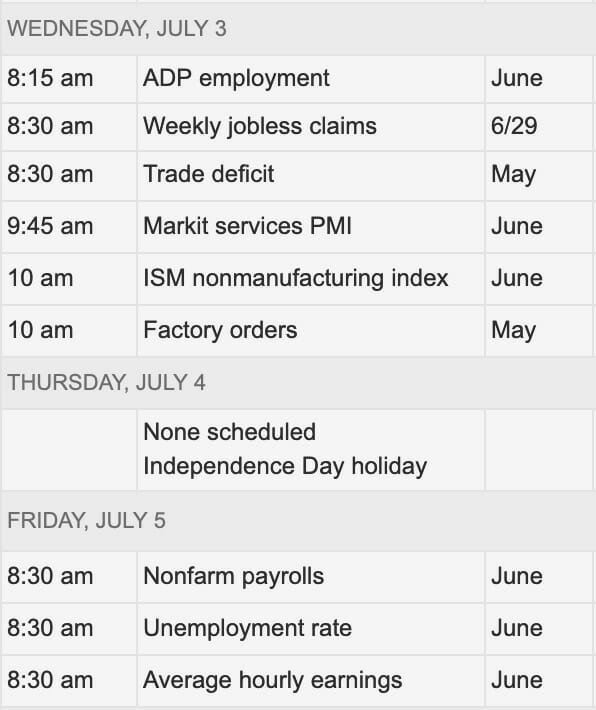 Employment figures will loom large this week. A lynchpin of this bull market has been low unemployment, which currently stands at a 50-year low of 3.6%. A robust job market has kept consumer spending buoyant. Strong job creation also has driven wages higher, albeit not at a rate that makes inflation a threat (at least not yet). Data this week will provide more clues as to how long these “Goldilocks” conditions can last.

The slump of crude oil prices could indicate that an economic slowdown is ahead, but the benefit is lower energy costs for consumers and many businesses. This July Fourth, American drivers will enjoy lower prices at the gas pump, which further enhances overall optimism in their financial condition.

How should you trade now? Generally speaking, rotate toward defensive sectors, choose value over momentum, and keep plenty of cash on hand.

It’s been an electric year for the “safe haven” utility sector. For the first six months of 2019, the total return of the benchmark PHLX Utility Sector Index (UTY) was 13.5% compared to 17.3% for the S&P 500. Keep in mind, that’s an impressive return for income-oriented equities that are considerably safer than the more growth-oriented fare in the S&P 500.

Utility stocks are supposed to be boring. But like my “boring” Volvo sedan, sometimes boring is better. Utilities are poised to continue their outperformance for the rest of the year, as investors seek safety and steady dividends in volatile times.

The upshot: Stick to the facts. Avoid the predictable knee-jerk behavior of crowds. When you’ve been investing long enough, you’ve seen it all before.

Send your comments and questions to: mailbag@investingdaily.com