All Cylinders Firing: Every Sector Rises in First Half

According to the Select Sector SPDR exchange-traded funds (ETFs) that divide the S&P 500 into sector index funds, every sector gained in the first half of the year. However, there were steep sell-offs during the second quarter in crude oil and natural gas. The price declines caused the energy sector to decline in the second quarter; the only sector to see a second quarter decline.

Let’s dissect the first half and second quarters of 2019, sector-by-sector. I’ll also provide insights on how you should position your portfolio for the rest of the year.

Five sectors outperformed the S&P 500 during the first half of 2019. 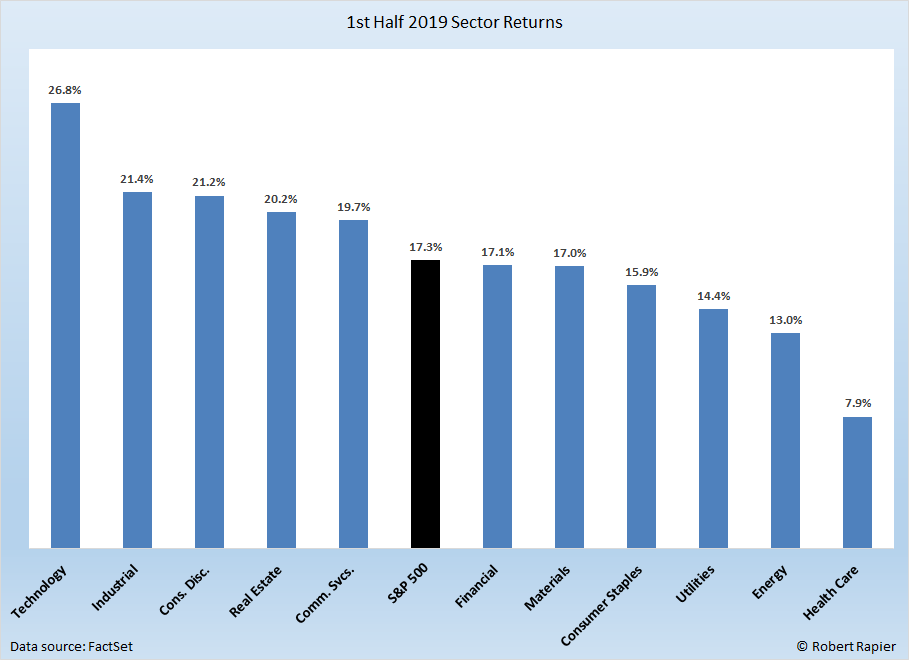 Technology was the half’s biggest winner, with a gain of 26.8%. This sector includes technology hardware, storage, and peripherals; software; communications equipment; semiconductors and semiconductor equipment; IT services; and electronic equipment. Components of this ETF include Apple (NSDQ: AAPL), Microsoft (NSDQ: MSFT), and Intel (NSDQ: INTC).

The Industrial sector continued its resurgence, with a first half gain of 21.4%. Component industries include aerospace and defense, building products, construction and engineering, electrical equipment, conglomerates, and machinery. Important constituents of this sector include Boeing (NYSE: BA), 3M (NYSE: MMM), and Honeywell (NYSE: HON).

The Consumer Discretionary sector continued its strong performance from 2018, returning 21.2% in the first half. This sector includes industries such as automobiles and components, consumer durables, apparel, hotels, restaurants, leisure, media, and retailing. It is comprised of companies such as Amazon (NSDQ: AMZN), Home Depot (NYSE: HD), and Walt Disney (NYSE: DIS).

The Real Estate Index, consisting primarily of real estate management and development companies and real estate investment trusts (REITs), was the final member of the >20% club in the first half with a return of 20.2%. Simon Property (NYSE: SPG) and American Tower (NYSE: AMT) are among the largest representatives of this group. 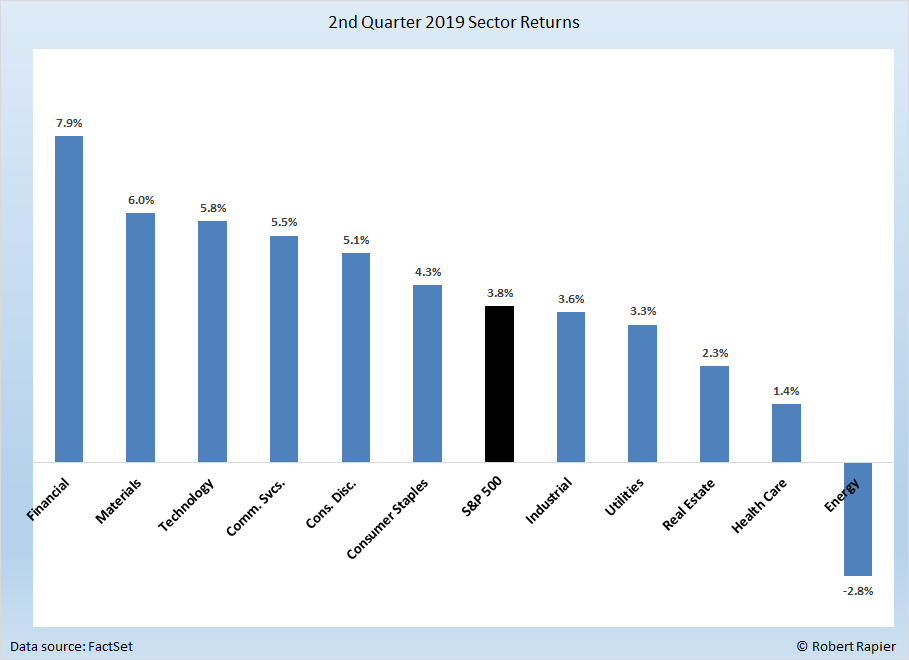 The Materials sector rose 17.0% in the first half. This sector includes companies that produce chemicals, construction materials, metals and mining, and paper and forest products. Among its largest components are DowDuPont (NYSE: DWDP) and Sherwin-Williams (NYSE: SHW).

The Utilities sector was one of the laggards of the first half, with a 14.4% return. It also lagged the S&P 500 during the second quarter. However, the utilities sector is the top-performing sector over the past year, with a total return of 18.6%. Companies that produce, generate, transmit or distribute electricity or natural gas predominantly make up the Utilities sector. Component companies include NextEra Energy (NYSE: NEE), Duke Energy (NYSE: DUK), and Dominion (NYSE: D). 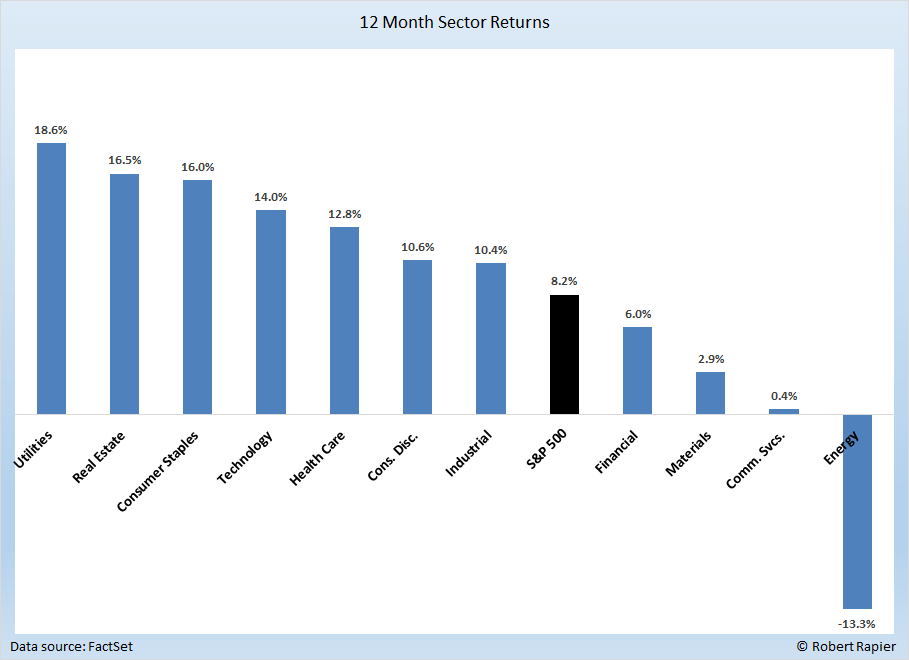 The Energy sector was another laggard during the first half, with a total return of 13.0% (and a strong Q1). However, the energy sector has seen two abysmal quarters over the past year on the back of volatile oil and gas prices. Energy is the only sector of the S&P 500 with a negative return over the past year. Some of the energy sector’s biggest holdings are ExxonMobil (NYSE: XOM), Chevron (NYSE: CVX), ConocoPhillips (NYSE: COP), EOG Resources (NYSE: EOG), and Schlumberger (NYSE: SLB).

The Health Care sector was in last place for the first half with a 7.9% gain. Health Care has been a top-performing sector for years, and is up 12.8% over the past year, which is fifth best among all sectors. This sector includes health care equipment and supplies, health care providers and services, biotechnology, and pharmaceuticals industries. Bellwethers in the health care sector include Johnson & Johnson (NYSE: JNJ) and Pfizer (NYSE: PFE).

If you attempt to time your investments according to the business cycle, the economy is presently in the late-cycle stage, where economic growth rates start to slow as credit tightens. Recession typically follows the late-cycle phase, and some recession indicators have been flashing.

The consistent overperformers during the late-cycle are defensive and inflation-resistant sectors: the energy sector, the health care sector, and the materials sector.

This time, I will note that energy seems to be becoming a relatively better value given its recent underperformance and the present business cycle stage. Health care would be a close runner up.

The utilities and the consumer staples sectors generally outperform during the late business cycle, but they are also consistent outperformers during the recession phase that often follows. Of note, both sectors outperformed the S&P 500 over the past year, although both lagged the index in the first half.

As I’ve just explained, investors have enjoyed a stellar first half of 2019. But will the rest of the year prove as profitable?

When it comes to profitable trading, few experts beat the markets as consistently as Jim Fink. We’ve just released Jim’s new presentation. It explains how average retail investors can use one simple technique to earn steady income payments of $1,150, and $1,500, and even $2,800… every single week.

This is something you won’t want to miss. Here’s what one loyal follower recently wrote:

“Your investing technique is simply outstanding! I’ve been using it to make steady income for over two years now.”

Would you like a $1,692.50 “paycheck” on Thursday, July 11? And every Thursday after that? Click here now to learn the details.