Don’t Get Out Over Your (Water) Skis

During last week’s July 4 festivities in my backyard, as I grilled my famous Tandoori chicken, the assembled family discussed the state of the economy and their portfolios.

With the second half of the year underway, there are plenty of reasons for investors to wave the flag and cheer. In the U.S., gross domestic product growth in the first quarter posted a robust 3.1%; unemployment hovers at 3.7%, a 50-year low; and the major stock market indices have broken record highs. For the first six months of 2019, the S&P 500 returned 17.3%.

The adults at my July 4 get-together — all of them red-blooded patriots and retail investors — should have been happy about their future investment prospects. But worry was pervasive.

Here’s what I told them and I’ll repeat it for you:

Re-balance your portfolio toward safer havens, such as utilities and real estate; keep plenty of cash on hand; and pocket at least partial gains from overpriced media darlings (e.g., brand name Internet stocks) that have already enjoyed big run-ups. Celebrate the bull market; enjoy the summer. But don’t get too far out over the tips of your water skis. 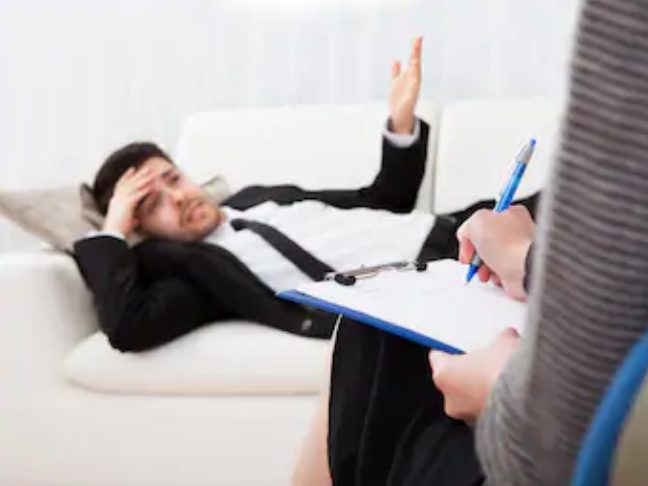 Psychiatrists call it cognitive dissonance, the mental discomfort experienced by someone who holds two or more contradictory beliefs. It’s a form of psychological stress that can paralyze decision making.

Accordingly, the economy is sending dissonant signals, which makes it difficult to position your portfolio for the months ahead.

The U.S. consumer remains in a buoyant mood, with retail sales on an upward trajectory. The Commerce Department reported on June 28 that consumption spending rose a strong 0.4% in May over the month of April, with an 0.5% rise in personal income.

But businesses are less sanguine. Corporate leaders anticipate a slowdown ahead, perhaps even a recession. The trade war and the waning benefits of the 2017 tax cut are impeding business investment. Businesses for the most part didn’t plow the tax windfall into capital expenditures for future organic growth. Most of the money went to stock buybacks and now the economy is paying the piper.

What’s worse, several recent readings of industrial activity, both in the U.S. and overseas, show downward momentum. Manufacturers are preparing for hard times.

Macroeconomic Advisers reported on July 2 that small business job growth slowed in June. The research firm also pinpointed two contradictory trends: for the second quarter, personal consumption rose at a 3.7% annual rate, while business spending on structures and equipment fell at annualized rates of 4.6% and 4.4%, respectively.

So who’s right about the future? Consumers or businesses? The disconnect can’t go on forever. Eventually, business pessimism will become self-fulfilling.

Deteriorating business confidence, combined with the damage from tariffs, will probably prompt employers to pull back on hiring. As the job market gets weaker, consumers will lose confidence, tighten their purse strings, and the economy will slump.

The two moods — the optimism of consumers and the pessimism of business — already appear to be converging, on the downside. New data show that consumers, although still spending money, are turning dour.

The University of Michigan’s latest consumer sentiment survey, released June 28, showed that consumer expectations for the future fell substantially in June, with an index reading of 89.3, down from 93.5 in May.

The Conference Board’s latest consumer confidence survey also showed a steep decline, falling to 121.5 in June from 131.3 in May, ending three consecutive months of improvements and marking the lowest level in nearly two years.

Now that the July 4 holiday festivities are over, the market is launching into second quarter earnings season. The research firm FactSet warns that an earnings recession could be around the corner. FactSet’s estimated year-over-year earnings decline for the second quarter for the S&P 500 stands at -2.6%. The trade war was cited as a major reason for falling corporate profits.

In March 2018, President Trump infamously declared that “trade wars are good and easy to win.” But there’s already one big loser in the trade war: the American consumer.

Economists at the Federal Reserve Bank of New York estimate that the average U.S. household will end up paying more than $1,000 a year in higher prices because of the Trump administration’s tariffs on Chinese goods. Once these costs become apparent to consumers, you can expect their confidence to tumble.

Underpinning stocks has been the hope that the Federal Reserve will cut interest rates this month. That hope is waning.

Fed Chair Jerome Powell’s remarks in June were initially interpreted by most of Wall Street as dovish and a sign that monetary loosening was on its way. Powell indicated that the central bank was ready to take “appropriate” action to sustain the economic expansion if the trade war weighed on growth.

However, Goldman Sachs (NYSE: GS) has thrown cold water on the idea of another rate cut. In a recent note, the investment bank stated:

Although it is a close call, we still expect the FOMC to keep the funds rate unchanged in the remainder of the year. In our view, this was not a strong hint of an upcoming cut but was simply meant to provide reassurance that the FOMC is well aware of the risks from the trade war. A speech from the Chair focused exclusively on longer-term issues at a time of sharply increased worries about trade policy might otherwise have come across as “out of touch” to some market participants.

I stated in my July 3 issue of Mind Over Markets that an interest rate cut is unlikely this month. The latest data support my contention.

The U.S. government jobs report released July 5 was a mixed-bag, but here’s the key and it was strongly positive: non-farm payrolls in June posted a greater-than-expected jump. Employers added 224,000 jobs, indicating that the economic expansion lives on.

Hourly wage growth missed expectations in June but remained on track, albeit at a paltry level. The headline unemployment rate ticked up from 3.6% to 3.7%. It’s worth noting that he recovery is occurring along two tiers, with 40% of Americans in a recent survey saying that they have trouble paying their basic bills.

President Trump last Saturday stepped up his attacks on his own Fed chairman, saying the independent central bank should be more dovish. Trump said the Federal Reserve was the “most difficult problem” facing the U.S., but Trump’s protestations are probably falling on deaf ears at the Fed.

Read This Story: Your Next Moves in This Mixed-Bag Market

The economic news also is mixed from the world’s growth engine, China. Take a look at this chart: 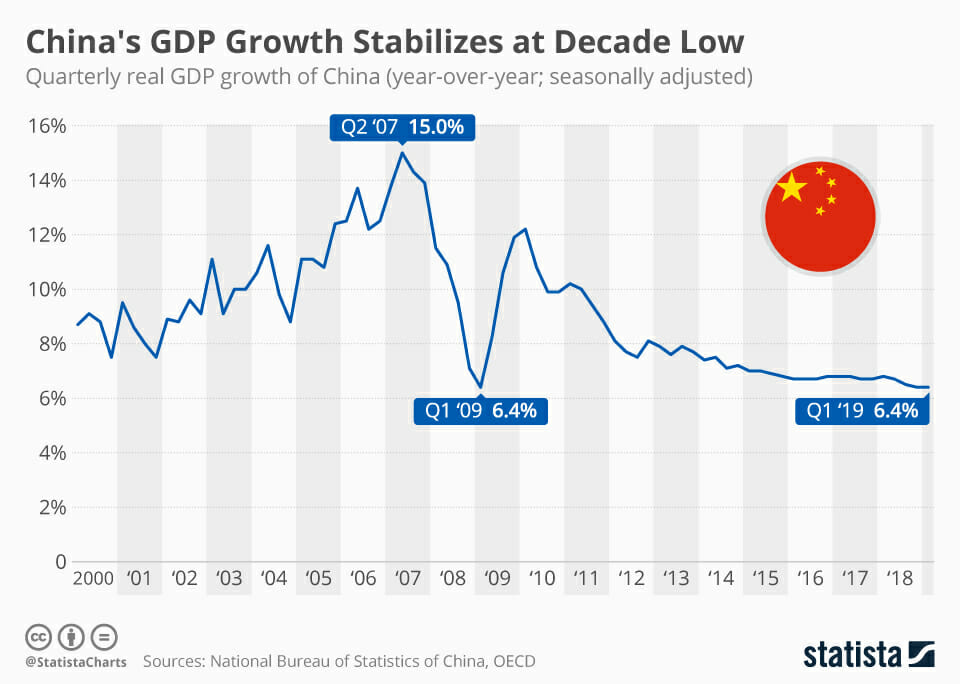 China’s economy grew by 6.4% in the first three months of the year, matching the previous quarter’s growth rate at the lowest level in nearly 30 years. That’s a cause for concern; the trade war is expected to further dampen Chinese growth for the rest of the year.

And yet, this first-quarter growth rate is better-than-expected and reflects a stabilization of China’s economy, easing fears of a “hard landing” for the country’s economy.

To be sure, profitable investment opportunities still abound at home and overseas. Stocks could continue rising this year. But it wouldn’t take much to trigger a big selloff; the absence of a rate cut this month is just one potential trigger.

Appealing sectors now are utilities, real estate and consumer staples. Utility stocks in 2019 have been, well, electric. The benchmark Utilities Select Sector SPDR Fund (XLU) has generated a total return year to date of 16.4%, compared to a YTD return of 20.4% for the “growthier” and riskier SPDR S&P 500 ETF (SPY).

Utility stocks should continue to perform well this year. Utilities provide services everyone needs and they’re insulated from trade war because they derive most of their sales domestically. Also, as bond yields lag, the steady dividend yields of utility companies offer an attractive alternative to bonds.

Sub-sectors of the utility industry, such as water utilities and renewable energy producers, are especially attractive from a growth-and-income standpoint. These niches enjoy multi-year tailwinds that should prevail despite economic and market ups and downs.

In the current “Goldilocks” economic context, the Fed will have a tough time justifying a rate cut this month. This fact is dawning on Wall Street. In the wake of last Friday’s job report, the three major U.S. stock indices closed the day in the red, because sometimes, good news is bad news.

As of this writing on Monday morning, stocks were trading sharply lower amid fading hopes for a rate cut in July. Keep your footing in the choppy conditions ahead.

Questions about the economy and markets? Drop me a line: mailbag@investingdaily.com.

John Persinos is the managing editor of Investing Daily, as well as the premium trading service Utility Forecaster.